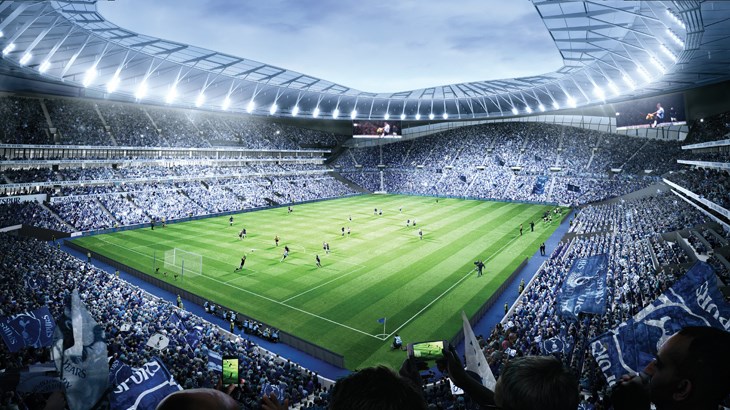 It is the moment Tottenham Hotspur’s fans have been waiting for, as the Club announces Season Ticket details and renewal process information for the 2018/2019 campaign; the landmark first season in their brand new home.

Spurs have also this week revealed a range of exclusive, never-before-seen visuals, of what the inside of the new stadium will look like:

The renewal packs provide full details on what fans can look forward to at the New Spurs Stadium to help fans decide their preferred seat location and can be viewed in PDF format HERE. The information will also be available on the New Stadium section of the Club’s website later.

CLICK HERE to take a virtual look around the new stadium and the views from all the areas using Spurs Interactive Stadium Map…thanks to 3D Digital Venue. 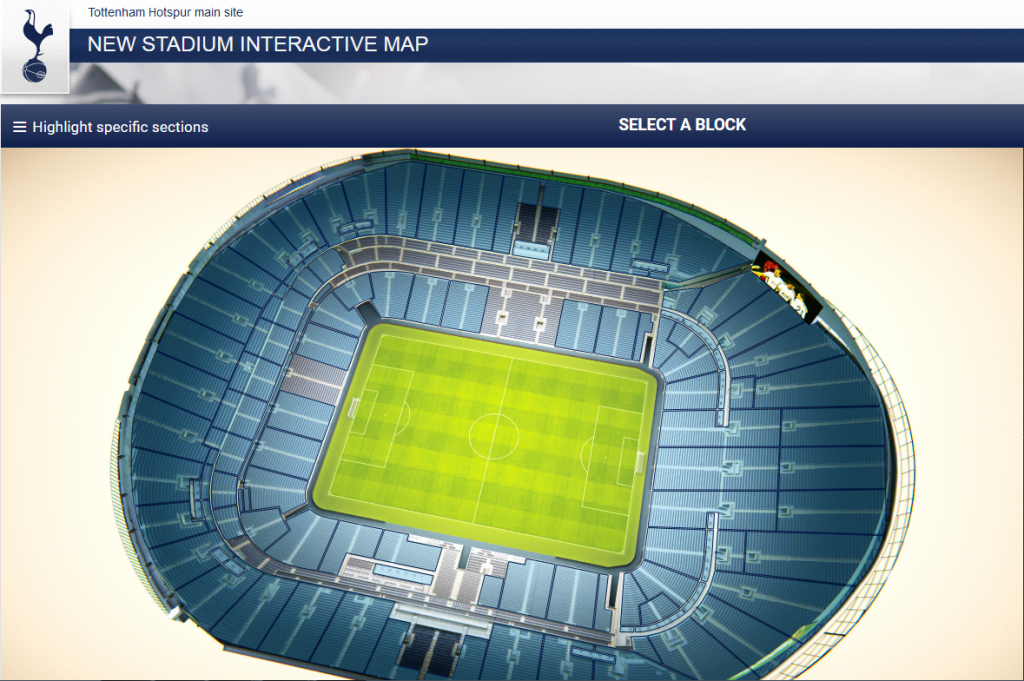 •    Season Tickets have been doubled from White Hart Lane to 42,000
•    Senior and Junior concessions on selected seats are available in all stands
•    A new Young Adult concession category has been introduced for 18 to 21 year olds
•    A designated Family Area has been created in the North West corner, offering a tailored experience for fans attending with children
•    New Ticket Share and Ticket Exchange systems are being introduced – for use when Season Ticket Holders are unable to attend matches
•    Dedicated sections in the South Stand and Away area have been future-proofed for Safe Standing
•    The club’s highly accessible stadium has seating for disabled fans available in all stands, the ability to sit with family and friends, a Sensory Suite and Changing Places facilities
•    A seating bowl designed to place fans closer to the pitch than at any other comparable size stadium in the UK, with distances from the front row to the touchline ranging from just 4.9 metres to 7.9 metres.
•    Over 60 food and drink outlets, three feature bars along with The Market Place, the home to our 65 metre Goal Line Bar, the longest bar in the UK, offering an impressive choice of delicious food options, are available
•    Bright and open concourses, giving supporters the freedom to move around the stadium, embedded with aggregate from White Hart Lane
•    A well-connected, cashless stadium 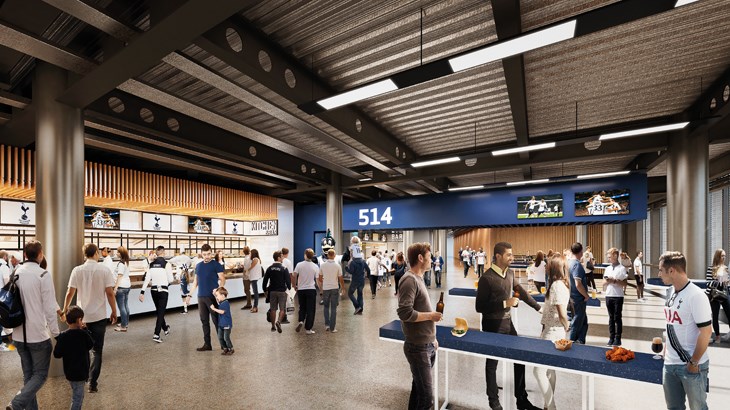 The new world-famous home of the Spurs

Spur’s new home will be a stadium for everyone, offering each and every fan an exceptional matchday experience.

This will be London’s largest football club stadium with a capacity of more than 62,000 and you will be amazed at just how intimate and close to the action you will feel with a seating bowl designed to place fans closer to the pitch than at any other comparable size stadium in the UK.

Distances from the front row to the touchline range from just 4.9 metres to 7.9 metres. The angle of the stands is set at up to 35 degrees and this, combined with the close proximity, will help connect you to the play.

There are four giant HD screens, the largest in the UK, and a state-of-the-art sound system. This will ensure that we can deliver pre-match, half-time and post-match entertainment, highlights and replays to the highest possible standard.

The comfortable modern seating will offer generous leg-room and uninterrupted views of the pitch. In addition, the new stadium is fully compliant with the Accessible Stadia Guide and exceeds standards in many areas. It also offers the widest distribution of accessible areas possible, across all stands, including the single-tier South Stand, and our flexible design allows family groups to sit together.

In the bowl, fans and visitors alike will enjoy high-density mobile connectivity and free Wi-Fi.

The design of the stadium bowl optimises the atmosphere created, ensuring the Club maintains its tradition of having one of the most atmospheric homes in British sport.

The club’s 17,500-seat, single-tier, South Stand, the largest in the UK, is more than 34 metres in height and will provide a ‘wall of sound’. An area at the front of this stand, as well as in the visiting supporters’ section, has been future-proofed for safe standing in the event that legislation changes.

Make yourself at home

Whatever a fan’s choice of seating location, they will enjoy an exceptional standard of matchday experience.

The generous and open concourses are bathed in natural light from extensive glazed areas with contemporary polished concrete floors made using aggregate from White Hart Lane. Unrivalled standards of finishes, using materials such as brushed steel, copper, European oak and quartz, can be witnessed in the new stadium.

Supporters will have the freedom to move around the concourse from stand to stand, so they can explore and meet fellow fans located in other stands. A Family Area concourse will offer a tailored experience for fans attending with children, situated in the North West corner.

Around the concourses are areas for pop-up experiences, including promotions and competitions, Legend appearances and other selected entertainment. There are also high quality wash rooms and plenty of them for all, including 30 accessible toilets, 1,000 URIMAT Compact Plus waterless urinals (which have also been installed at Silverstone, FC St Gallen, FC Basle, Servette FC, RCD Espanyol, FSV Mainz and Neuchatel Xamax) and three Changing Places facilities.

For fans with sensory needs, a fully-equipped Sensory Suite has been incorporated to provide an environment that facilitates a graduated pathway to watching a live match. For supporters with access requirements, there will be designated accessible entrances with large passenger lifts to all levels.

Boasting some 60 food and drink outlets – along with The Market Place, the club’s street food-style emporium in the South Stand – that will serve a wide range of delicious food. Spurs are taking inspiration from London’s vibrant street food market scene and will create a range of diverse menus along with traditional fan favourites. Selected signature dishes from The Market Place will be available from outlets in all the Stands. 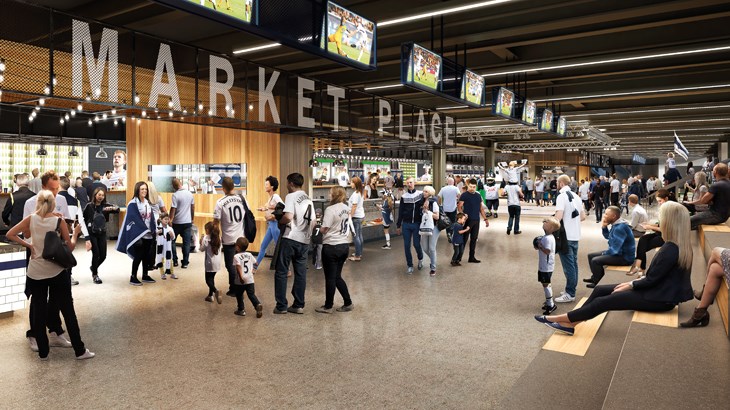 The Market Place: a street food-style emporium in the South Stand

Feature bars in the East and West Stands create a destination for fans to meet up before and after the match. They will be surrounded by the matchday buzz in a ‘high street pub style’ experience and be able to enjoy a fantastic range of beers, wines, ciders and soft drinks. Feature bars include:

–    The Dispensary (West Stand, Level 5) – Takes its name and design influence from the old Dispensary on the Tottenham High Road. The salvaged frontage of this building will be a feature of the Tottenham Experience.

–    The Shelf (East Stand, Level 1) – The Bricks have been salvaged from the East Stand of White Hart Lane whilst the metal work on the bar is inspired by the Archibald Leitch design for the old Shelf. 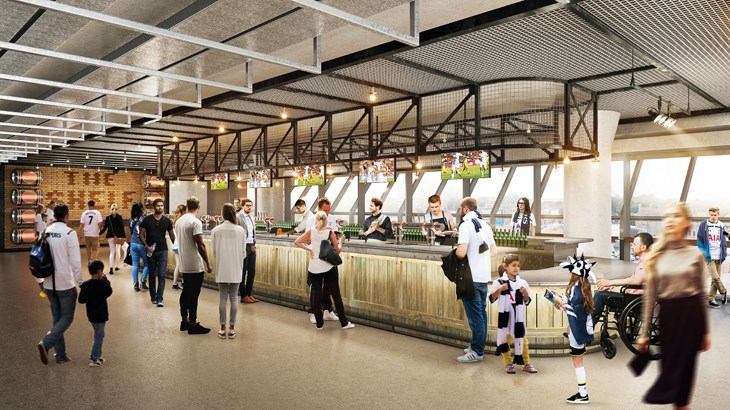 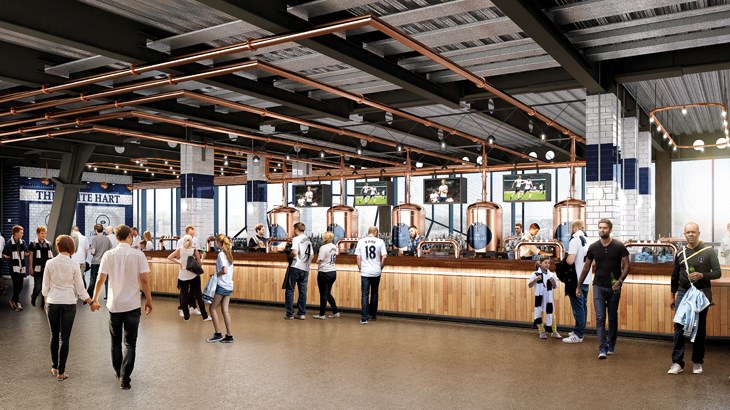 At the rear of The Market Place in the South Stand is the 65 metre Goal Line Bar that runs the entire length of the goal line. Serving a wide range of beers, wines, ciders and soft drinks, along with food items from fan favourites range, this bar is the longest in the UK. Craft beer will be brewed on-site in the club’s very own microbrewery and served from our unique and atmospheric tap room. 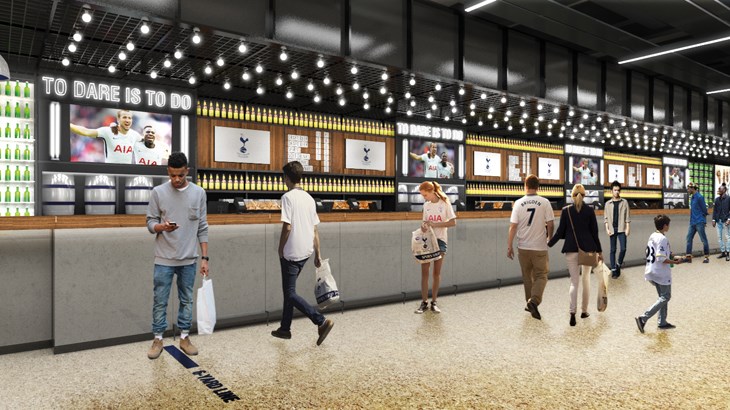 After the match, The Market Place becomes the perfect destination to meet up with friends and family for a post-match drink or snack, with street-style food and a large range of drink options remaining available until well after the final whistle. A dedicated stage will also play host to a programme of post-match entertainment, including live music, Legends Q&A’s and DJ sets. Other English Premier League (EPL) matches that are being broadcast will also be shown on screens post-match.

The stadium has been designed with technology incorporated into the fabric of the building to enhance the fan experience, with free Wi-Fi in all areas and high-density mobile coverage.

A new free mobile app will be available to help fans get the most out of their match day experience and state-of-the-art turnstile systems will accept either Stadium Access Cards or else fans can access the venue via mobile ticketing on their smart phones.

In the new, well-connected cashless stadium, all payments are to be made using either a contactless card or via mobile phones to help speed up service.

For further information on Ecoprod’s installation of some 1,000 URIMAT Compact Plus waterless urinals in the new stadium, click here or on the banner advert below.