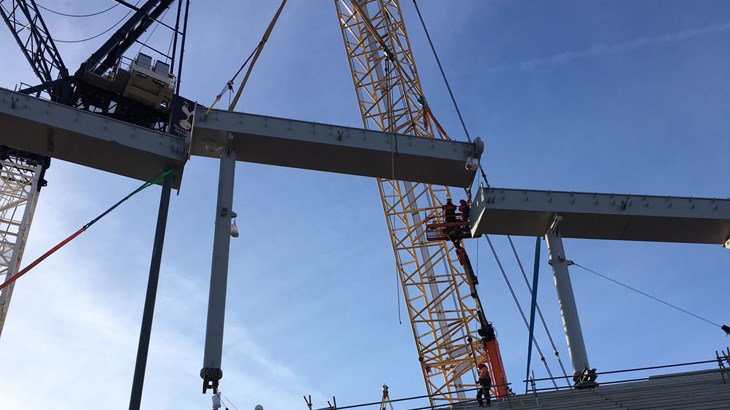 A key milestone on the New Spurs Stadium has been achieved this month, with the roof structure being raised into place and the decorative tiling on the facade getting underway, all while the Club awaits the council’s decision on their application to increase capacity at the venue up to 62,062.

The compression ring sits at the back of the four stands and creates an elliptically-shaped ring, which will hold the cable net roof structure. After the cables have been lifted into position, the roof will be covered with 287 glass roof sections and 810 cassettes. 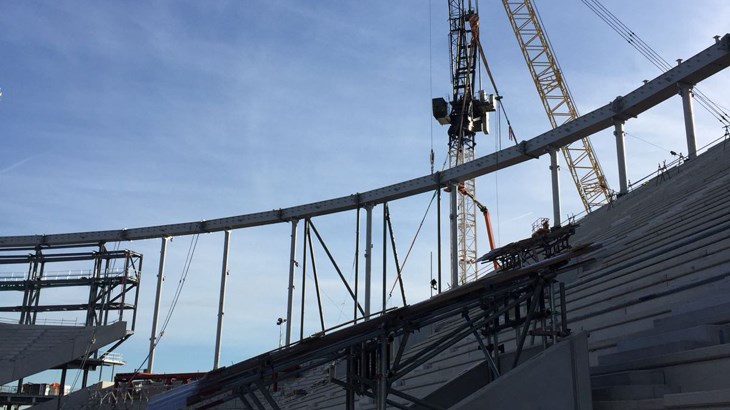 These cables will all be tightened at the same time by strand jacks (lifting jacks attached to the cables) until the roof is sufficiently tensioned to structurally support itself. The whole process will take a number of weeks and is dependent on weather conditions. Once in place, the roof will form the highest point of Tottenham Hotspur (‘Spurs’) new home.

The compression ring has been completed at the New Spurs Stadium 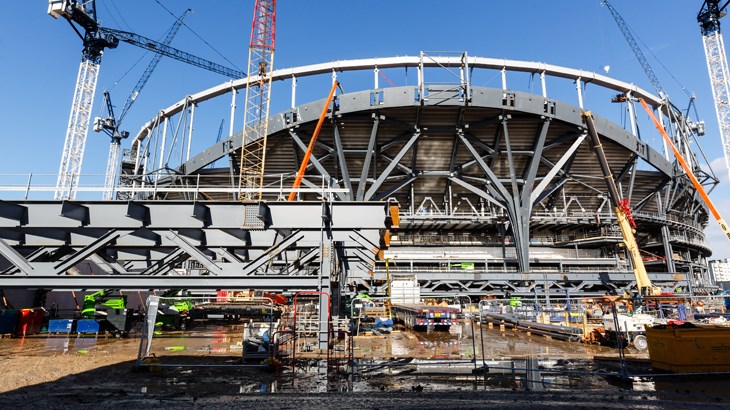 Looking across at the new stadium from the south-east

Decorative tiling gets underway on the stadium facade

Installation of the decorative tiling on the outside of the New Spurs Stadium has also commenced, which, once completed, will feature some of the most well-known words and phrases that represent the famous club.

The six different phrases, all created in the Club’s bespoke font, will adorn the outside of the stadium on each of its six cores, paying homage to Spurs’ heritage and core values. The tiles have been specially rendered in the Club’s renowned dark blue and will form a key part of the fabric of the building.

The words ‘TOTTENHAM HOTSPUR’ and ‘ESTABLISHED 1882’ will be spelt out either side of the West Atrium, with the iconic club badge also adorning this elevation of the stadium.

Tiled either side on the opposite East Atrium will be an excerpt from the famous quote from the club’s 1961 double-winning captain, Danny Blanchflower, ‘The GAME IS ABOUT GLORY’ and ‘LONDON N17’, representing Spurs home city and postcode. In fact, the D in ‘LONDON’ is already visible – as the photograph below shows.

The North West corner will feature the club’s motto ‘TO DARE IS TO DO’ with the original Latin form ‘AUDERE EST FACERE’ appearing on the North East corner. The letters for these will be cast in concrete with a dark blue tiled background.

Although the original planning approved a seating capacity of just over 61,500, the Club applied to Haringey Council last month to increase that to 62,062. A decision on which is imminent.