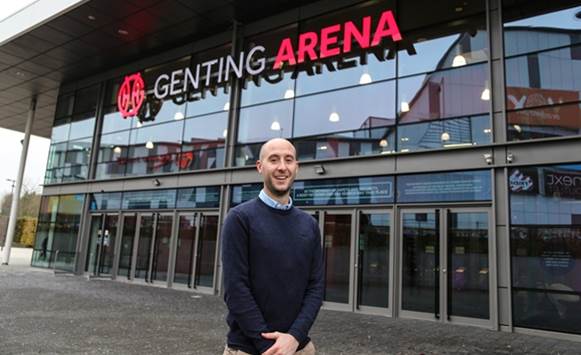 Ben Sharman has been appointed as Venue Sales Manager at Birmingham’s NEC Group Arenas to further strengthen the sales team.

Working across both venues (Genting Arena and Arena Birmingham), Sharman will be working with the existing client base and nurturing many of the relationships the Arenas’ sales team has built with promoters and event organisers over the years. He’ll also be looking at attracting new business and bringing new event concepts to market.
Sharman joins with a background in commercial marketing, having worked on naming rights agreements for both venues as Sponsorship Manager for the NEC Group, in addition to previous positions such as Sponsorship Executive at Aston Villa Football Club (AVFC) and Commercial Assistant at British Athletics.
Sharman said:

This is a fantastic opportunity to take what I’ve learnt in my three years with the Group, and support the arena venue sales team to drive sales and deliver the best service possible. I’m eager to join such an established and unique team that can offer the full package – not just event space, but a wealth of additional services through other NEC Group brands including ticket sales via The Ticket Factory, Amplify hospitality and in-house marketing support.

Ben will be a great addition to the team. He’s already had exposure to the arenas industry in his previous Group role, and I have no doubt that his enthusiasm and ambition will shine through in the quality of business he will deliver to our venues.
I’m delighted we are expanding our team to support the successful management of two arena venues in one city. Our ability to do this relies on the strength of Birmingham’s market, with demand from both ticket buyers and promoters at an all-time high. As a team, we strive to exceed the expectations of our Arenas’ clientele, so we hope this positive business trend continues throughout 2018 and beyond.

NB: We will be bringing you an insightful interview with Ben Sharman in the near future, but in the meantime, make sure to read the recently conducted interview with the Guy Dunstan, NEC Arena Group’s General Manager. Simply click here.