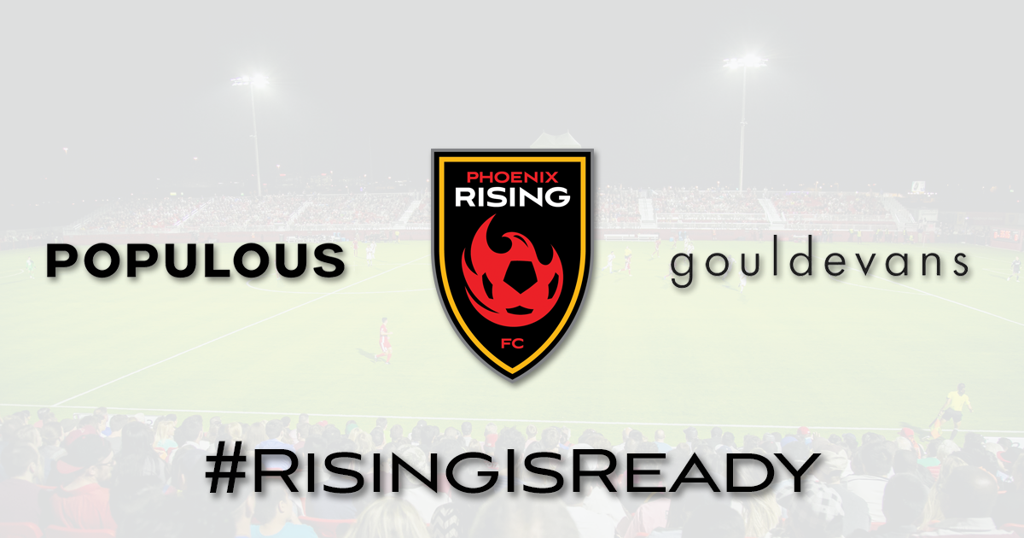 The chosen design duo are Populous, a leading architectural firm that has designed seven MLS stadiums, and Gould Evans, a Phoenix-based multi-disciplinary design firm with expertise in environmentally responsive structures. The pair will be collaborating to create the newest professional sports stadium in the greater Phoenix area.

In its continuing quest to receive an MLS expansion club, Phoenix Rising FC sought proposals from leading architect and design firms across the country. They received seven exceptional proposals, and in collaboration with Goldman Sachs, the finalists were narrowed down to three top-notch firms followed by further analysis conducted by a variety of respected consultants.

It was important for us to make sure that the selected firm really understood our needs. We need to build a stadium that will be comfortable for both the fans and players, so it was crucial that the winning architectural design team understood the challenges and opportunities associated with the Sonoran Desert. We conducted months of analysis with multiple organizations to ensure we were picking the ideal companies for the job and we could not be more excited or confident in this partnership. This announcement represents another milestone in Phoenix Rising’s ‘Rising is Ready for MLS’ campaign.

Arup, an independent firm of designers, planners, engineers, consultants and technical specialists conducted extensive analysis of the design plans of all three finalist firms. Arup helps clients solve complex challenges such as harsh climates and has conducted a variety of studies on the topic. Additionally, local award-winning construction experts, Mortenson Construction, further assessed the building plans to determine the best possible proposed design and construction, based on their vast knowledge of complex construction projects.

With fifteen offices across four continents, Populous is a global architecture and design firm that designs the places where people love to be together, such as Yankee Stadium, the London Olympics and the Super Bowl. Over the last 35 years, the practice has designed more than 70 soccer stadiums and 14 national stadiums around the globe including Wembley National Stadium and Tottenham Hotspur’s White Hart Lane stadium in London, Orlando City SC Downtown Stadium, BBVA Compass Stadium in Houston and Children’s Mercy Park in Kansas City.

Phoenix Rising fans deserve a state-of-the-art MLS stadium, and we couldn’t be more excited to create that environment. We will bring the best of our global soccer design experience to this wonderfully exciting project.

Gould Evans, based in Phoenix, with four additional offices around the country, focuses on regionally appropriate designs with a blend of proven passive and technical solutions to reduce temperatures before and during games. Their approach to the new Phoenix Rising stadium will include providing tactical shade, while maximizing ventilation and water as a vehicle to cooling.

Part of designing the optimal desert soccer experience includes employing heat mitigation tactics through a carefully choreographed strategy. As Phoenicians, we are calibrated to living with the sun, and we know what is needed to make comfortable outdoor places.

Together, Populous and Gould Evans are ready to create a world-class, 365-days-a-year venue that serves fans and the broader community as a full-scale entertainment destination. The two companies are starting their design work immediately on behalf of Phoenix Rising F, with initial design renderings to be launched in the next couple of weeks.

Plans for the new, privately-financed stadium are on track, pending an MLS expansion award to Phoenix, with the facility ready to open as soon as the 2021 MLS season.