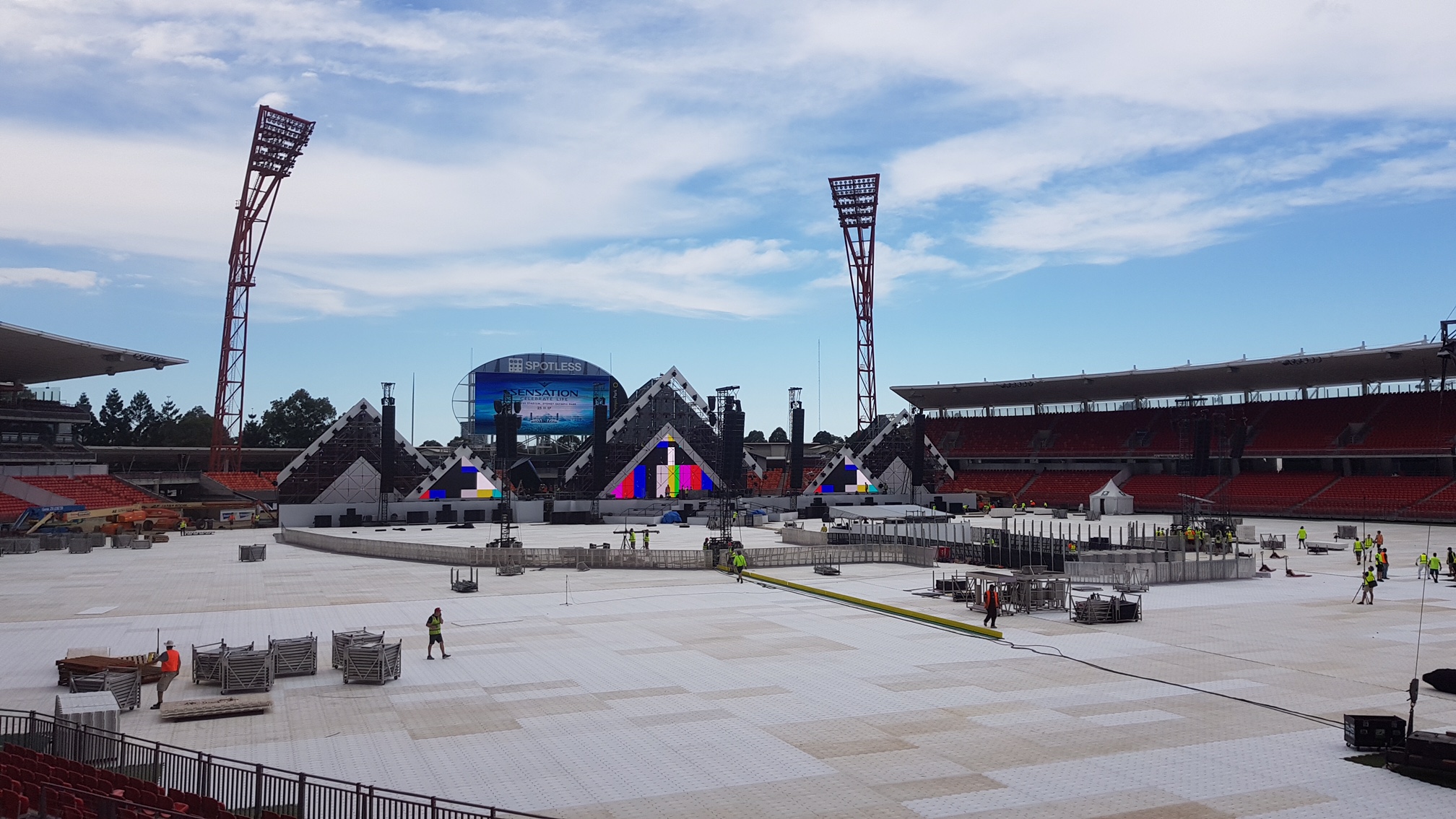 Mojo Barriers Australia recently undertook one of the country’s largest stadium field cover installations, with over 15,000m₂ being installed for ‘Sensation’, which took place at Spotless Stadium, Sydney Showground, November 2017.

Sensation, the biggest open-air festival in Australia this year, was a great success, and protecting the valuable sports surface was of critical importance as Spotless Stadium is the home of Sydney’s professional cricket team Sydney Thunder and the Greater Western Sydney (GWS) Giants, part of the Australian Football League.

Mojo installed a complete Supatrac system to ensure the best possible pitch protection. It took 34 truck movements to freight the equipment in and out of the stadium and over 850 man hours to install and remove.

The Mojo team installed over 15,000m₂ of 100% white Supatrac, along with over 500m of aluminium Mojo Barriers in a ‘D’ configuration.

Since launching as a supplier of Supatrac in January of this year, Mojo Barriers is now able to provide both barrier and stadium floor covering as a combined offering. To further protect the stadium pitch at Sydney Showground, the team installed a layer of Enkamat under the flooring to provide additional protection at the areas with the highest footfall and crowd density.

As well as being on-site during the event, the Mojo team managed the daily installation and removal of the aluminium ground protection products during the stage build, and worked closely with the festival organisers and stadium groundskeeper to ensure optimum crowd barrier configurations and pitch protection.

It was great to be able to showcase our logistical capabilities installing Supatrac and barrier as a combined service, and to be instrumental in one of the largest stadium field covers in Australia makes us particularly proud. Pitch covers are usually a combination of a variety of products; however we supplied 100% white Supatrac to Sensation to ensure the same high quality product throughout the entire stadium.

Not only did our team need to ensure the products were installed to the highest standard for the biggest festival Australia has seen in three years, but due to it being hosted in such a busy stadium, the condition of the turf post-Sensation was critical with the upcoming sporting schedule.

The Supatrac product is the way of the future for stadiums, the product doesn’t leave indentations on the turf and a sporting event can be held the next day. Supatrac is an efficient product to install and remove, with 15,000m2 installed in under eight hours there was minimum impact to production load-in – and it was even quicker on the load out. Coupling the supply of flooring and stage barrier products with Mojo delivered further efficiencies and made for a smooth and flexible operation.

The aluminium and Enkamat combination was also highly effective. We managed to load in over 50 tonnes of steel for the stage and production build with four 135 foot boom lifts and two 60 tonne cranes operating for five days. With heavy production on the aluminium and 30,000 patrons on the Supatrac it is remarkable that none of the turf required replacing after the event – this is a great result for the Sydney Showground. Supatrac is the benchmark for stadium shows to minimise impact on the pitch.