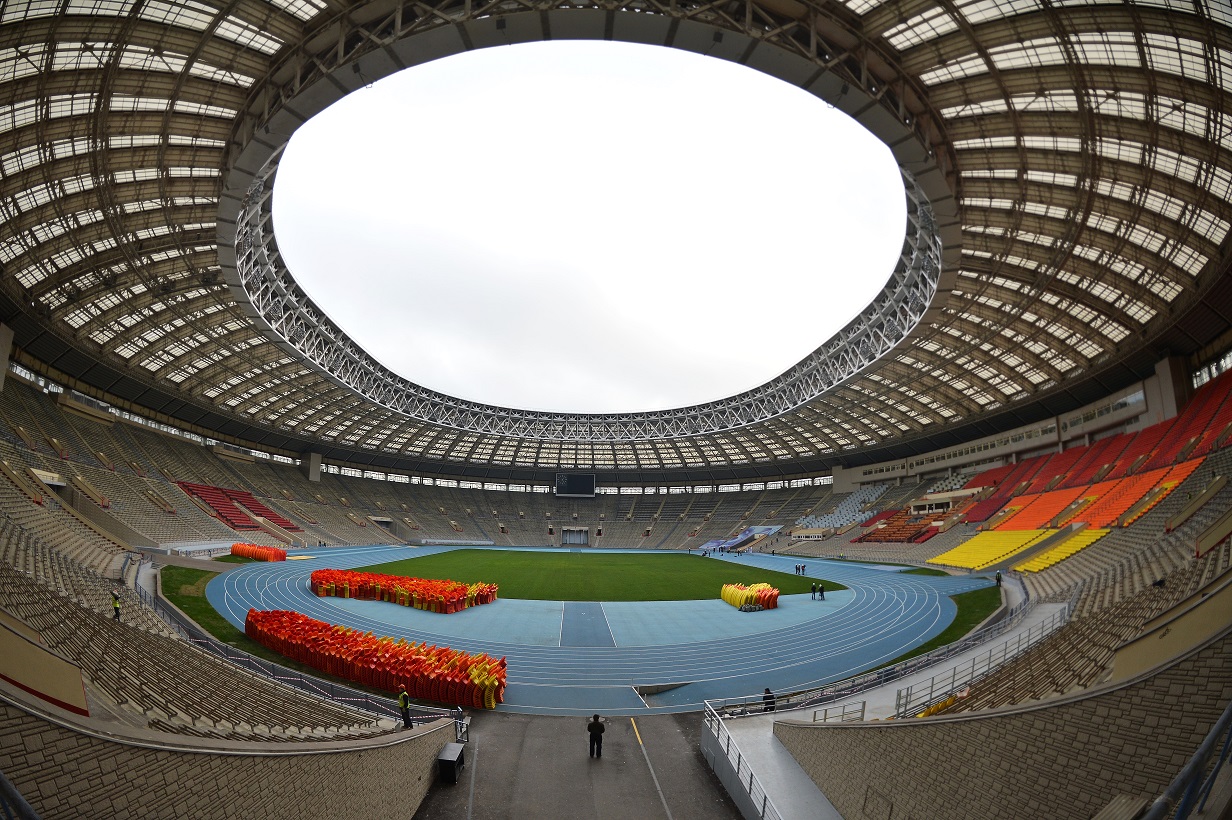 As the prestigious Host Venue for both the Opening and Final match of the 2018 FIFA World Cup Russia™ it was vital for the Operators to not only achieve the highest standards for their facility and hybrid turf playing surface, but to also meet the stringent requirements demanded for legacy/sustainability. This is where world-leading turf protection company, Terraplas, stepped into action.

As you can imagine, the due diligence the Contractors and Operators of the Luzhniki Stadium had to undertake was significant – there was no way they could afford to risk any of the necessary elements. Accordingly, considerable evaluation was undertaken of the turf protection products available on the market. This was followed by discussions with the various manufacturers, testing in various scenarios, and cost negotiations.

The quality of Terraplas’ products, together with the Company’s unbeatable experience and status in the turf protection market worldwide, were totally dominant. So, in spite of not being the cheapest option, the decision was made to purchase a combination of Terraplas products, as follows:

Having had the system delivered, the next ‘waypoint’ was for Luzhniki Stadium to use their system for the first time.

To mark its “Grand Re-Opening” Stadium Management wanted to host a high profile event for “Unity Day” – including political orators, musicians and other presentations. FIFA were very concerned about this, as a ‘friendly’ International soccer match between Russia and Argentina was planned for just 7 days later. FIFA were not confident the pitch would be up to standard following the rigours of the Unity Day celebrations.

In-depth talks took place between Luzhniki Stadium Management, Terraplas’ Russian Distributor, Raita Sport, Robert Else, Chairman & Founder of Terraplas, and Terraplas’ Senior Supervisor, Steve Tingley – who was Head Groundsman at Wembley Stadium for 10 years and has worked with Terraplas around the world for the last 28 – with all parties in agreement that they would be able to ensure the pitch was up to standard for the international friendly, meaning the show could go on!

As is the case for all customers, Terraplas sent Steve Tingley out to Moscow to supervise the first fitting, advise on pitch preparations, subsequent maintenance and provide on-site training to the stadium’s grounds team and other local staff. 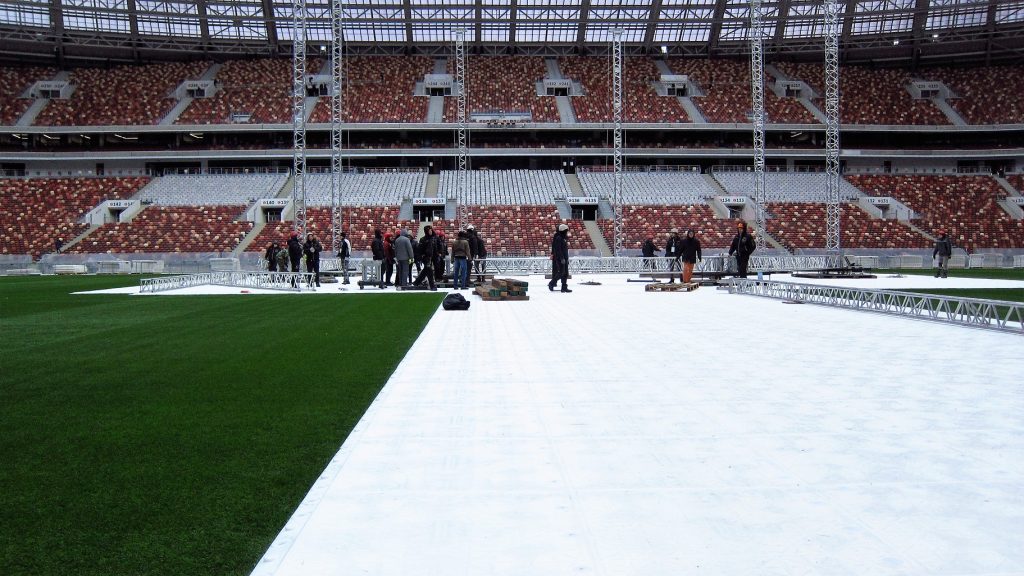 Wednesday evening, November 1, 2017: Fit terratrak plus® to allow access for the production trucks and crew to construct the stage in the centre of the pitch 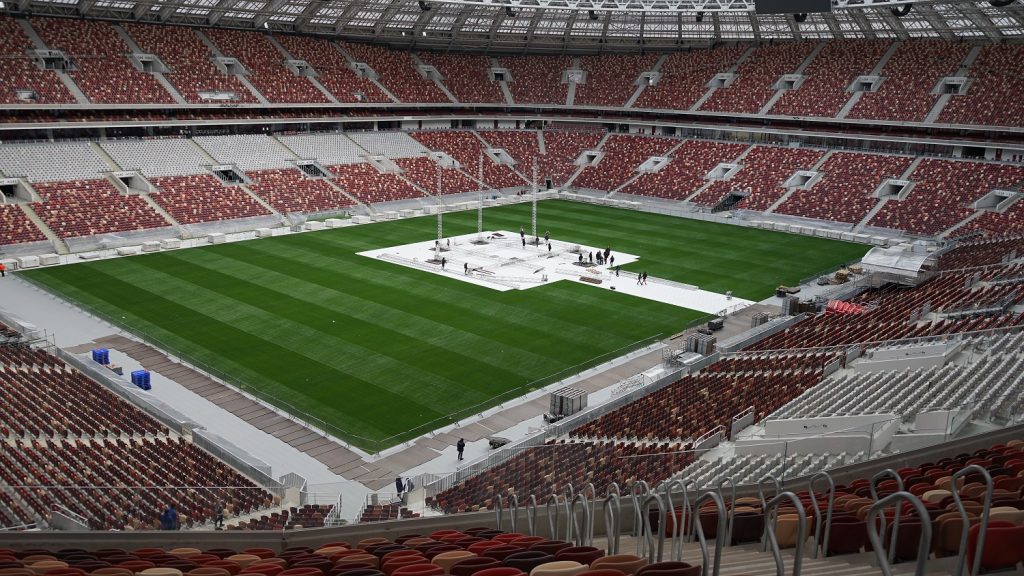 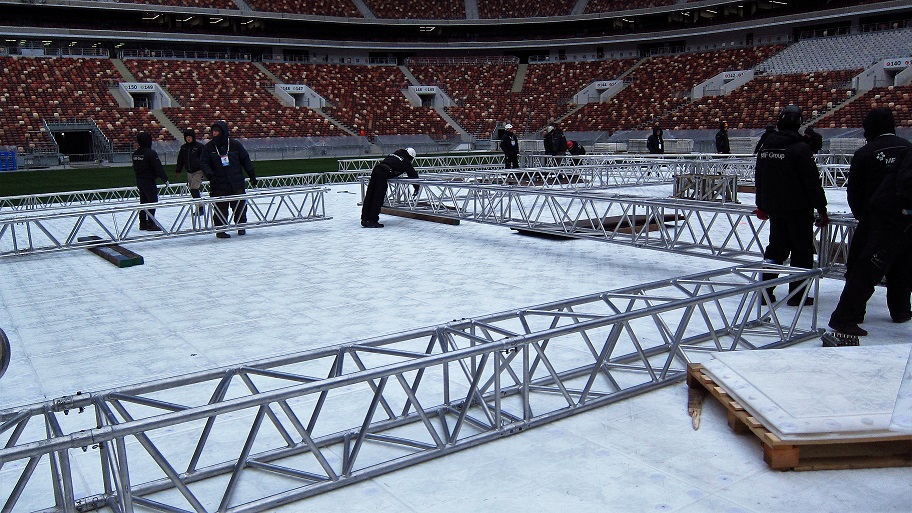 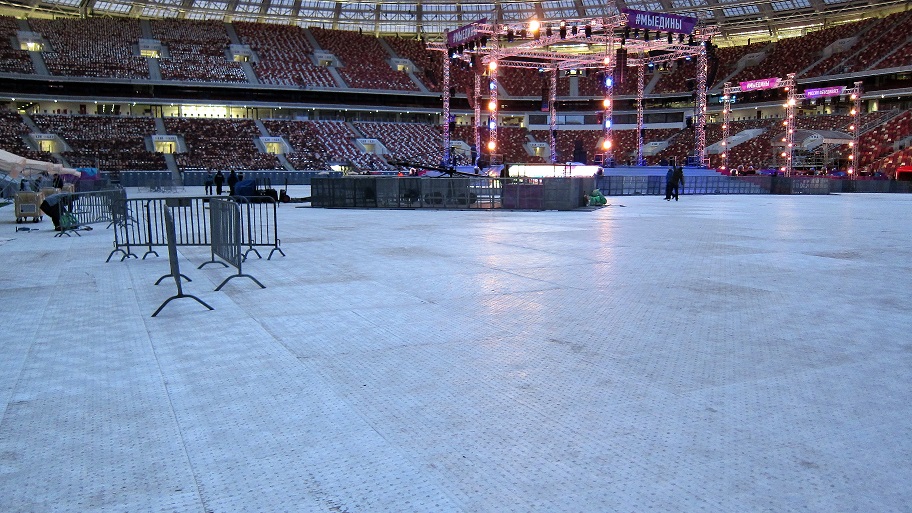 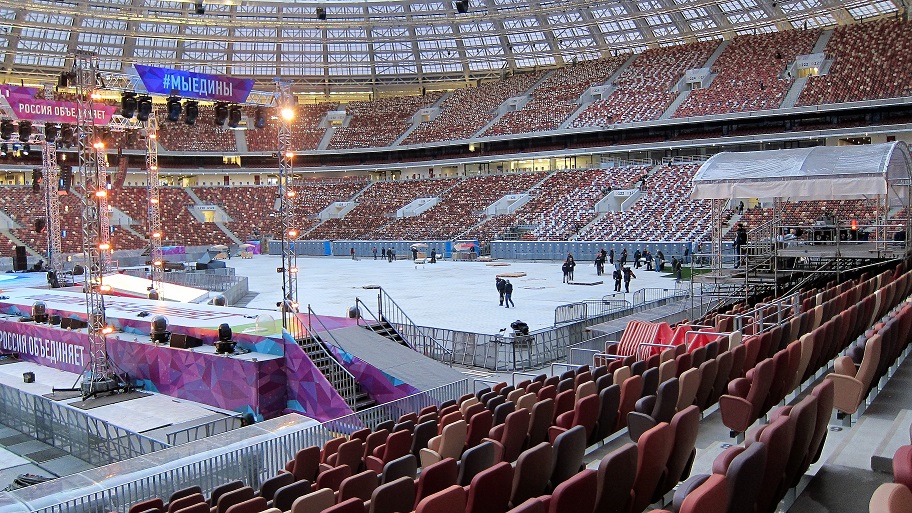 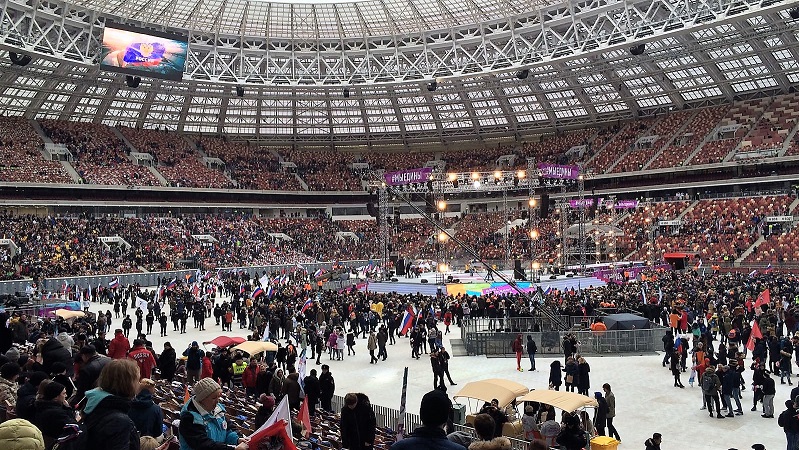 Saturday November 4, 2017: Unity Day celebrations underway, with over 100,000 patrons, around 20,000 of whom were enjoying the celebrations on the pitch, with a further 40,000 watching proceedings outside on the big screens 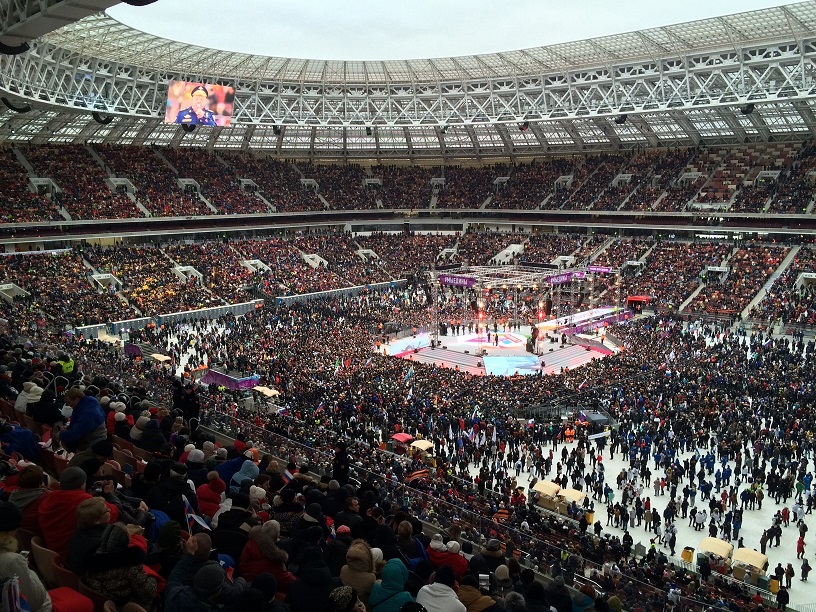 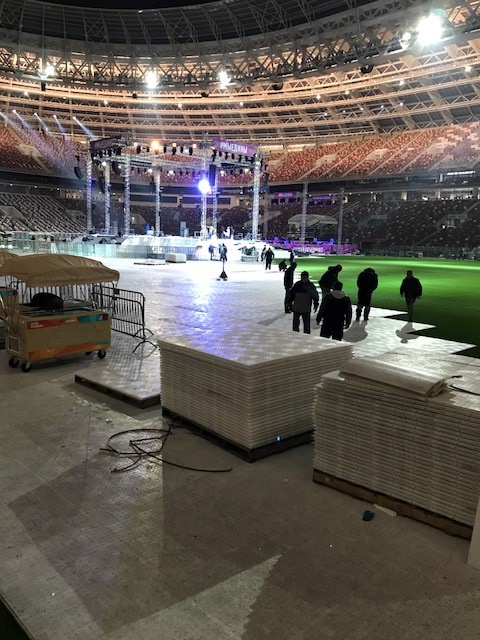 Saturday 4, late evening/early hours Sunday 5 November: Lifting of the terratile® and breakdown of the stage commenced immediately after the Unity Day event finished. By midday on Sunday the pitch was completely clear

The terratile® was lifted first, while the stage and equipment was removed. Only the indentations from the feet and underside of the terratile® were visible, as you can see from the picture below. 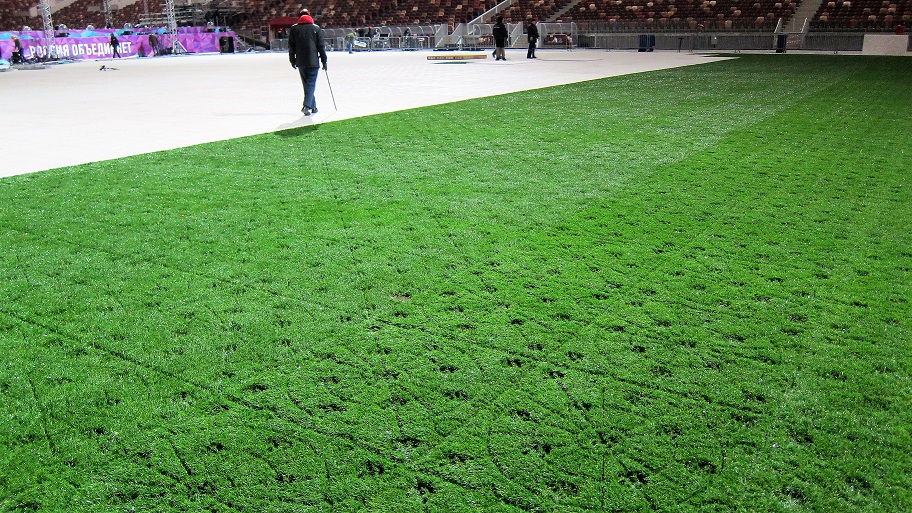 By the time the terratrak plus® was lifted, it had been in place for four days and, as you can see from the photograph below, there was no damage or discolouration to any of the hybrid pitch, which boasts 95% natural turf together with 5% specially-designed PE yarn.

The 2018 World Cup will be the first ever to have a SISGrass natural turf reinforced pitch with SISAir technology that actively manages soil moisture and removes excess water from the soil via a network of pipes under the pitch that forces air movement through the soil beneath the playing surface, both delivered by SIS Pitches. 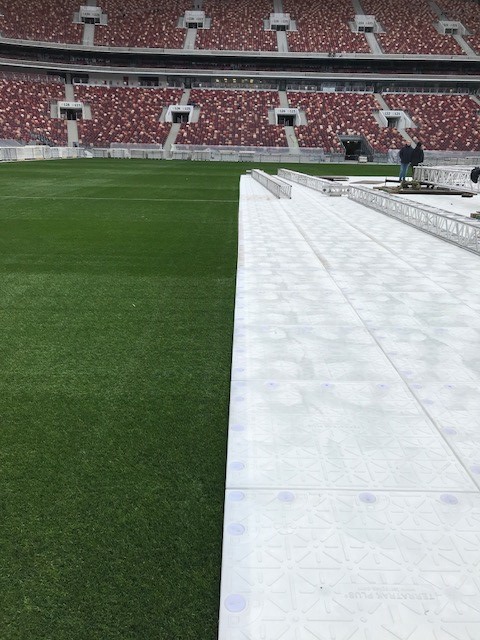 After lifting the cover, and on the advice of Terraplas, the pitch was allowed to rest for 12 hours prior to cutting and normal maintenance. As can be seen from the photographs below, by November 6, everything was on target for the International soccer match, Russia versus Argentina, which was held on November 11, and ended in a 0-1 loss for the home nation’s team. 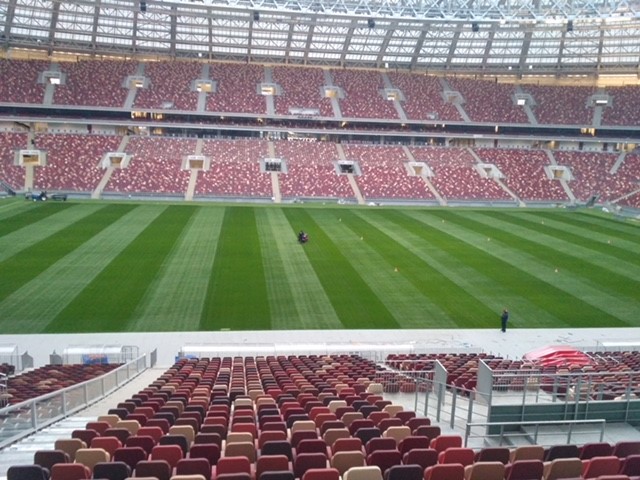 By November 6, everything was on target for the International soccer match, Russia versus Argentina, which was held on November 11 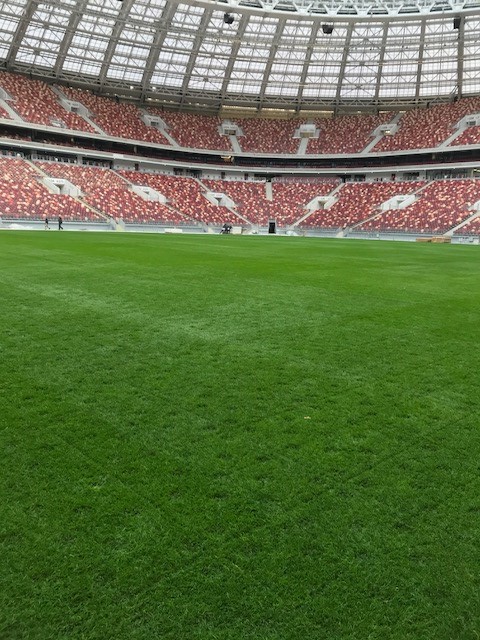 For further information on Terraplas and their industry-leading products, check out their listing in the SVB Directory listing by simply clicking here.