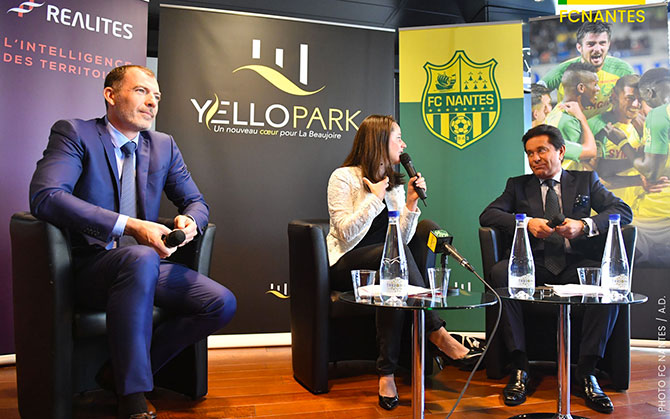 At a press conference held last month, Mayor of Nantes, Johanna Rolland, together with FC Nantes President, Waldemar Kita, and President of Realites (the real estate developer), Yoann Joubert, announced the commencement of works for the construction of a brand new stadium for the ‘Canaries’, which will be a comprehensive and innovative urban project.

Ligue 1 club FC Nantes boasts a long and illustrious history, and the eighth champion of France will soon be able to boast a new modern and functional stadium to reflect this.

The new stadium, which will be known as ‘YelloPark’, will be built on the site of the club’s current home, Stade de la Beaujoire, and initial plans have completion slated for the summer of 2022.

Stade de la Beaujoire was inaugurated in 1984, ahead of its hosting duties for the UEFA European Championships. It is hoped that a similar agreement can be reached for the new stadium to host soccer matches during the 2024 Summer Olympic & Paralympic Games, which were awarded to the French capital only last month.

We do not have any stadiums that meet UEFA standards in western France. We want to do everything so that this stadium is the best in France and one of the best in Europe. It is my duty to equip this large club with a stadium and complex that meets its requirements and ambitions.

Backed by an ambitious urban project – including a well-being sports complex, housing, local shops, a market, a car park and even a school group – the construction of the new stadium – working in unison with the project’s supporters, partners and residents of the local neighbourhood – will begin in the coming weeks.

Although it is too early to confirm the budget, the envelope envisaged amounts to €200m, which will be financed entirely from private funds by YelloPark, as Mayor Rolland confirmed:

Not a penny of Nantes’s tax money will be used in this matter. It’s not for public money to finance these projects.

With delivery scheduled for the summer of 2022, the new stadium marks the anchoring of President Kita in the history of the club, not least as the new enclosure is also set to secure hosting duties during the 2024 Olympics.