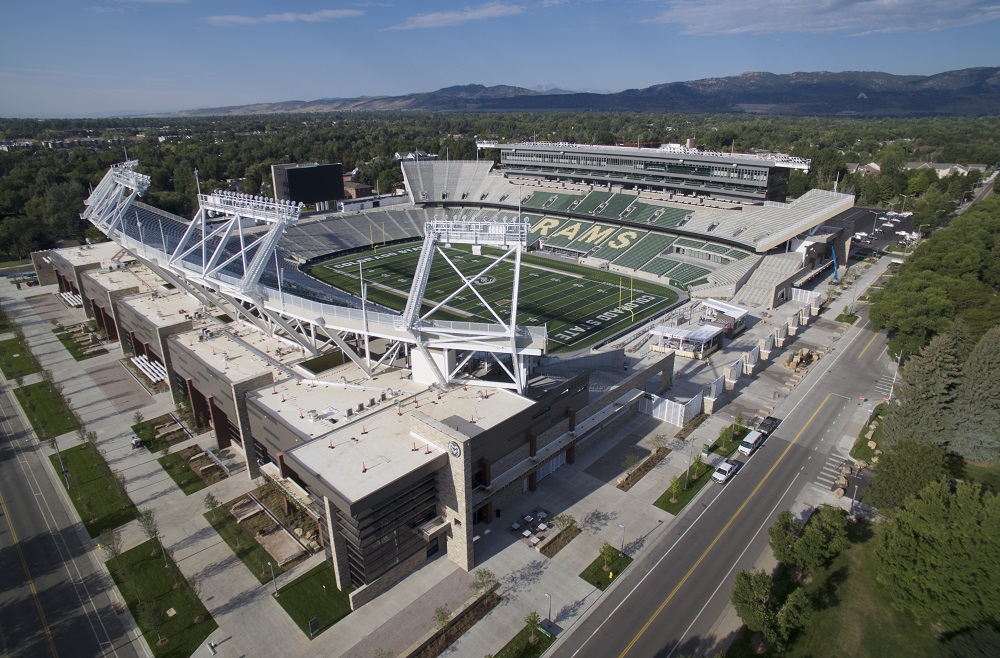 The new US$220m multi-purpose stadium at Colorado State University opened its doors this past weekend, marking what is so much more than just a new stadium for football fans; being a building that captures the passion and trajectory of campus, becoming a place for students, fans and the community to learn, socialise and celebrate.

When the CSU Rams met PAC-12 opponent Oregon State for the season home opener on August 26 at CSU’s new stadium, it marked the first time in almost 50 years that intercollegiate football had been played on the Fort Collins campus. Colorado State Stadium’s inaugural game also kicked off the 2017 NCAA football season.

Designed to house football and alumni operations, the stadium will be active year round, serving as a cornerstone for campus and community. Unique features include a wraparound bar and terrace just inside the main entrance, and a sideline field club with a glass wall for views of the player tunnel, each first-of their-kind spaces for college football. It is also the first mid-century modern football stadium in the world.

The new on-campus stadium has been designed by world-renowned sports architecture practice, Populous, as an open-air entertainment, academic and training destination. The design embraces the natural beauty, topography and visual connections to the Rocky Mountains and will bring football back to the CSU campus.

The 41,000-capacity stadium’s design is authentic to the state and region, with a sweeping plaza on the north side providing space for elevating existing traditions and enjoying the views. The material palette from the campus is pulled from the earth, reflective of the natural Fort Collins surroundings. It also ensures functionality for both game day and non-game day usage.

An 80,000sqft Alumni and Academic Centre, which cost an additional US$18.5m, has also been integrated into the design to bring students and faculty into the building year-round, and includes student advising services. The stadium also serves as the all-inclusive home of football operations with training and coaches offices. For non-game day events, the stadium clubs provide flexible usage and banquet spaces offer alumni space to tailgate.

Bringing a variety of seating offerings for each and every fan including the Orthopaedic & Spine Center of the Rockies Field Club located at field level behind the Rams’ bench and next to the player’s tunnel for one of a-kind views. Another unique club, the New Belgium Porch, is a craft beer space which will remain open on non-event days.

As an opportunity to bring football back to campus for the first time in decades, the stadium accentuates the pageantry of on-campus football by providing space, like the North Plaza, that will become a destination outdoor terrace that functions year-round to connect campus to the site. The stadium’s mid-century modern architecture and convenient location next to student housing make it a physically and aesthetically connected beacon of activity at the University. 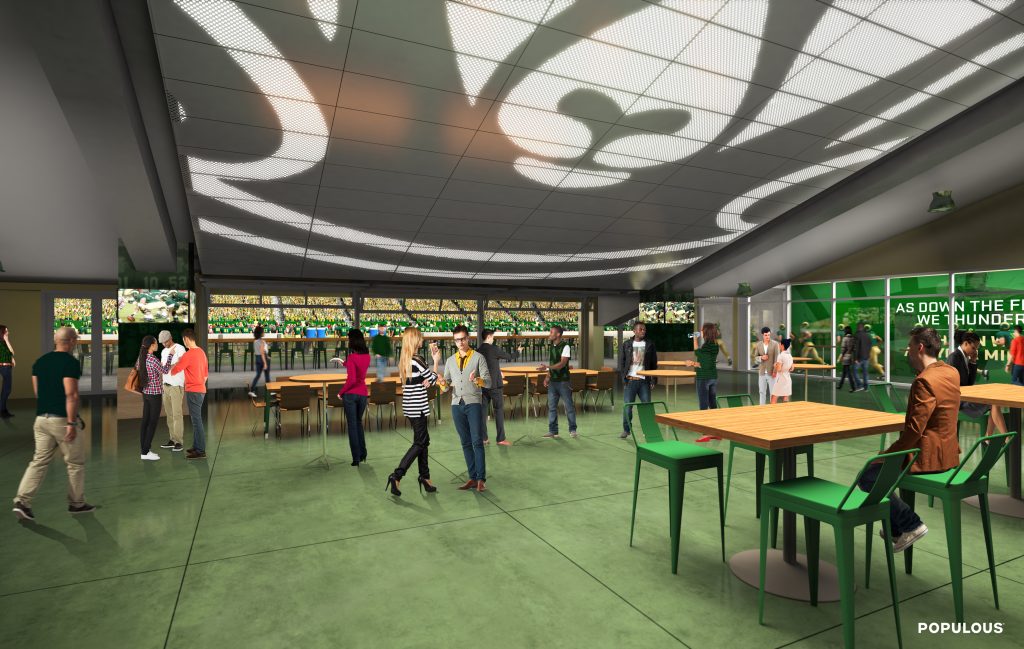 The Sideline Field Club opens to the playing field via a large patio space where fans can view the action from the sideline. This space, unlike anything in collegiate athletics, provides exclusive views of the team’s entrance and exit from the field

The Sideline Field Club opens to the action on the field via a large patio space. Unlike anything in collegiate athletics, this gathering space offers views of the team’s entrance and exit from the field from behind a glass wall.

In addition, a partnership with New Belgium brewery will create a 1,200-person hospitality area. The New Belgium Porch on the north side of the building welcomes fans to the site and provides a space for the community to gather year-round. This north end zone space features two bars complete with local and craft beers and includes standing room only access.

The stadium also features state-of-the-art video and sound systems, including an 84ft x 50.5ft HD videoboard along with approximately 1,270 linear feet of ribbon board, together with LED field lighting and leading-edge DAS and Wi-Fi. Five retail locations, totalling more than 4,500sqft, can also be found within the venue. 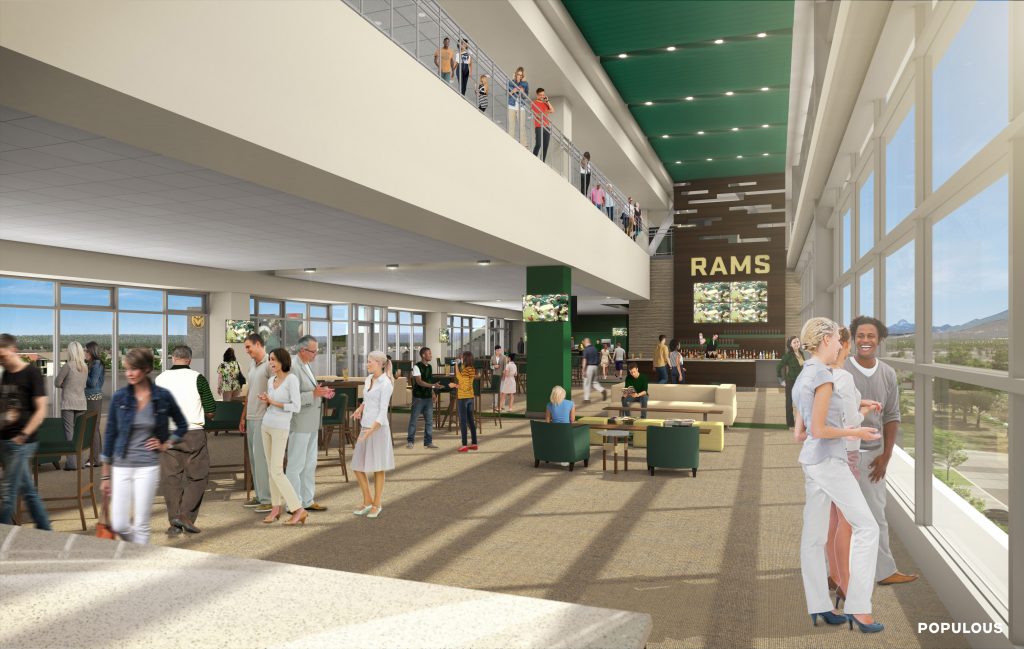 The Stadium Club offers 11,600sqft of space, with views of the front range, supported by 884 club seats

Following Colorado State’s inaugural sold-out game, The Aspire Group’s sales staff in the on-campus Fan Relationship Management Center (FRMC) is working hard to sell out the rest of the games for the 2017 season.

Before Aspire’s arrival to Fort Collins in 2015, CSU football had 7,034 season ticket holders for the 2014 season. With the excitement of the new stadium and Aspire’s best-in-industry sales training and customer service, CSU’s season ticket holder base is now well over 15,000 – the highest in school history. Over 5,750 of the season tickets sold are new for the 2017 season, a 101% increase from the 2016 season.

The Aspire Group has done a remarkable job on behalf of CSU Athletics. They have worked in a fully integrated manner with our external units to help us surpass key fan engagement metrics. The team put their shoulders to the wheel and made our aggressive goals a reality.