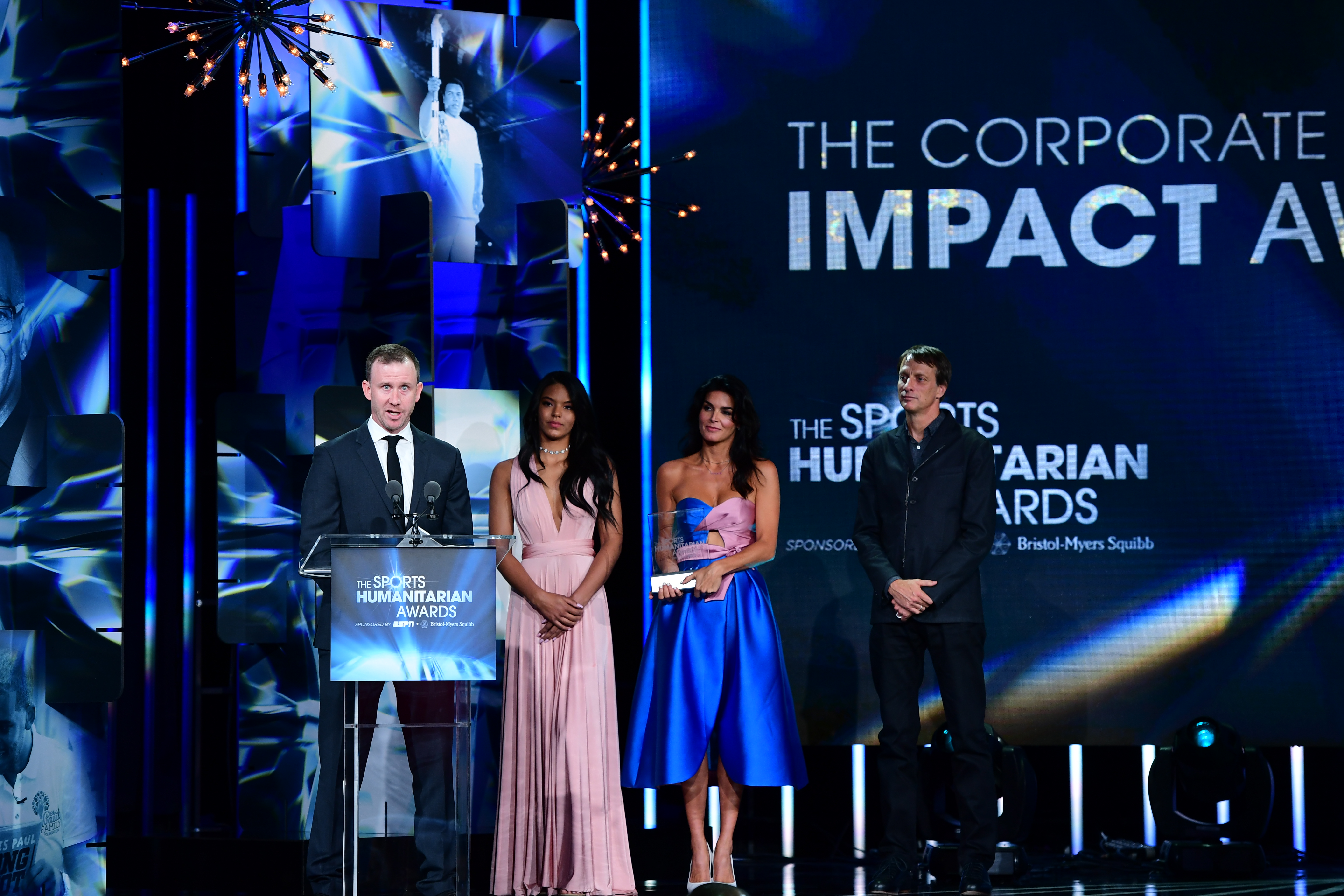 Hosted by Laila Ali and Mike Greenberg, the July 11 event gathered leagues, teams, individuals and members of the sporting community in Los Angeles at L.A. LIVE’s The Novo to celebrate those who have used the power of sports to make a positive impact on society.

More than US$1.1m was raised through the Sports Humanitarian Awards, which will benefit the Stuart Scott Memorial Cancer Research Fund at The V Foundation. Additionally, ESPN will grant an additional US$1m to the charities of the nominees and winners. In total, more than US$2m will be distributed to the community as a result of the initiative.

The very best of what sports can do was on full display at the third annual Sports Humanitarian Awards. The collective devotion demonstrated by these individuals, teams, leagues and companies to use their platforms to improve society illustrates an important link to the trailblazing spirit and incomparable legacy of Muhammad Ali.

Mark Giordano, team captain of the NHL Calgary Flames, was honoured with the newly renamed Muhammad Ali Sports Humanitarian Award, recognised as an athlete who has continuously demonstrated integrity and bravery and has created a positive impact on their community through sports. His Team Giordano program provides resources to 1,900 students, promoting physical fitness, academics and positive behaviors. And the program is working—with one school reporting that 88% of students are reading at grade level thanks to the literacy resources provided courtesy of Team Giordano. Additionally, he stands behind other important community causes, including stamping out discrimination based on sexual orientation and support of mental health awareness. Giordano will be able to direct a $100,000 grant from ESPN to the qualified charity related to the award-winning humanitarian efforts.

The Sports Humanitarian Team of the Year Award went to the San Francisco 49ers. The team is at the forefront of two innovative and highly impactful programs aimed at using football to make lasting changes in the Bay Area. First, the 49ers STEM Leadership Institute, which is a six-year curriculum that begins in 7th grade and continues through high school and seeks to prepare students with high academic potential in STEM — over 40,000 hours of education were offered last school year. Second is the 49ers STEAM Education Program, which has provided 150,000 K-8 students informal learning experiences using the principles of science, technology, engineering, art, and mathematics. The San Francisco 49ers will be able to direct a $100,000 grant from ESPN to the qualified charity related to the award-winning humanitarian efforts.

The USTA was honoured with the League Humanitarian Leadership Award for driving social impact by providing more than 300,000 under-resourced children with 165,000 hours of critical programming in 2016. The USTA Foundation supports the National Junior Tennis & Learning network of more than 500 chapters that offers free or low-cost after school tennis as a way to engage underserved youth to stay in school and build their potential on and off the court. Between 80 and 90% percent of youth who participate in USTAF programs report improvements in learning core educational components, self-confidence, decision-making and physical activity. Additionally, over 90% of the seniors in USTAF programs graduate from high school and 90% of their scholarship recipients attend college for four years. The USTA will be able to direct a $100,000 grant from ESPN to the qualified charity related to the award-winning humanitarian efforts.

The winner of the Corporate Community Impact Award was DICK’S Sporting Goods, which in conjunction with The DICK’S Sporting Goods Foundation launched Sports Matter to help save youth sports by highlighting the benefits of youth sports through documentaries and short films. Additionally, they support over 200 Team USA Olympic and Paralympic hopefuls through flexible employment and sponsorship agreements. To date they have pledged over US$50m to support youth athletics across the country. DICK’S Sporting Goods will be able to direct a $100,000 grant from ESPN to the qualified charity related to the award-winning humanitarian efforts. The other nominees for the Corporate Community Impact Award were Chevron, HOK’s Sports + Recreation + Entertainment practice and Under Armour.

HOK was the first stadium design firm to be nominated for a Humanitarian of the Year award, which is a huge step for recognising the building type’s impact on communities and sustainability. The practice has designed more than US$4bn in sustainable stadiums, arenas and training facilities, have contributed more than 5,700 hours of volunteer work and have led the sports industry in sustainable design through ‘firsts’ including the first professional stadium to pursue LEED Platinum (Mercedes-Benz Stadium), the first LEED Silver ballpark (Nationals Park) and the only salmon-safe certified stadium and the single largest LEED certified facility by seat count (Husky Stadium). Across their stadiums, HOK has saved energy use by an average of 18.75%; reduced water consumption by 38.4%; diverted an average of 80% of waste from landfills; and designed spaces that have produced more than 24 tons of fresh fruit and vegetables for their communities.

Three Stuart Scott ENSPIRE Awards, which recognise individuals who have taken risk and used an innovative approach to helping the disadvantaged through the power of sports, were presented to WWE Chief Brand Officer, Stephanie McMahon, the Orlando City Soccer Club and the Ross Initiative in Sports for Equality. McMahon helps raise funds and awareness for partners including Make-A-Wish, Special Olympics, Susan G. Komen, Boys & Girls Clubs of America, and Be a STAR. Her innovative approach to giving back is highlighted through her passion for pediatric cancer research through Connor’s Cure, a fund she set up in honour of a young WWE fan, which has raised more than US$1m and assisted more than 100 families around the world. The Orlando City Soccer Club united together after the tragic Orlando shooting on June 12, 2016, to help aid in inclusion and respect. Though it came with risk, the club and its dedicated supporters crafted a bold, inspired and innovative response, and have helped raise $500,000 through the OneOrlando Fund. The Ross Initiative in Sports for Equality (RISE) was established by Miami Dolphins owner Stephen Ross to harness the unifying power of sports to improve race relations and drive social progress. Since its founding, RISE programs have reached more than 30,000 students, coaches and athletic staff.

We share a common goal with organizations like the Stuart Scott Memorial Cancer Fund and The V Foundation – to achieve victory over cancer. While we still have a long way to go to fight this disease and address inequities in healthcare, we are energized by a deep commitment to patients and inspired to do more. Congratulations to this year’s Sports Humanitarian Award recipients, who remind us of what can come from perseverance and generosity of spirit.

Below is a complete list of award winners from the event’s three-year history.

About ESPN Corporate Citizenship
ESPN believes that, at its very best, sports uplifts the human spirit. Its corporate citizenship programs use the power of sport to positively address society’s needs through strategic community investments, cause marketing programs, collaboration with sports organizations and employee volunteerism, while also utilizing its diverse media assets. For more information go to www.espn.com/citizenship.

About the V Foundation for Cancer Research
The V Foundation for Cancer Research is dedicated to declaring victory over cancer. It was founded in 1993 by ESPN and the late Jim Valvano, legendary North Carolina State Basketball coach and ESPN commentator. Since 1993, the Foundation has funded more than $170 million in cancer research grants nationwide. It awards 100 percent of all direct cash donations to cancer research and related programs. Due to generous donors, the Foundation has an endowment that covers administrative expenses. Not a Moment to Lose, its boldest fundraising campaign to date, aims to raise $200 million for cancer research by 2020 to help transform the prevention, detection and treatment of cancer. The Foundation awards peer-reviewed grants through a competitive awards process vetted by a world-renowned Scientific Advisory Committee. For more information on the V Foundation, please visit www.jimmyv.org.

About Muhammad Ali
Muhammad Ali is one of the most recognizable and influential sports figures of all time. His countless awards and accolades include being named Sports Illustrated’ s Sportsman of the Century,” GQ’s “Athlete of the Century,” and being the recipient of the Presidential Medal of Freeman and the Amnesty International Lifetime Achievement Award. In addition to his groundbreaking achievements as an athlete, Muhammad Ali was a global citizen who dedicated much of his life to helping those in need. He facilitated the delivery of medical supplies to an embargoed Cuba, provided more than 22 million meals to the world’s hungry and helped secure the release of fifteen U.S. hostages from Iraq during the first Gulf War.