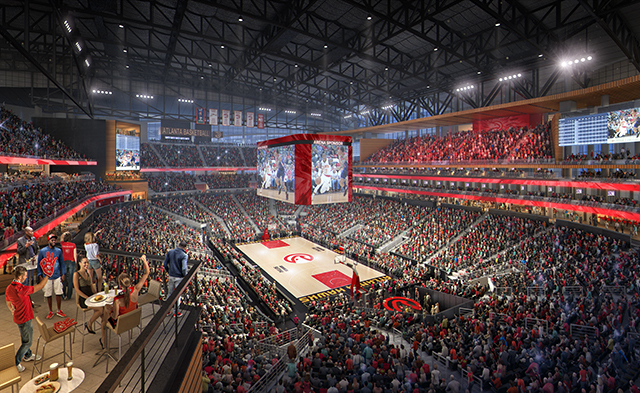 The US$192.5m renovation of Philips Arena, home of the NBA’s Atlanta Hawks, has now commenced, just a day after funding was approved by the Atlanta City Council.

Around US$110m for the renovation will be generated from the car rental tax collected at Hartsfield-Jackson Atlanta International Airport and other sites. An additional US$32.5m will come from the city’s sale of Turner Field, the former home of MLB’s Braves, to Georgia State University.

The Hawks will contribute US$50m. As part of the deal, the team’s lease was extended through the 2047-2048 season.

The renovation includes removing a wall of suites on one side of the arena, which is closed for four months before re-opening for the 2017-18 season.

Work is scheduled to be complete before the start of the 2018-19 season.

CNN reports that the NBA’s Atlanta Hawks have released new renderings of a US$192m, HOK-designed renovation to Philips Arena.

It’s the second-biggest redesign of an NBA arena, behind the recent remodeling of Madison Square Garden.

Construction began June 20 and is due to finish during the 2018-2019 season, which marks the Hawks’ 50th anniversary in Atlanta.

It’s so much more than a renovation. A renovation implies that we’re putting some paint on the walls, maybe you added a bathroom or two to your house. It doesn’t really denote to scale. We really are, with almost at $200 million, are going to be able to touch almost every thing and facing piece of the building.

When the project is done, the arena will have 360-degree connectivity to go with new restaurants and bars—including the first bar on an NBA floor. The Hawks Bar, in the shape of the team’s iconic ‘Pac-Man’ logo, will be just steps from the court.

The new center-hung scoreboard will be more than three times the size of the old one. For concerts, there will be new dressing room and backstage areas, as well as improved acoustics in the building.

About the Philips Arena renovation

The Atlanta Hawks announced plans for a US$192.5m renovation of Philips Arena – designed by HOK’s Sports + Recreation + Entertainment practice – back in late 2016.

Atlanta Mayor, Kasim Reed, said prior to the renovation getting underway: