Liverpool has unveiled ambitious plans to host a bold and inspiring 2022 Commonwealth Games that will speed up the transformation of its world famous waterfront and leave a lasting legacy for communities across the city and region.

Central to Liverpool’s unique bid to stage the Games is the riverside regeneration of the Bramley-Moore Dock – just two miles north of the city centre – which would be home to Everton Football Club’s new stadium.

The new football stadium – which is seeking to replicate the intimacy, fan proximity and atmosphere of Goodison Park – will accommodate a temporary athletics track for the Games without any disruption to those features. The track will be installed after the final home game of the 2021/22 season and will be removed before the first scheduled kick-off of the 2022/23 season.

As part of Liverpool’s transformational plan, which is predicted to accelerate £1bn of investment up to 10 years ahead of schedule and create more than 12,000 jobs, the city is also proposing to host: 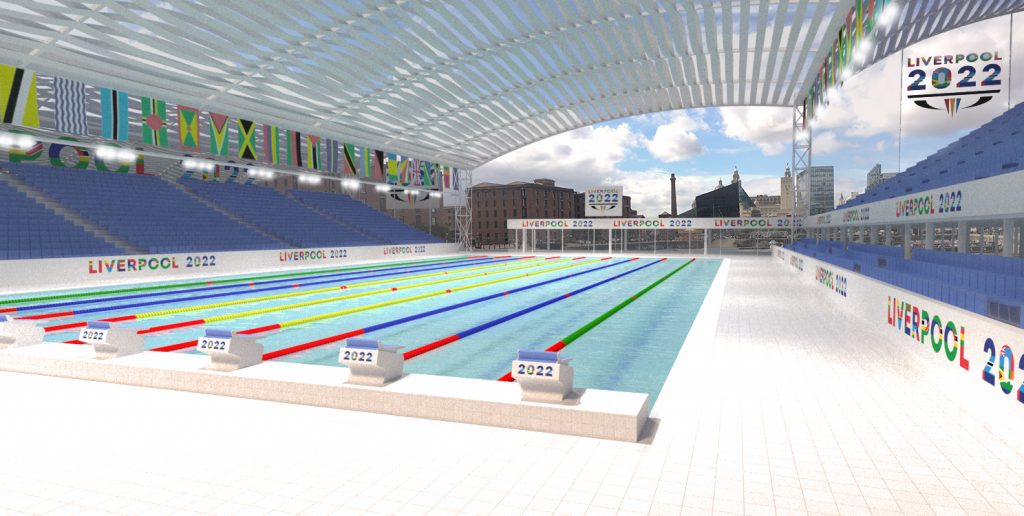 Other key highlights of Liverpool’s hosting plan include the following existing venues:

A further key element of Liverpool’s mould-breaking plan is to host the Athletes Village beside Everton FC’s new stadium in Nelson Dock, within Peel Land and Property’s £5.5bn Liverpool Waters scheme – residential developments that already have outline planning permission meaning construction could start in the first half of 2018.

The city also launched its official bid website: www.liverpoolCG22.org with a call to action for the public to back the bid via social media with the hashtag #IAmLiverpool2022. 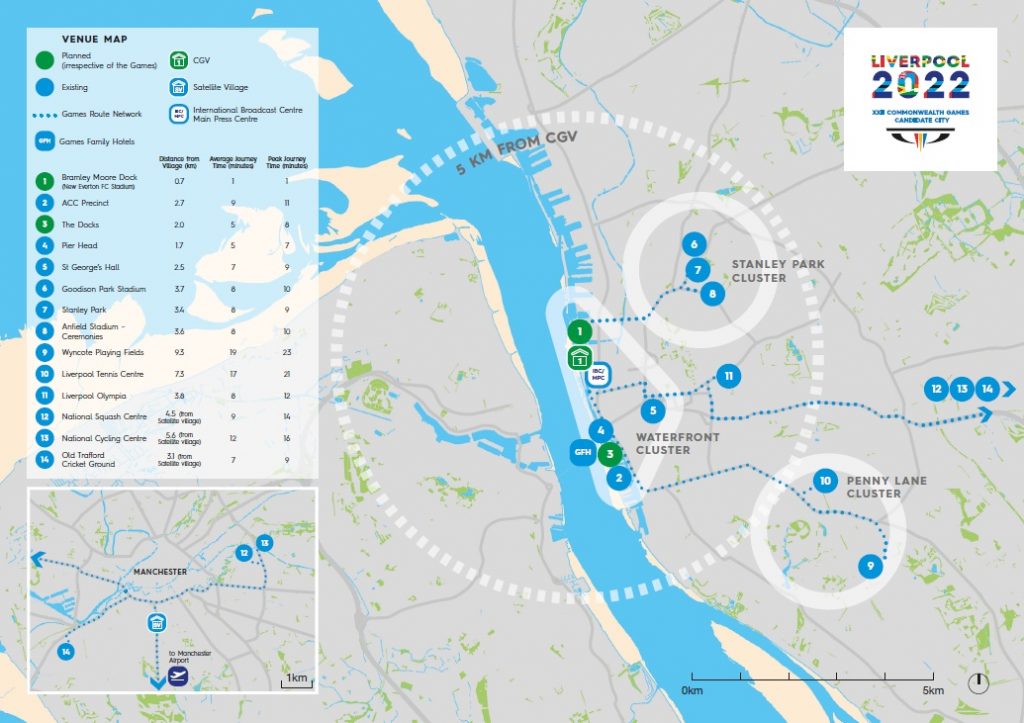 Liverpool is a world-class city and what we have unveiled today is truly transformational. We are utilising our existing, world-class venues such as ACC Liverpool, Anfield, St George’s Hall and Goodison Park, as well as facilities linked to the massive regeneration that is already taking place in the Bramley-Moore Dock area that would be home to the athletes’ village. Some of the other eye catching plans, such as the dynamic new pool in the docks and the creative approach to working with Everton FC’s new state-of-art-stadium will set the bar for how major games leave a real and tangible legacy.

We are also being transformational in how we present sports such as athletics, by bringing some of the jumping events to spectacular locations in our docks. Through a creative partnership with our North West neighbour Manchester we are able to host T20 cricket and track cycling in world class facilities. This plan is both compelling and deliverable and will be amazing for the athletes, the spectators and the Commonwealth – and crucially is designed to leave Liverpool transformed.

In this city we do things differently. Since being European Capital of Culture in 2008, Liverpool has undergone a renaissance through smart investments, forging great partnerships and building a reputation as a major event and cultural hub. This bid taps directly into this creative ambition, innovative approach and the uniqueness of our city which will transform not just how the world views the Commonwealth Games but will also transform the economic fortunes of our waterfront and countless lives across the city.

Our vision for the Games brings together ambitious new sporting facilities on the historic waterfront, with the existing world-class stadia revered by sports fans and athletes across the globe. This combination makes for a bid which I think is very hard for anyone to match in terms of ambition, creativity and sustainability and would result in a transformational games that would make Britain proud.

Everton Football Club is proud and excited to partner Liverpool City Council and support its commitment to delivering a landmark Commonwealth Games in 2022, one that will celebrate the city’s rich sporting history, showcasing the talent and energy within the Commonwealth. Significant progress is being made at Bramley Moore Dock and we are fully focused on the delivery of an iconic stadium, which will complement and enhance the city’s world-famous waterfront and deliver much-needed regeneration benefits to north Liverpool.

From the outset, our designers were tasked with developing an atmospheric and intimate stadium for our fans, attributes we know the City Council wishes to replicate for the Commonwealth Games. Having seen the work to date, we are confident that our teams will find that solution – a stadium that will meet the needs of the football club and provide a venue for a world-class Commonwealth Games Athletics programme.

Liverpool Football Club is delighted to support the Council’s bid to host the 2022 Commonwealth Games. Our great city has a unique passion for sport and we would be proud to welcome the Commonwealth to Anfield Stadium.

Liverpool is my home town and, having won four Commonwealth Games medals, it fills me with a huge amount of excitement and great pride to imagine the Games in our great city in 2022. The concept looks incredible and ideal for athletes given the compact nature of the plan and close proximity of the village to the venues. That makes a real difference to the athlete experience. We also have sport in our blood in Liverpool, and I know our passionate and friendly fans would ensure an amazing atmosphere. I can’t wait!

Manchester is delighted to be supporting Liverpool’s bid to host the 2022 Commonwealth Games. With the hugely successful Games our city held in 2002, and given the elite sporting venues we currently have in Manchester, we are pleased to be able to assist Liverpool in its quest to deliver an inclusive, innovative and inspiring Games for the Commonwealth.

The City of Liverpool submitted its Preliminary Phase Questionnaire to the UK Government’s Department for Culture, Media and Sport (DCMS) on Friday, as part of the ongoing candidate city assessment process.

The total cost of hosting the Liverpool 2022 Commonwealth Games is anticipated to be in the region of £672m, with £547m expected to come from the public sector. Liverpool City Council will contribute a quarter of this [£137 million] from its “invest to earn” strategy and existing resources as well as through various income steams raised from the Games.

Timeline: Following assessment of the Preliminary Phase Questionnaire, cities will enter a Secondary Phase Assessment process with the UK Government’s Department for Culture, Media and Sport (DCMS), which is expected to make a decision on the Candidate City in September 2017. The CGF is expected to announce the host of the 2022 Commonwealth Games by the end of 2017.