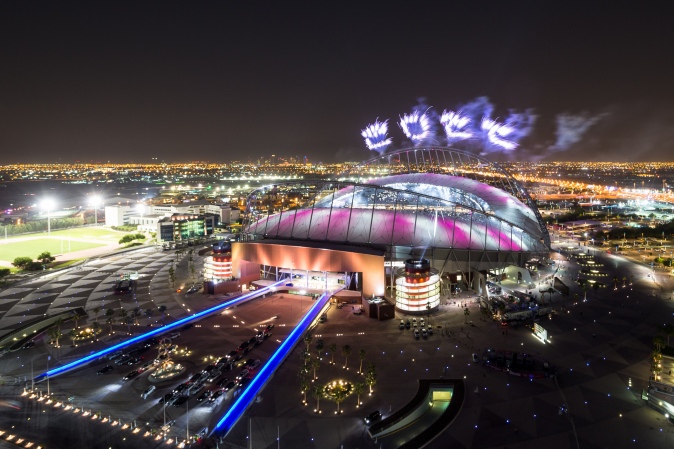 More than 40,000 soccer fans packed into the new Khalifa International Stadium last Friday, May 19, to watch the 2017 Emir Cup final, which also marked the spectacular launch of the stadium; the first proposed host venue of the 2022 FIFA World Cup™ to be completed. HH the Emir Sheikh Tamim bin Hamad Al Thani was on hand to conduct the official ribbon-cutting duties in front of the sold-out crowd.

The official inauguration ceremony included a light show from the newly installed LED lights, a performance from the Emiri Guard and a stunning fireworks display that saw pyrotechnic experts display ‘2022’ in the sky above the stadium in fireworks to mark the opening of the FIFA World Cup™ venue.

The final of Qatar’s biggest domestic trophy, the Emir Cup, kicked off shortly after the official opening, marking the stadium’s first sporting event, which saw ex-FC Barcelona player, Xavi Hernández, lift the trophy in front of the packed stadium.

As organisers, to see a 2022 FIFA World Cup stadium already delivered and fully operational is a great joy, besides giving us confidence regarding the level of preparations in Qatar. There is undoubtedly strong commitment from the local authorities through the Supreme Committee and although five years seems a long way off, the benefit of time will make sure Qatar delivers an amazing tournament in 2022.

Expanded to seat 40,000 fans, the stadium has undergone extensive renovation works ahead of the tournament, during which it will host matches up to the quarter-finals. This transformation included the installation of the revolutionary cooling technology promised during Qatar’s successful bid, which kept the pitch at 20°C and the stands at 23°C – despite temperatures of 37°C – and all while using 40 percent less energy than traditional cooling methods.

It is proof of what we’ve always said. People thought the cooling technology was only a dream. The reality is it was in Al Sadd Club, and today it is in Khalifa International Stadium. It is continuing, becoming something normal and deliverable, and the delivery is on the ground. It showcased the capabilities and the quality that we have.

Everybody worked very hard, and delivered a stadium that is according to the standards that we promised for the World Cup. Operationally the team has done a fantastic job, and it’s just the start. There’s more to come, expect amazing, we’re delivering amazing.

The completion of our first stadium more than five years before the Qatar World Cup begins is an important milestone that reflects our determination to deliver a tournament the entire Arab world is proud to be a part of. As we promised in our bid, our innovative stadiums offer an unrivalled experience to fans and players alike. I’m proud we can show these off to the world and welcome fans with the hospitality this World Cup will be remembered for.

Other new features at the Khalifa International Stadium include the installation of a larger roof over the entire spectator area, with an intricate net of German and Italian-made steel tension cables weighing 4,000 tonnes holding 92 panels in place, while the stadium will also be the first FIFA World Cup™ venue and the first stadium in the region to be lit by LED lighting, which is both more sustainable and more versatile than traditional lighting.

Even the pitch has a rich story to tell: designed to be perfectly suited to Qatar’s climate, it was developed at the SC’s nearby Turf Nursery – the only one of its kind in Asia – and was laid in a new world record time of 13½ hours.

Khalifa International Stadium is close to Qatari hearts and has seen some of Qatar’s biggest sporting occasions over the years since it was first launched in 1976. It was therefore a fitting venue for the biggest match of Qatar’s football calendar, the 2017 Emir Cup final between Al Rayyan and Al Sadd. I’m glad the fans got to enjoy this event in such a magnificent remodelled stadium.

Located in the world-famous Aspire Zone, Khalifa International Stadium already offers a range of nearby leisure amenities. And, during the FIFA World Cup™, fans will also be able to travel to and from the historic venue via a dedicated metro station on Qatar’s national metro project, QRail. Once completed, Qatar’s tournament infrastructure will keep journey times between all FIFA World Cup™ stadiums and accommodation locations below one hour, enabling fans to watch more than one live match per day for the first time in FIFA World Cup™ history.

Originally constructed in 1976, the Khalifa International Stadium has hosted the Gulf Cup on two occasions, as well as the FIFA U-20 World Cup in 1995, the 2006 Doha Asian Games, the 2011 AFC Asian Cup final and international friendly matches.