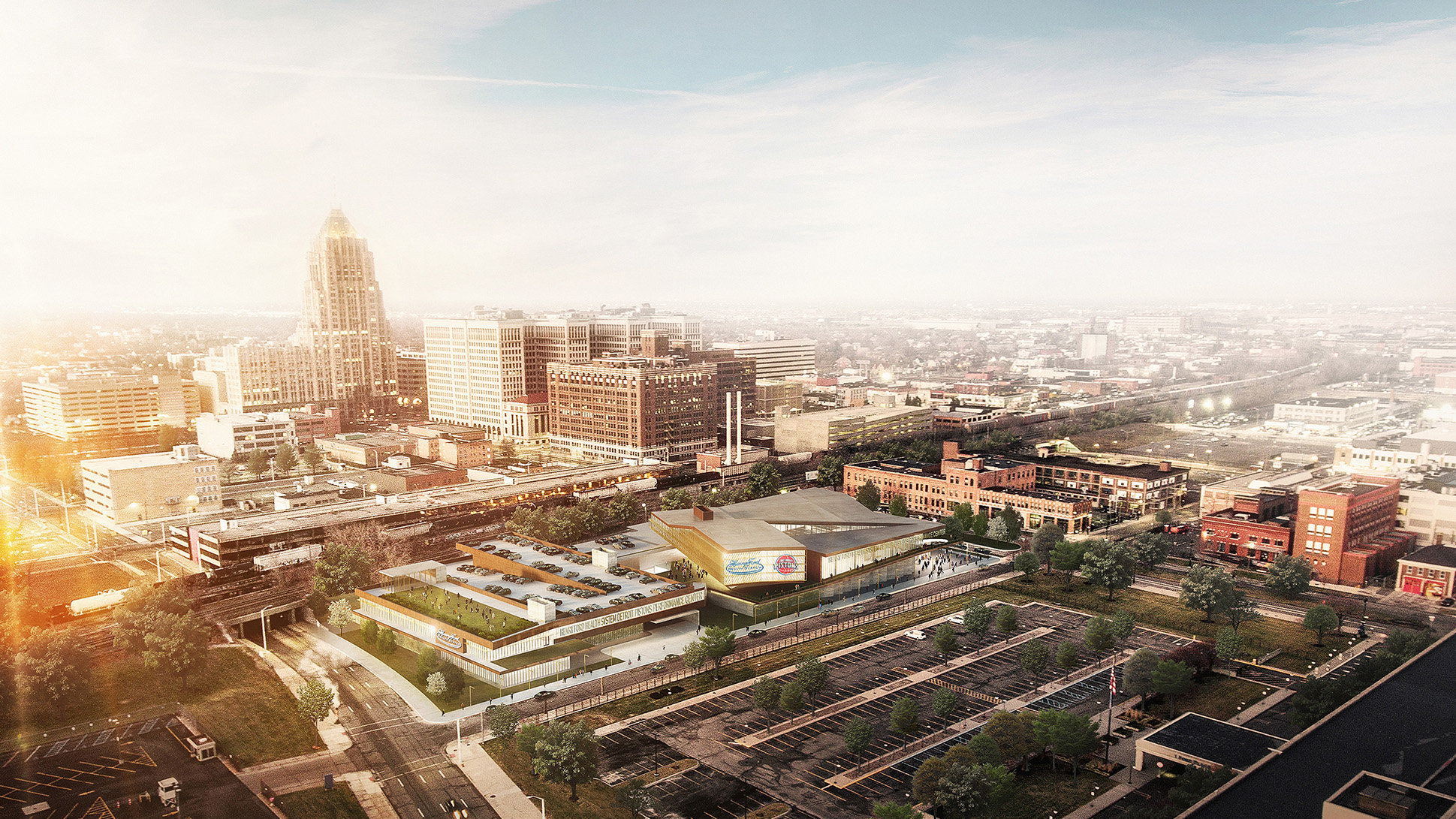 The Detroit Pistons, together with Henry Ford Health Systems, have announced plans for a brand new, state-of-the-art training, rehabilitation and sports medicine complex near Tech Town, just a few blocks from the Fisher Building.

The multi-discipline facility will be designed by Detroit-based architectural firm ROSSETTI. The Pistons and the well-known architectural firm have enjoyed a long lasting relationship since the conception of the ROSSETTI-designed Palace of Auburn Hills in the mid 1980’s.

The new training, rehab and sports medicine building is a partnership between the Pistons and Henry Ford Health Systems, who will be the healthcare provider for the team starting with the 2017-18 season. As part of the agreement, the healthcare provider will also have the naming rights to the new performance centre complex, which will be known as the Henry Ford – Detroit Pistons Performance Center.

The facility will be built on a parcel of land owned by Henry Ford between Wayne State University and Henry Ford Hospital, approximately two miles north of the new Little Caesars Arena where the Pistons will begin playing games next season.

This is a groundbreaking alliance between two institutions committed to making a difference in Detroit. We are very excited to work with Henry Ford Health System on this innovative project, which is so much more than a simple sponsorship or naming-rights deal. It’s a long-term partnership that establishes another building block in the revitalization and rebuilding of our city.

Tom has often described the Pistons as a ‘community asset,’ and we feel the same way about Henry Ford Health System. We have always believed that investing in our community and supporting our neighbors is vital to the healthcare we provide. We are so pleased to partner with the Pistons on this exciting new venture to combine Henry Ford’s medical excellence and innovation with a world class facility to serve our community for years to come.

Stan Van Gundy, President of Basketball Operations and Head Coach of the Pistons, said the new Performance Center will be innovative and unparalleled in the NBA:

It’s going to be a state-of-the-art performance center for our players, augmenting our normal practice facility resources with comprehensive health, conditioning, nutrition and medical support. It will bring together basketball, nutrition, training, treatment and rehabilitation resources under one roof, in an environment that will put our players in the best position to succeed.

Beyond this wonderful new complex, it’s truly a privilege for us to become the official healthcare provider of the Detroit Pistons. Henry Ford is the only provider in Michigan that offers a true ‘team medicine’ approach. Knowing that a patient’s needs extend beyond orthopedics, we provide a broad range of specialists with sports medicine training, including everything from neuroscience and cardiology, to sleep medicine and pain management.

In addition to the centre’s sports, training and medical facilities, the privately-financed facility will include corporate offices for the Pistons and PS&E staff, as well as public activation spaces.

The team at Henry Ford Health System shares our commitment to community and our vision of creating a center that will be an asset for everyone in Detroit. It’s an ambitious project that will create more jobs, generate new revenue for the city, deliver innovative medical services and provide new space for community programs.

The facility will also incorporate public spaces available for community relations activation, networking receptions and team-hosted events. In addition, it will hold community events, such as youth basketball clinics and Pistons Academy basketball programs, along with fitness, health and nutrition programming through the Detroit Pistons Fit and annual NBA Fit Week programming.

The facility will be a trendsetter in the NBA, with basketball practice areas directly connected to a newly developed, multi-faceted and comprehensive sports medicine centre. The performance centre will house an estimated 100,000sqft of the most-up-to-date basketball training equipment, while a short walk will allow seamless accessibility for players and team medical practitioners providing injury diagnosis and rehabilitative treatment.

Internal development is one of the most important aspects of building a winning team, while health, injury prevention and rehabilitation are crucial to team performance. The new performance center will provide our players the most advanced, cutting-edge technology available in an environment that will condition and train them to the best of their ability.

Bringing so many resources together in one place is expected to revolutionize the integration of sports science and research into the day-to-day schedule of each player. Technology, analytics and innovation will drive both training and recovery processes and equipment in the new building.

Some amenities of the new training/sports medicine facility include:

The new Henry Ford – Detroit Pistons Performance Center will create additional construction-related jobs in the short-term and provide future economic impact for Detroit by way of city income tax and property tax revenues generated by the organisation’s relocation of business and basketball operations to the city.

The new performance centre is part of Henry Ford’s ongoing commitment to facilitating economic development in the New Center and greater Midtown areas. In addition to a much-anticipated groundbreaking on its own new cancer facility across from Henry Ford Hospital, Henry Ford recently sold an unused parcel of land for the expansion of the Motown Museum, and, a parking lot to make way for the new retail and housing development adjacent to the Fisher Building on W. Grand Boulevard. Additionally, Henry Ford has long supported the effort to expand the M-1 rail project, among other initiatives.

ROSSETTI, an internationally-renowned Detroit-based architecture-engineering firm, has been hired as the leading architects on the project. ROSSETTI is a global architectural design and planning firm servicing clients across a wide expanse of markets, including sports and entertainment, corporate, hospitality and retail. For 47 years, the practice has approached design as an opportunity to enhance the experience of those who use their buildings. ROSSETTI’s work includes architecture and interior design for showcase properties including Ford Field, the USTA National Tennis Center, Daytona International Speedway, Red Bull Arena, the Compuware Building, Cobo Hall Convention Center, The Chase Building and Greektown Casino Hotel. Most recently, ROSSETTI served as lead architects on the new Los Angeles Lakers UCLA Health Training Center.

The Pistons will provide additional details about the new performance centre, including additional renderings and design plans, at a later date.

Groundbreaking on the Henry Ford – Detroit Pistons Performance Center has been scheduled to commence towards the middle of 2017.

Source: This news piece has been adapted from the press release published by Henry Ford Health System, which can be found online at: https://www.henryford.com/news/2017/02/detroit-pistons-and-henry-ford-health-system and also from an article written by Robin Runyan for Curbed Detroit. To be directed to the original article, click here.