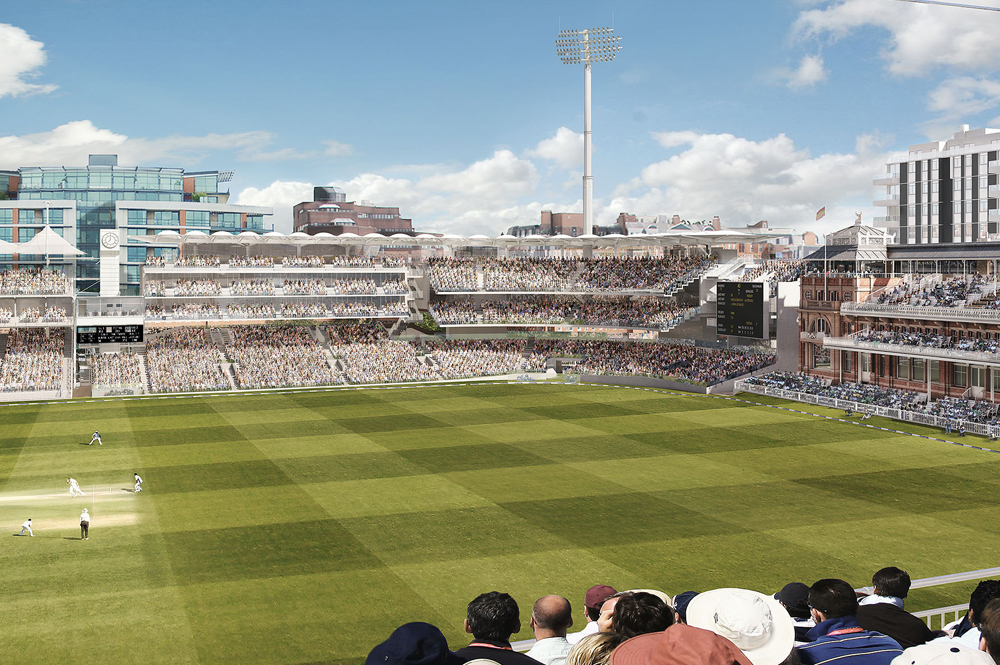 Lord’s – the home of England cricket – has become the first cricket ground in Great Britain to run on 100% renewable energy, as new figures reveal the increasing disruption to cricket caused by extreme weather patterns linked to climate change.

New England & Wales Cricket Board (ECB) statistics illustrate that extreme weather in December 2015, which has been linked to climate change, caused more than GB£3.5m-worth of damage across 57 cricket clubs. Increased rainfall is also causing significant loss of fixtures in recreational cricket and impacting on the professional game. The ECB distributed more than GB£1m in emergency funding to flood-affected clubs in 2016, with a further GB£1.6m earmarked for 2017.

The new Warner Stand, which will be opened in April 2017, is symbolic of the Marylebone Cricket Club’s (MCC) – the world’s most active cricket club, the owner of Lord’s and the guardian of the Laws of the Game – sustainability drive. The innovative structure, designed by world-renowned architecture practice Populous, includes photovoltaic roof panels for electricity generation and a state-of-the-art water collection and recycling system.

The MCC has developed a broad sustainability programme, meeting its 2020 emissions targets last year and reducing its electricity use by 7% since 2010. 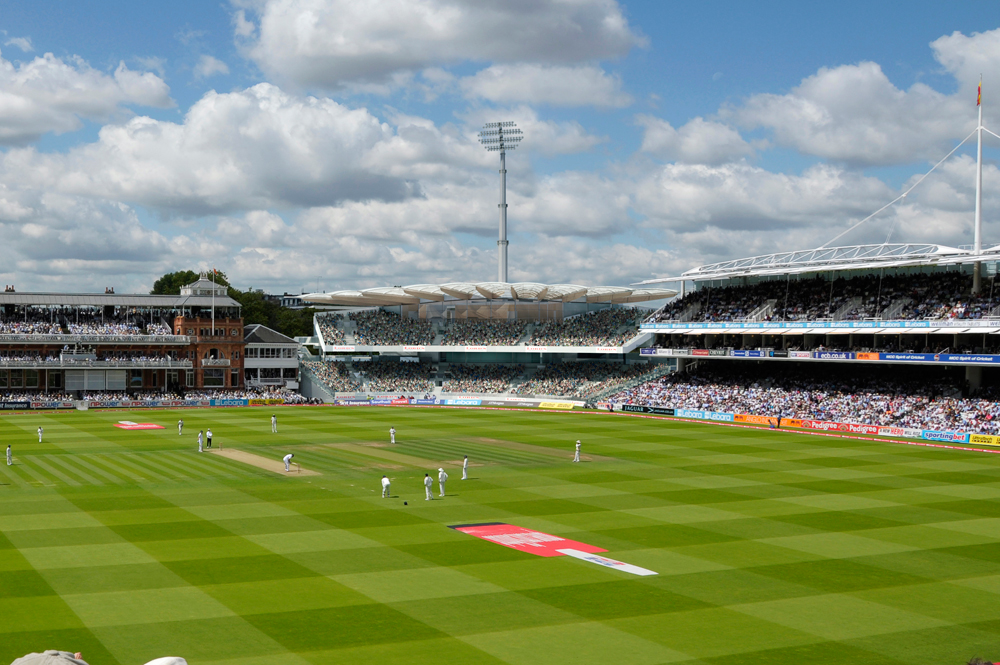 View of the new Warner Stand from the Edrich Stand

It is important that all organisations embrace sustainability and I’m very pleased that Lord’s has become the first cricket ground in the country to run on 100% renewable energy.

The statistics released today illustrate the effect that changing weather patterns can have on cricket, and the ECB deserve a lot of praise for the support they give clubs across the country that are so badly affected by extreme weather.

The announcement launches the annual ‘Show The Love’ campaign from The Climate Coalition, whose members include WWF-UK, the RSPB, the National Trust, the Women’s Institute (WI) and Christian Aid. It also accompanies the publication of a ‘Weather Warning’ report highlighting how extreme weather conditions are affecting some of Britain’s favourite places – from gardens to local pubs, rivers to our parish churches, iconic cliffs to woodlands.

The MCC is determined to ensure that Lord’s remains world-class, as well as world-famous. Accordingly, it has invested more than GB£50m over the last twenty-five years, in various ground modernisation projects. This investment programme has resulted in the construction of four new stands (including the award-winning Mound Stand), MCC’s Cricket Academy and the futuristic J.P. Morgan Media Centre.

Far from resting on its laurels, the MCC has been investing even more money to ensure that Lord’s has both a unique historic appeal and truly state-of-the-art sporting facilities.

The South-Western Project (SWP) at Lord’s

The SWP is the single largest phase of the Masterplan for the redevelopment of Lord’s. Designed by Populous, the architects of the new Warner Stand, as well as iconic venues such as the London Olympic Stadium, the SWP entails: a replacement for the Tavern and Allen Stands; a new Thomas Lord Building; a new Lord’s Tavern pub; and internal reorganisation of the Pavilion and Memorial Building to provide more room for cricket teams and staff.

It also will aim to open up the area around the Grace Gates on St John’s Wood Road to establish a more welcoming public realm.

The key components of the scheme are:

There are several key reasons why the Club is choosing to develop this area of the Ground: 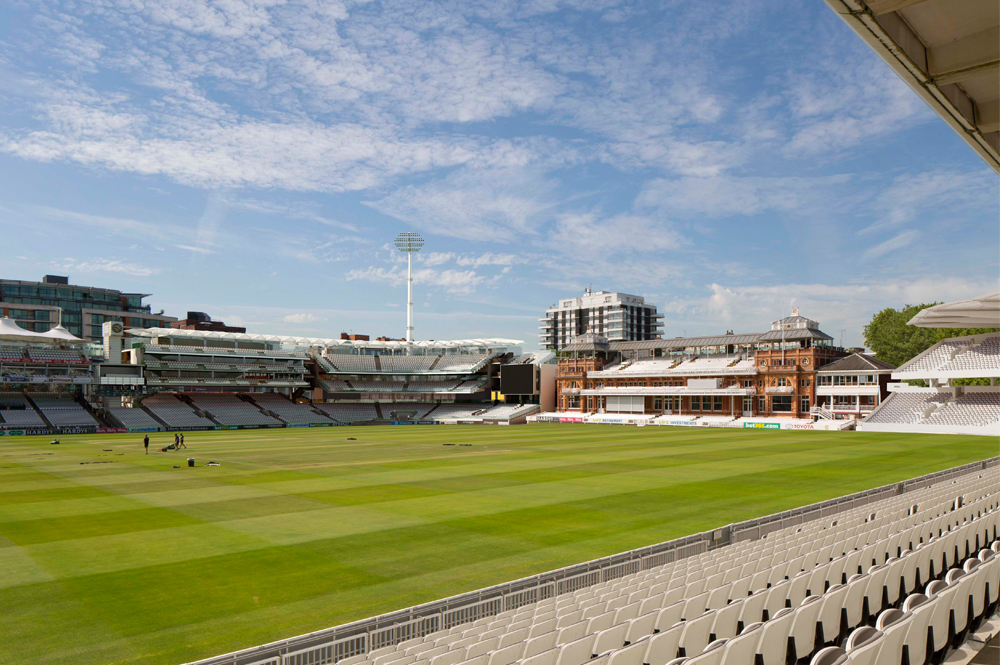 Superimposed view of the SWP

The MCC submitted the planning application to Westminster City Council in July 2015, with approval confirmed in November of that year.

Following the consent given by the planning committee at Westminster City Council, MCC is delighted to have today received the Mayor’s endorsement for its South-Western Project (SWP) plans at Lord’s Cricket Ground.

The SWP is designed to ensure that Lord’s provides the very best facilities for players and spectators alike, and that the Ground remains truly world-class in everything it has to offer.

A five-year consent was submitted because the Club awaits the England and Wales Cricket Board’s decision – expected in 2017 – on the programme of international matches for 2019-2022.

Today’s announcement means the Club can conclude the legal procedures associated with the planning consent and look forward to making progress on these ambitious plans from Autumn 2019 onwards.

Watch a CGI fly-through showing the SWP at Lord’s online at: https://youtu.be/ViF-lby9Vgs

In 2014, the MCC received planning permission from Westminster City Council to replace the Warner Stand and construction began on 2 September 2015.

The Warner Stand is the first to be developed for three principal reasons:

The original Warner Stand was completed in 1958 and was no longer fit for purpose. Aside from the poor sightlines from hundreds of seats in the stand, and the sub-standard match-control facility, the stand had no lifts and too few entrances and exits, meaning it could not cater for wheelchair users or those with mobility difficulties.

When the new Warner Stand opens in April 2017, it will feature 2,656 seats, and combine outstanding facilities with innovative architecture. It will include the following features:

Providing cover to the new stand will be a semi-translucent fabric roof, supported by cantilevered oak beams. This style of roof is the first of its kind in the country, and is reflective both of advances in timber technology and a modern preference for the use of sustainable, replaceable materials in architecture. The fabric will ensure most spectators in the stand and all users of the restaurant benefit from both shade and a high degree of natural light.

The new stand can be seen as a microcosm of what MCC is trying to achieve with its Masterplan – an improved experience for all spectators, facilities that will put the Club in the best possible position to host major matches, improved circulation around the Ground, all within an iconic architectural environment.

The new Warner Stand will become the first new Members’ Friends’ Enclosure to be built at the Ground since the Tavern Stand in 1967.

To keep up to date with the progress of the new Warner Stand construction ‘like’ the Facebook page run by constructors BAM. 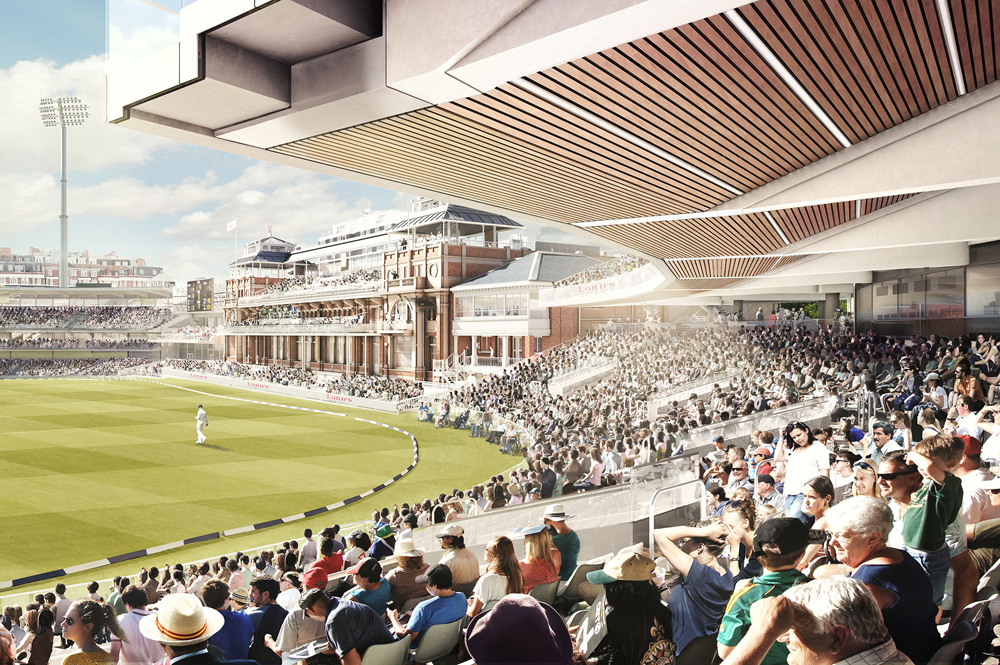 View of the Pavilion from the new Warner Stand