FAN ENGAGEMENT: From match day to every day 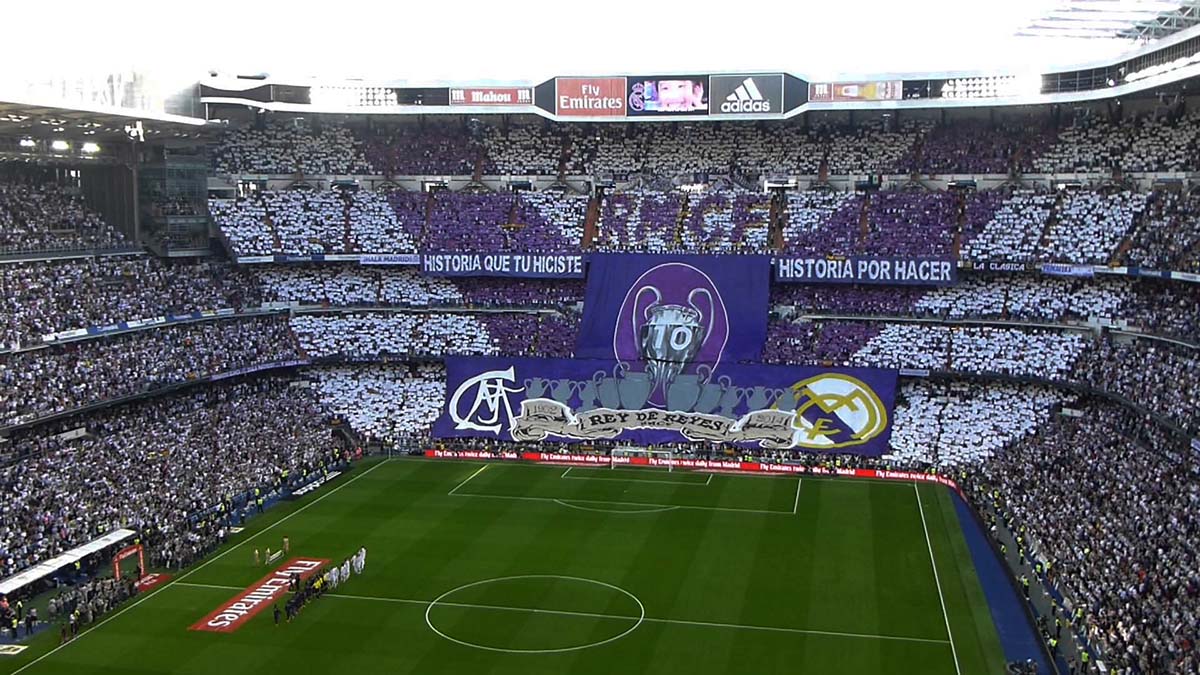 In this article, well-known industry experts David Fowler and Geoff Wilson look at how engaging your fan base and enhancing their experience when they are at the stadium on match day has been a challenge for many sports clubs to get to grips with. However, as most clubs slowly find their feet, the new battleground of fan engagement is the period between match days, as Fowler and Wilson explain.

Progressive sports clubs are shaping a holistic fan engagement strategy as they push beyond the match day in search of the “every day”. They recognise that fan engagement must play a central role in their overall growth strategy and that a balance of activities reflecting each of the below four strategies is key. They also recognise that every fan engagement touchpoint represents an opportunity to collect data that can drive further value to the club, to fans and to sponsors. 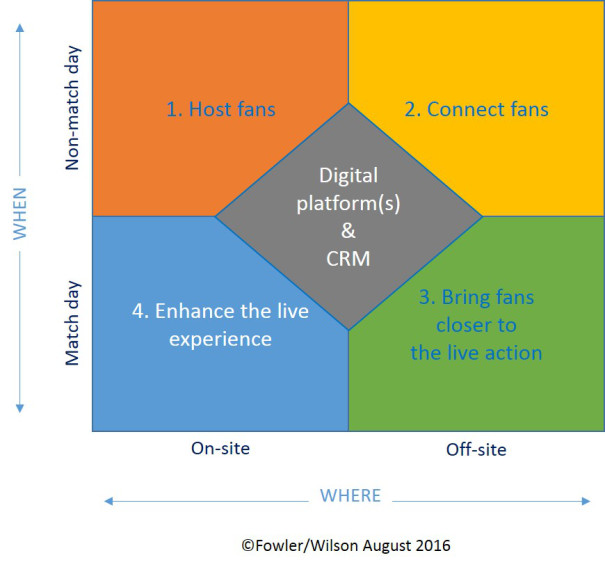 Non-match days provide opportunities to “host” fans at your venue and make them feel part of the club by giving them an intimate experience. Stadium tours are a well-established way to achieve this. EE has shown with their smart guide (produced for the Wembley stadium tour), that the integration of technology can enhance the traditional idea of a stadium tour and present valuable data collection opportunities.

Museum tours are another area touched by the digital revolution. The Minnesota Vikings are using virtual reality to bring their rich history to life for fans. The so-called “Vikings Voyage” is a 10,000 square foot interactive experience located at the clubs U.S Bank Stadium.

English Premier League (EPL) club Tottenham Hotspur showed how a venue can be used to host fans and serve the community. Their use of the clubs facilities to host job fairs which connected over 3,000 local job seekers and over 90 employers won “best non-match day use of venue” at the 2015 Football Business Awards. Equally, Manchester City’s “Hackathon”, hosted at the City Football Academy, was a great way to host and engage with new target audiences. This kind of innovative use of your venue can be augmented further by integrating participant data into your customer relationship management (CRM) system.

Fans are tribal and want to feel connected to fellow fans as well as the club itself. Facilitating these connections is critical to an everyday fan engagement strategy. A classic example here is Liverpool FC’s (LFC) tie-up with Skype whose platform is helping the club to connect LFC fans via the “LFCofficial” Skype account.

Top sports clubs are becoming more like media houses producing lots of content to fulfil and satisfy the craving of fans for information on players and team news. Developing exclusive content outside of match day is a challenge not to mention the issue of feeding the multiple channels that the average club now operates.

Chatbots, computer programmes designed to simulate intelligent human conversation, promise to play an increasingly influential role in driving content consumption amongst fans. The NBA showed what is possible with the introduction of a Facebook Messenger chatbot around the 2016 NBA Finals that helped fans locate historical NBA content featuring the two teams.

Fantasy sports has taken off in the USA and beyond with a number of technology companies offering fans the ability to play fantasy games from one match to the other. The Fantasy Sports Trade Association claim that daily fantasy players consume on average 40% more sports content than non-players do. While Fan Duel and Draft Kings have grabbed the headlines, new players such as Sportego are emerging. This Irish-based company is currently working with the SSE Airtricity League, West Bromwich Albion FC, Bury FC and a host of other clubs in this area.

eSports are likely to continue to be an attractive area for clubs (and sponsors) in terms of fan engagement. A number of professional football clubs such as Man City, Wolfsburg and West Ham have signed agreements with eSports players. This is hardly surprising given that in 2014 eSports had 205 million global viewers and many analysts estimate the market to be worth between $460- $500 million.

Engaging those fans who are not in the stadium on match day is a key challenge for most sports clubs, particularly since live content rights can be tied-up with central media rights partners. Clubs have become more creative in recent years with the development of behind-the-scenes content (such as tunnel cams and creatively deploying Go Pro cameras). Many are also serving a broader base of fans by creating a presence on new platforms in new markets (e.g. Bayern Munich has been very successful in China via their Weibo and WeChat presence).

Wayne Rooney showed what is possible in the absence of broadcast right restrictions when he broadcast his testimonial match, featuring Manchester United FC and Everton FC, on his Facebook page via Facebook Live. Watch out for more clubs leveraging this live streaming functionality.

As virtual reality technology continues to develop apace, many are predicting the dawn of an era when sports clubs can offer an infinite number of fans a pitch side view of the action via a VR headset from the comfort of their sofa.

For now at least, the live experience is at the core of the value proposition for sports clubs. Empty stands lead to a flat atmosphere for the players and those watching at home. Therefore, this must remain the cornerstone of a clubs fan engagement activities.

For many sports clubs, fan engagement rightly begins with understanding the fan journey and ensuring “pain points” are addressed. The Miami Dolphins, leveraging IBM’s Intelligent Operations Centre technology, smooth the fan journey by monitoring and reacting to weather forecasts, parking delays and even concessions shortages at specific stands in the Sun Life Stadium.

Live entertainment before the match and at half time, including dedicated fan zone areas with live music, football games etc., can add significant value to the match day experience. Manchester City’s “City Square”, a fixture in the match day ritual for city fans, is an award-winning example of how to build such a concept.

Stadium Wi-Fi is increasingly expected (and can be a crucial facilitator of fan data collection) yet in certain stadia slow networks have been a source of frustration. Levi’s Stadium (home to the San Francisco 49ers) has a Wi-Fi access port for every 100 seats in the stadium and for the fan who doesn’t want to leave his or her seat, there is a specially developed app to order food and watch on-field replays.

Providing behind-the-scenes content and serving this exclusively to fans at the game is a valuable way to reward those that have come to the stadium (Manchester City do this particularly well at home games in the EPL). In 2014, the Sacramento Kings teamed up with Google to equip mascots, reporters and dancers with Google Glass and enabled fans to stream the resulting intimate courtside views through their mobile devices.

GPS player tracking technology is advancing at a rapid pace allowing coaches to track individual player data. As we move into the future, it is a question of when not if this data will be used by clubs to enhance the live experience.

The importance of having an integrated fan engagement platform

More and more sports clubs recognise the importance of having a digital platform on which fans and fan engagement activities are hosted 365 days per year. The best platforms integrate activities across all four of the fan engagement strategies outlined here.

A good example is the Real Madrid App. It includes replays from multiple angles for fans at the stadium (enhancing the live experience), match feeds with real time stats and tunnel cam (bringing fans closer to the live action), possibilities to create your own fan profile (connecting fans) and access to the Real Madrid store (hosting fans).

As CRM continues to be an important source of business growth for sports clubs, platform choices are more important than ever. Proprietary social media platforms, which give greater access to fan data than a third party platform such as Facebook, are now an interesting option and one being taken up by more and more clubs. The Real Madrid app, which is linked in to a back-end CRM system, is again a good example.

Engaging fans from one match day to the next

It’s not easy to go from match day to every day but hopefully we’ve given you some food for thought to bring your fans closer to your club and reduce your reliance on the match day experience.

Technology is likely to continue to shape the future of fan engagement and, for example, chips implanted in fans that allow a club to engage with them on a far more sophisticated level than we can imagine today, promise to test today’s legal frameworks and ethical standards.

Equally, technologies like that recently patented by Apple that can disable the recording function on a smartphone (primarily foreseen to stop fans recording and sharing live music performances) may also help to ensure the focus of fans remains on the core product on the field of play.

Ensuring that you are engaging and not annoying your fans, as well as not distracting from your core product, are probably the biggest challenges you will face in moving from match day to every day.

David Fowler is a Chartered Marketer with more than 15 years’ experience in international sports marketing roles. You can follow David on twitter (@davidgfowler) or connect on LinkedIn (linkedin.com/in/davidgfowler).

Geoff Wilson runs his own Sports Consultancy, working with clients such as FIFA across the world. He is also on the board of Tourism Northern Ireland. You can follow Geoff on twitter @geoffwnjwilson or connect on Linkedin at linkedin.com/in/geoffwnjwilson.