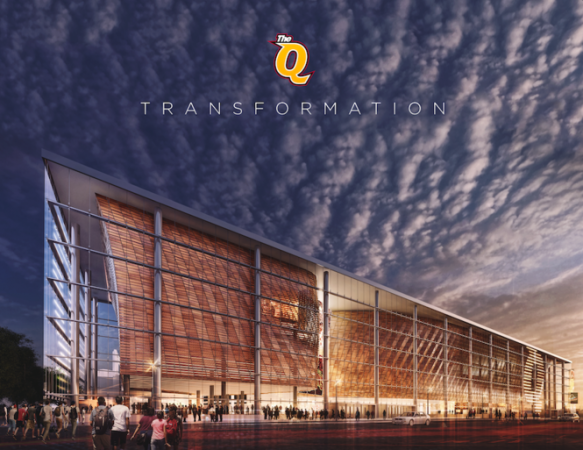 The 22-year-old home court of LeBron James is finally getting a major makeover, with the Cleveland Cavaliers having announced plans for a US$140m project to renovate Quicken Loans Arena (‘The Q’), the downtown home of the NBA champions since 1994, as reported by The Associated Press via NBA.com.

The Cavs and Cuyahoga County officials believe the arena needs an exterior face-lift and the massive interior upgrades have been designed so as to better accommodate fans and attract future events. The Q currently hosts 200-plus events annually. The Republican National Convention was held there in July.

Under the proposal, the Cavs, who are extending their lease to 2034, will pay US$70m, with the balance being picked up by the county to expand the arena. The Q will remain open during construction, which is slated to begin in 2017, and take approximately two years to complete.

As part of the reconstruction, the building will be modernised with a glass front, and public gathering spaces will be added, along with food and beverage areas.

Once the project is completed, the Cavs are hoping to host the NBA All-Star Game. Cleveland last hosted the event in 1997.

The NBA is very supportive of the Quicken Loans Arena transformation project which we believe will greatly benefit the entire Cleveland community. We understand the impact this project will have in continuing the great momentum we have all seen recently in the city.

We look forward to holding our week of NBA All-Star events in Cleveland in the near future following the successful completion of The Q transformation project.

SHoP Architects and ROSSETTI are the design practices responsible for the transformation.