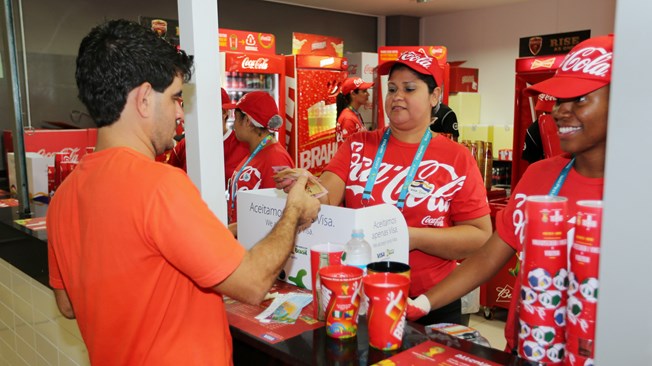 FIFA has confirmed that Moscow-based company, Arenafoods Catering, has been chosen as the Public Food and Beverage Concessionaire for the 2018 FIFA World Cup Russia™ and the FIFA Confederations Cup Russia 2017.

Arenafoods was chosen following an international public tender process that included submissions from 15 food and beverage companies based in Russia. The project will be one of the most complex F&B operations in Russia and Eastern Europe, including approximately 400 concessions or more than 2,200 points of sale at 12 venues, and will create approximately 8,000 staff positions for the 2018 FIFA World Cup Russia™, and approximately 86 concessions and up to 3,000 staff at the FIFA Confederations Cup being held this June/July.

Providing football fans with a world-class in-stadium experience is critical to FIFA and the Local Organising Committee. A top-quality food and beverage programme is a vital component of the stadium experience and we are thrilled to have such a reputable partner in Arenafoods to provide this service. The size and scale of the public food and beverage programme for the 2018 FIFA World Cup™ and the FIFA Confederations Cup 2017 is significant and we are confident that ArenaFoods will provide an interesting menu and deliver a successful operation to football fans from around the world.

We are honoured to have been selected by FIFA to manage the food and beverage concessionaire programme for the 2018 FIFA World Cup Russia™ and FIFA Confederations Cup Russia 2017. We now look forward to working in close collaboration with FIFA and the Local Organising Committee to leverage our experience, scale and expertise to bring an expertly crafted culinary experience for football fans attending the matches.

The FIFA Public Food and Beverage Concessionaire Programme will be responsible for overseeing F&B catering for general public ticket holders for both tournaments. The tender process focused on ensuring that the chosen firm would provide high-quality products of an international and local flavour across all venues. The menu will cater for international spectators but will also offer typical Russian food, such as kulebyaka (a traditional Russian pie).

Fans can apply for tickets for the FIFA Confederations Cup on FIFA.com/tickets. Across both events, close to 3 million tickets will be available to the public for matches at the twelve FIFA World Cup stadiums and approximately 780,000 tickets for matches at the four FIFA Confederations Cup venues. The programme will also provide temporary employment for thousands of local Russian workers in the eleven Host Cities.

At the 2014 FIFA World Cup™ in Brazil, more than 9,000 temporary jobs were created for Brazilian workers at the public concession stands with over 3.1 million food and beverage transactions taking place at the stadiums over the course of the competition.