HBF Arena redevelopment on track to complete by September 2017 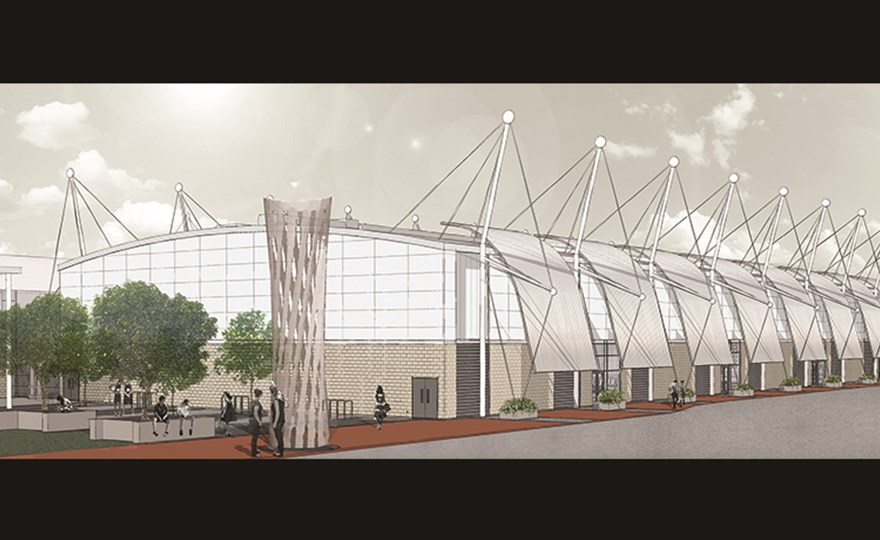 Work is well underway on the multi-sport expansion of facilities at HBF Arena, which is on track to be delivered by September 2017.

Stakeholders VenuesWest, the City of Joondalup, LandCorp, Department of Finance Building Management and Works, West Perth Football Club and Wanneroo Basketball Association with joint venture contractors EMCO Building and Jones Coulter Young Architects, are working together to deliver bespoke facilities that will significantly enhance the individual sports of basketball and football and ultimately the local community.

The new developments will have the capability to host major sporting events, and VenuesWest looks forward to welcoming the West Perth Football Club and Wanneroo Basketball Association into their new facilities next year.

Following the award of the contract for the design and construction of new basketball and football facilities at HBF Arena, designs are now complete following input from all stakeholders on both aesthetic and operational aspects of the new facilities.

On 5 September, award-winning commercial building company EMCO Building officially occupied the site and commenced site preparations. As such, construction fences and signage have been erected around the precinct to ensure the safety of patrons both whilst parking and moving around the venue.

The site fencing provides stakeholders, patrons and staff a first-hand indication of the locations of the new facilities and size of the two new buildings.

VenuesWest will now work with West Perth Football Club and Wanneroo Basketball Association to develop their respective agreements to enable occupation and use of the facilities once completed. Based on positive discussions so far all parties expect early completion of the agreements.

EMCO will construct the full scope of works for both football and basketball, which include new function areas, new player amenities, football development services and administration/member facilities for the West Perth Football Club.

Furthermore, a new four court basketball stadium will be constructed at the front of HBF Arena, providing a new home for the Wanneroo Basketball Association. As well as new courts, the basketball development will also include an administration area and player amenities.

Premier Colin Barnett turned the first sod of soil to mark the beginning of the next stage of a A$20m Liberal National Government election commitment to redevelop HBF Arena in Joondalup on October 4, 2016.

Mr Barnett said $A4.3m was allocated in the 2016-17 State Budget to finalise the HBF Arena works.

The new four-court basketball facility is being built for the Wanneroo Basketball Association and includes a 500-seat show court, an administration area and player amenities, to replace their former home at Joondalup Basketball Stadium.

Perth’s northern suburbs are one of Australia’s most rapidly expanding population corridors and the community deserves a sporting hub it can be proud of.

HBF Arena already services about one million patrons each year, and the new sporting facilities are expected to further increase the number of players and spectators.

The completed first stage of the redevelopment at HBF Arena included extra courts and administration offices for the Joondalup Netball Association and an expansion of the western oval with a second rugby field.

Sport and Recreation Minister Mia Davies said the project would transform facilities at HBF Arena to create a multipurpose sporting hub that allowed clubs to grow and prosper.

While the various clubs at HBF Arena will benefit from these new facilities, the project is also providing additional infrastructure for safe and convenient community use.

Thanks to this redevelopment, HBF Arena will continue to be a great meeting point for people of all ages and abilities to enjoy being physically active in Perth’s north.

Additional power supplies, gas, water and sewerage upgrades and extra rainwater drainage will be completed, as well as an extra 356 car bays.

The State Government thanked the City of Joondalup for their support and financial contribution to the project.