The Estadio Azteca is sacred ground in the soccer world. Originally designed by Mexican architect Pedro Ramirez Vazquez over half a century ago, the “Colossus of Saint Ursula,” as it’s locally known, has seen some of the greatest matches in history, and is the only stadium in the world to have hosted two FIFA World Cup Finals.

In 2026, the stadium will host its third FIFA World Cup™ Finals in a joint effort between Mexico, Canada and the U.S.A. In preparation for the event and to welcome back LigaMX as soccer returns, stadium owners Televisa are making a variety of improvements across the entire facility, including relocating the dugout and player benches and constructing a new state-of-the-art canopy.

The first and only time I’ve cried at the end of a soccer match was aged nine during the 1986 World Cup Finals at the Azteca Stadium. Diego Maradona scored for Argentina against England that day, eliminating them from the finals. So, as an Englishman working on this project, it’s been incredible to be involved with a stadium that holds a special place in my heart.

The new Populous-designed dugout and canopy was relocated from the west side of the pitch to the east to accommodate the new camera positions within the bowl. As part of the design, the new players’ bench sits partly beneath pitch level, allowing perfect views of the action for those fans seated directly behind the dugout. 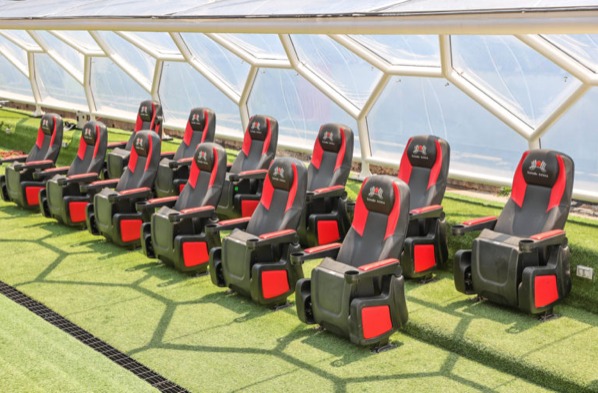 As part of the design, the new players’ bench sits partly beneath pitch level, allowing perfect views of the action for those fans seated directly behind the dugout

The new canopy was inspired by the original tessellation on the Telstar and Azteca soccer balls designed and used during the previous 1970 and 1986 World Cup Finals in Mexico. Populous incorporated the hexagonal and pentagonal patterns into the design of the new dugout canopy that fans across the globe will immediately recognise as belonging to Mexico and the Azteca Stadium.

The manufacturer that provided the PTFE fabric used on the exterior of Allianz Field in Minnesota also produced and installed the ETFE polymer material used to create the new canopy. The air-filled pillows simultaneously protect players and officials from the elements, while providing spectators and television cameras a clear view of the action through the transparent material. 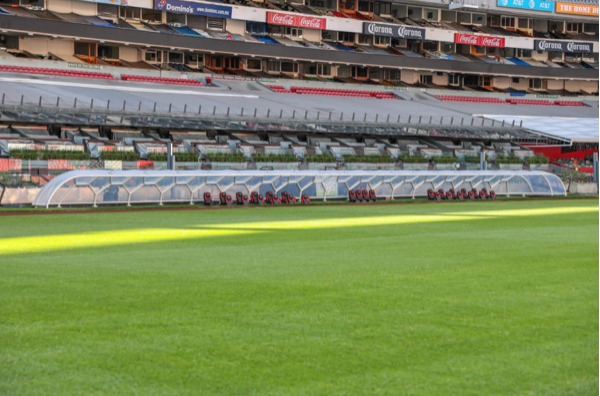 The design of modern dugouts for international soccer must cater to the highest expectations of FIFA and elite players, and the new Azteca dugout is no exception, as Reeves explained:

The new dugout and canopy feature luxury padded car-style sports chairs, data and power points throughout, and programmable LED lighting within the canopy structure that illuminates to celebrate any goal or occasion. It’s truly a one-of-a-kind experience for fans and players alike.

The Estadio Azteca now has the newest and most stylish player dugout facilities in world soccer, befitting this unique and legendary venue.

The 2020 edition of ALSD International – Europe’s leading event for the Premium Seat & Sports Hospitality sector, focused on increasing revenue via new builds, renovations, service expansions & technology – will be a hybrid affair, with the physical event, being hosted at the home of the newly crowned Premier League champions, Liverpool FC’s Anfield Stadium, October 12-13, to be virtualised to ensure no one misses out!

ALSD International 2020 – organised by the Association of Luxury Suite Directors and Sports Venue Business – will feature a high-level conference, an exhibition hall showcasing the latest products, services & solutions, behind-the-scenes tours of Anfield, Goodison Park and M&S Bank Arena, as well as numerous networking events, ensuring optimised opportunities to knowledge-share, network and do business, whether in person or virtually.