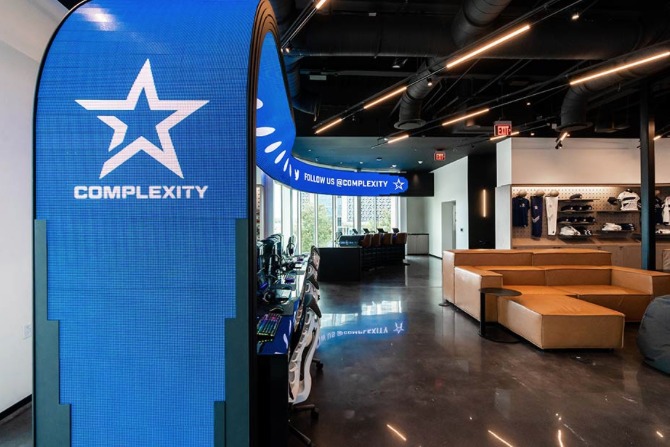 DCL has relied on Daktronics as one of its preferred US-based LED display providers. This project, although a complex engineering feat, ended up being a perfect application for Daktronics’ 3-inch tall, 4mm and 10mm LED modules. We were able to collaborate with their engineering team to resolve a tightly faceted curve that conforms to the various twists and turns of the ribbon while integrating the necessary support structure, power supplies and controllers within a 7-inch deep custom cabinet, fabricated by DCL. Complexity was one project that certainly lived up to its name.

The concept was designed by ICRAVE NY and they turned to DCL and Daktronics to solve the challenge of creating a high-resolution 4mm LED digital solution that appears to float within the architectural environment. This unique design challenge was overcome through deep engineering collaboration of Daktronics engineering team with DCL’s experts in precision design, fabrication and creative installation methods.

The creative use of 4mm quarter-module LED building blocks produced the curved, twisting features facing the interior of the space. This was combined with high-brightness 10mm LED technology on the backside of the curve to optimise resolution and brightness for the various audiences both inside and outside the facility.

We are excited to work with creative designers, technology integrators and fabrication partners that push the boundaries of the perception of what digital media can be in the entertainment industry.

Esports is an emerging market with plenty of opportunity for unique indoor displays and applications. We’re well-positioned with our product family including narrow pixel pitch technology to deliver solutions for these unique applications. This is a fantastic project that highlights our design and engineering capabilities in support of our partners at DCL and we’re proud to be a part of it.

The outward-facing section can be seen through the windows by passersby while the inside can show the same or differing content to appeal to a different audience based on the time of day and event needs. 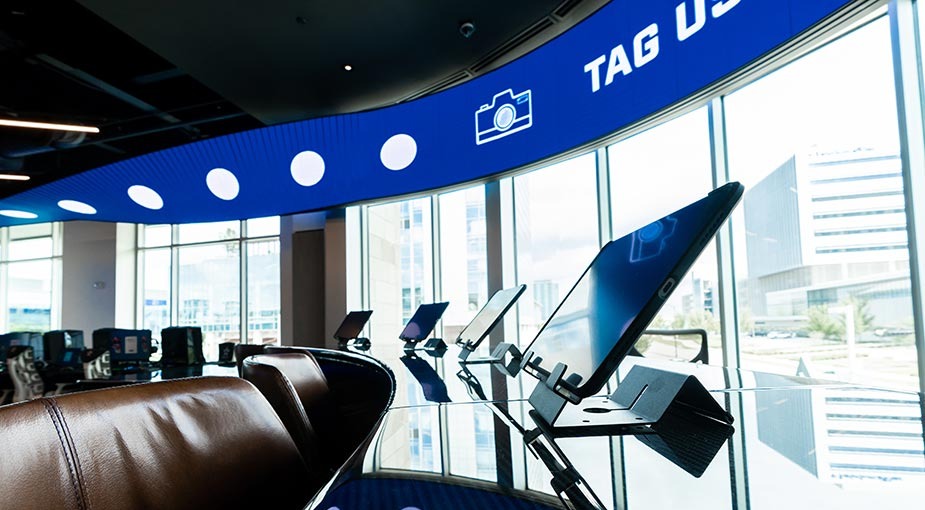 The concept for Complexity’s esports training venue was designed by ICRAVE NY, who turned to DCL and Daktronics to solve the challenge of creating a high-resolution 4mm LED digital solution that appears to float within the architectural environment

Established in 2003, Complexity is one of America’s premier and longest standing esports organisations. Over the past 16 years, Complexity has won over 140 championships in nearly 30 games. In 2017, founder and current CEO, Jason Lake, made history by welcoming Dallas Cowboys owner, Jerry Jones, and investor, John Goff, to the team’s ownership. With unparalleled support and infrastructure from its ownership group, Complexity has created the world’s foremost operations centre and training facilities. Complexity’s player-first mentality, passion, professionalism and innovation have led them to be recognised as a global leader in modern esports.

DCL (Design Communications Ltd) is an award-winning manufacturer of specialty architectural elements, custom signage and integrated digital media for the built environment. With people, experience, and knowledge, DCL partners with architects and designers to provide innovative solutions for notable projects worldwide. DCL’s commitment to its client’s vision, the design process, and consistently delivering an unparalleled product and experience is its greatest success.

Daktronics helps its customers to impact their audiences throughout the world with large-format LED video displays, message displays, scoreboards, digital billboards, audio systems and control systems in sport, business and transportation applications. Founded in 1968 as a USA-based manufacturing company, Daktronics has grown into the world leader in audiovisual systems and implementation with offices around the globe. 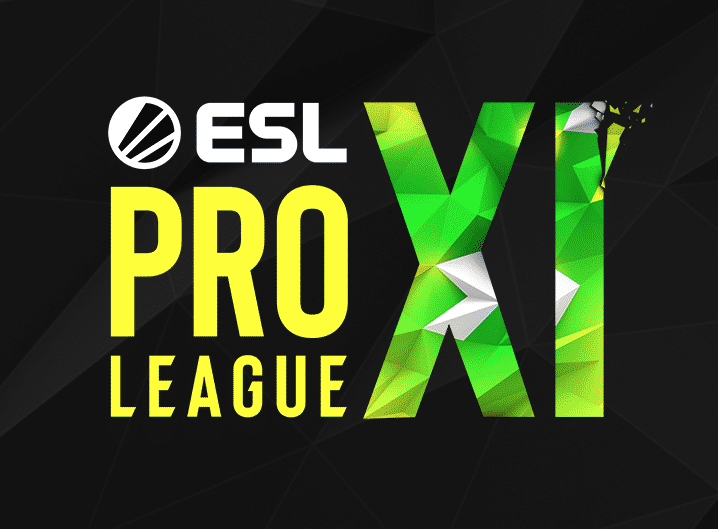 In other esports news, a groundbreaking new agreement between leading CS:GO teams, ESL and DreamHack will govern the setup of Pro League and share of revenues and profits from ESL’s Pro Tour competitions. The teams, representing the top level of professional CS:GO, will also become majority stakeholders in the league with a long-term slot for participation. By partnering with the leading CS:GO teams, the new agreement further establishes the ESL Pro Tour as one of the most valuable properties in the global business of esports.

The new agreement – informally dubbed ‘The Louvre Agreement’ – was signed by Astralis, Complexity, Evil Geniuses, ENCE, FaZe Clan, Fnatic, G2 Esports, Mousesports, Natus Vincere, Ninjas in Pyjamas, Team Liquid, Team Vitality, 100 Thieves and ESL following a meeting in Paris in January 2020. Between them, the signatories of the agreement have won 28 ESL and DreamHack Masters-level competitions and two Intel® Grand Slams in the last four years and represent all of the top 10 ranked teams in the world.

The agreement establishes a deep partnership between ESL, DreamHack and the partner teams, and introduces:

● ESL Pro League being transformed into a new league with a single global division starting in its 11th season
● Teams are majority stakeholders in the league and have a key role in its strategic decision making process
● Revenue share for teams and players from ESL’s Pro Tour competitions, including ESL One Cologne powered by Intel® and Intel® Extreme Masters Katowice.

It has been a long-time ambition for us to be a part of and contribute to a more structured CS:GO scene, giving players, teams and tournament organizers a stronger foundation. This industry-defining agreement is hugely significant in the history of our game, and we’re proud to be part of it.

This agreement is a huge step forward for us on the path to sustainability in Counter-Strike. This league will provide the highest level of competitive play with the best teams in the world, which is always where Fnatic should be. ESL supported professional Counter-Strike since the very beginning and we’re excited to continue pushing CS:GO into the future together.

This group brings together Counter Strike’s biggest stakeholders, united by a common vision that pushes our sport forward. We’re all aiming for the same goal – a sustainable and long-term future that rewards talent and investment in the scene – and we are stronger together as we take this next step.

‘The Louvre Agreement,’ as we have grown fond of calling it, is a clear vote of confidence by the best teams in the world and their players to create the most valuable products. It will build a platform to create stability and growth, without sacrificing the ability for new teams and players to climb to the top.

The agreement elevates signatory teams to key stakeholders in the CS:GO ecosystem and introduces revenue shares for all ESL Pro Tour competitions for the first time. It will further professionalise CS:GO esports by improving team representation, introducing standardised regulations, and revenue sharing for teams and their players.

A new and transformed league built around partner teams

The agreement will transform ESL Pro League, the world’s longest-running professional league for CS:GO, into a 24-team competition with a single global division, moving away from the previous regionalised model.

The founding teams will retain a long-term slot in the league similar to other sports, with remaining teams qualifying on the basis of their world ranking or directly through the Mountain Dew League, the ESL Pro League’s gateway competition.

The ESL Pro Tour comprises ESL and DreamHack CS:GO competitions, including ESL Pro League, DreamHack Masters, ESL One and the IEM. In 2019, these competitions were watched by fans for an estimated 127 million hours and boasted a combined prize pool of more than $4.5 million on top of the $1,000,000 Intel Grand Slam.

The agreement will mean partner teams earn a share of revenues from all competitions in the ESL Pro Tour – including marque tournaments such as IEM Katowice and ESL One Cologne. It will bring structure to the current CS:GO esports ecosystem, establishing the basis on which teams compete in ESL’s competitions.

More information on the agreement and the article written by Andrew Miesner can be found at the official ESL Pro Tour website.

ESL is the world’s largest esports company. Founded in 2000, ESL has been shaping the industry across the most popular video games with numerous online and offline esports competitions. The company operates high profile, branded international leagues and tournaments under the ESL Pro Tour including ESL One, Intel® Extreme Masters, ESL Pro League, and other premier stadium-size tournaments, to more clearly define the path from zero to hero.

ESL also produces the ESL National Championships, grassroots amateur cups, and matchmaking systems, creating a world where everybody can be somebody. With offices all over the world, ESL is leading esports innovation on a global scale through the combination of global ESL competitions, amateur leagues, publisher activations, and more. ESL is a part of MTG, the leading international digital entertainment group. about.eslgaming.com

Pro League is the world’s largest professional league for Counter-Strike: Global Offensive, featuring the best teams from Europe, North America, South America and the Asia-Pacific region. Broadcasted on various platforms and staged in major venues across the globe, Pro League hosts the most widely-watched CS:GO competitions.

The 2020 edition of ALSD International – Europe’s leading event for the Premium Seat & Hospitality sector being hosted by Liverpool Football Club this October – will feature a conference focused on how to increase revenue through new builds, renovations and service expansions, as well as via non-traditional sporting events like esports, in addition to behind-the-scenes venue tours, networking events and an exhibition showcasing the latest products, services and solutions.