Martin Griffiths, Chairman of Ashton Gate, has revealed the latest designs for the proposed 4,000-capacity Sports & Convention Centre next to Ashton Gate Stadium.

It’s really exciting to be able to show the digital fly-through to everyone today. We’ve talked a lot about creating a Sporting Quarter for the city where our football, rugby and basketball teams will all play.

Since first announcing plans back in September 2018, we’ve been busy consulting with as many stakeholders as possible. The reaction and interaction that we’ve had has been really positive and has brought us to the designs we are showing today. There is now more open space and public realm areas along with a reduction in the height of the tallest buildings.

We think that these latest designs are a great step forward and next month on March 24th & 25th, we will hold a public exhibition at the stadium to outline the plans with more detail. This public exhibition will give everyone a chance to view and comment on the plans, which we hope to submit for planning at the end of the summer. 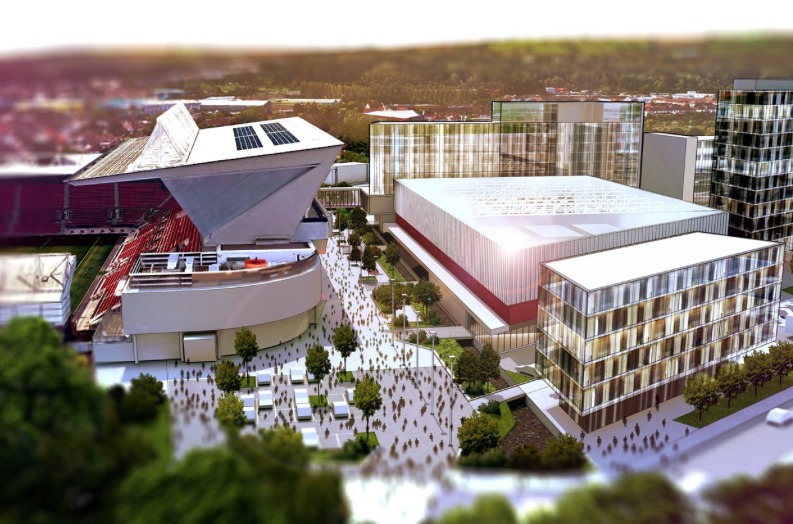 The plans involve giving the Bristol Flyers basketball team, part of the Bristol Sport group, a permanent home at Ashton Gate. The team, which recently made it all the way to the BBL Cup Final at Arena Birmingham and played in front of a record crowd of nearly 10,000 fans; has developed a loyal fan base in the West, with sell-out crowds at their current home of SGS College Arena.

Seeing the vision brought to life with the fly-through is a real step towards it becoming a reality. The BBL Cup final demonstrated the huge support for the club and the appetite for basketball as a sport.

To have this kind of venue here at Ashton Gate would be a game-changer for our programme, will support our future aspirations and secure our long-term sustainability to allow us to grow even further.

A Public Exhibition will take place at Ashton Gate Stadium on Tuesday March 24th and Wednesday 25th March, where more details on the proposed plans will be made available.

Check out the fly-through video by clicking here.

Top executives from Ashton Gate are regular faces at ALSD International, Europe’s leading event for the Premium Seat & Hospitality sector. The 2020 edition is being held at Liverpool FC’s iconic Anfield stadium this October 12-13 and will include a high-level conference, an exhibition hall showcasing the latest products, services and solutions, behind-the-scenes tours of Everton’s Goodison Park and M&S Bank Arena, as well as numerous networking events.