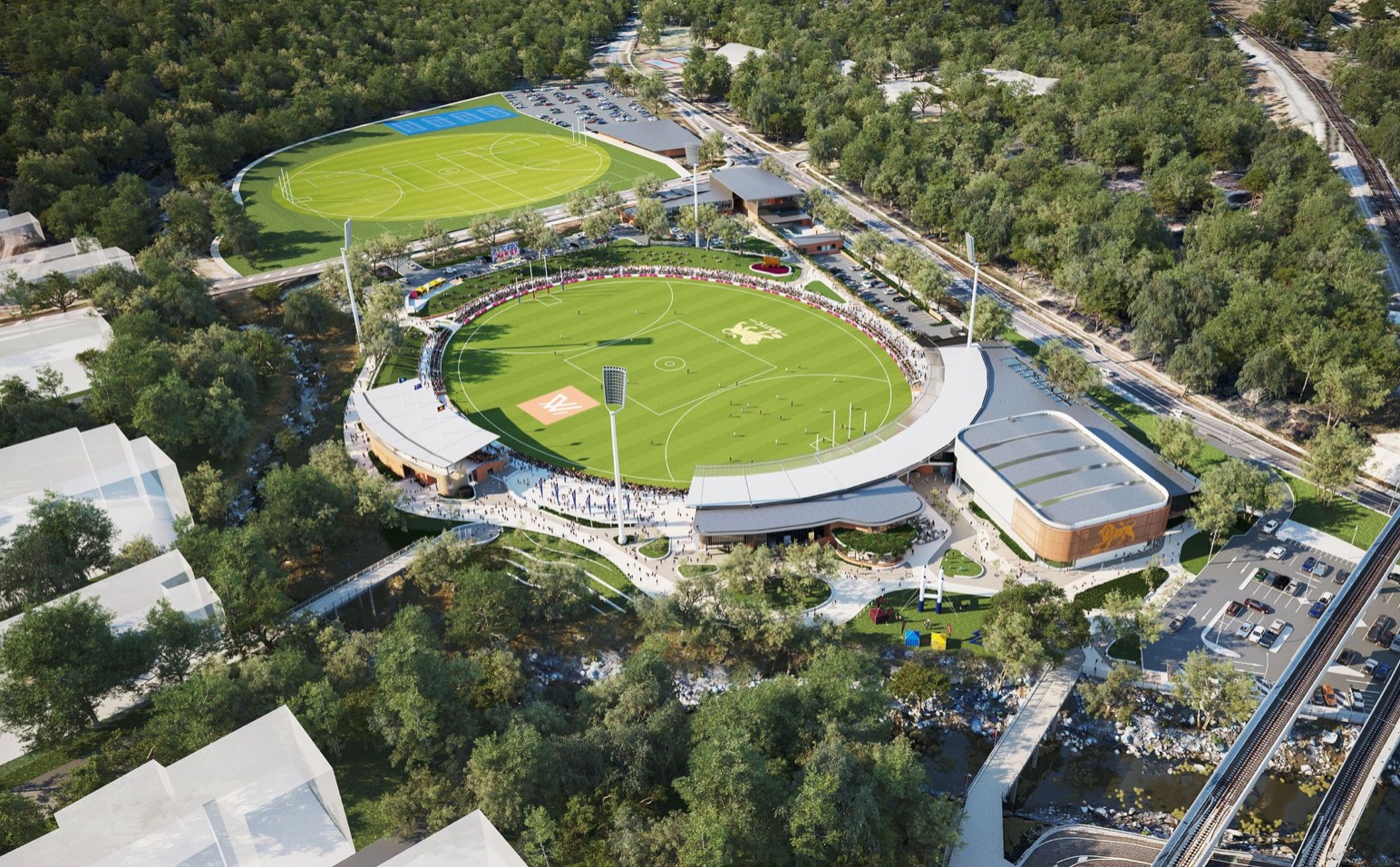 The Brisbane Lions have shared the final renders of The Reserve Community Arena at Springfield, before the Club commences construction of the facility in March.

By Spring 2021, the Lions will have officially moved their training and administration headquarters to The Reserve, in time for their first AFLW matches at the arena in 2022.

The latest renders depict the final design of the Lions new home in rich detail. The southern arena plaza that supporters will cross upon arrival from Springfield Central train station features an events lawn to host Lion Park activations and an indoor training field. The gardens will showcase the best of Brisbane’s subtropical flora, including species that flower in Lions colours throughout the season.

Spectator seating in the grandstand, hill areas and tiers around the oval have been designed to bring members and supporters as close to the footy as possible. A flat oval surface will greatly-enhance fence line views of the action. A mix of seating and standing options and cover will improve the Lions match experiences in hot and wet weather.

Construction on the training and administration facility is scheduled to start in March, with completion expected by November 2021. 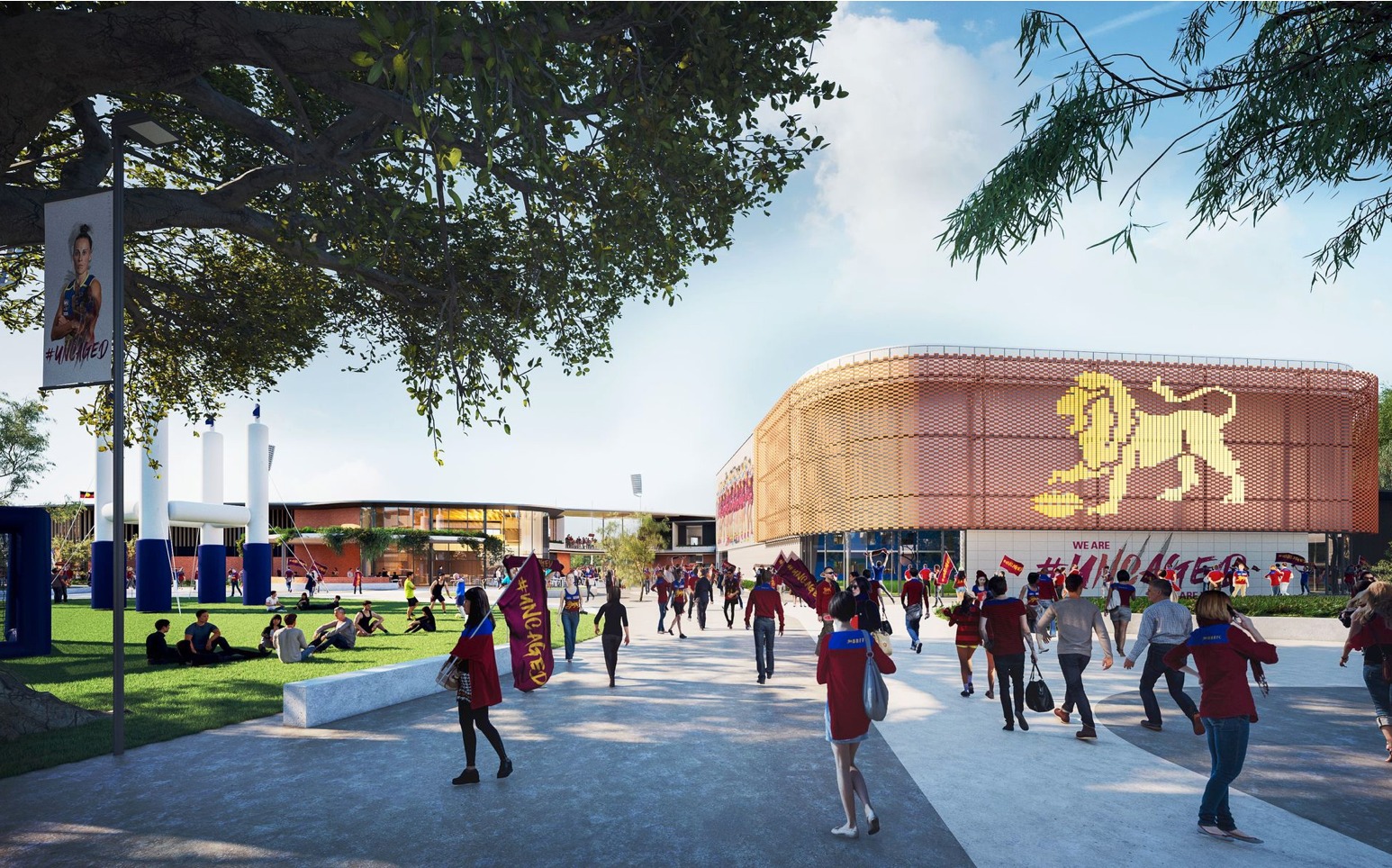 The latest renders of The Reserve depict the final design of the Lions new home in rich detail. The southern arena plaza that supporters will cross upon arrival from Springfield Central train station features an events lawn to host Lion Park activations and an indoor training field

General Manager of Infrastructure, Strategy and Government Relations at the Lions, Jake Anson, was delighted to share the images with supporters, after months of discussions around the design process:

The past year has seen countless hours invested into selecting consultants and contractors, finishing our design, formalising our funding agreements and completing our lease and development approvals with Council.

A new live-stream video on our Club website has been launched which shows fans our progress to date and will allow them to track our construction progress. Those earthworks will finish in the next four weeks with building construction to commence as soon as the site is ready.

We invite interested fans to drive by the site and perhaps wrap in a visit to some of Springfield’s other attractions, which include the wonderful Orion Lagoon and Robelle Domain family precincts, Orion Shopping Centre which continues to expand and one of Queensland’s best public-access golf courses at Brookwater.

The Lions will host a number of events over the year ahead that provide construction updates and launch the public phase of our fundraising campaign, which will focus on raising the final funds for our new home with opportunities for our supporters to be a part of our Lions Legacy.

The Reserve will be owned by Ipswich City Council and leased to the Brisbane Lions Football Club. ICC and the Lions have agreed a tenure term of 99-years, with the Club to project manage preparatory earthworks and construction of its new home at the site.

The Club has secured funding from Ipswich City Council, the Queensland and Commonwealth Governments and the AFL, with a fundraising campaign having been launched to secure the final funds for the facility fit-out.

ALSD International, Europe’s leading event and 365 community for the Premium/Club/VIP Seat & Hospitality sector, is being held at Liverpool FC’s Anfield stadium this October 12-13.