Council votes in favour of new stadium for Cagliari Calcio

Cagliari City Council has voted in favour of a new local plan that will see Cagliari Calcio’s new stadium finally built. Should everything go to plan, the project could see groundbreaking for the 25,200-seat stadium in 2021, with delivery slated for 2024.

Cagliari City Council voted in favour of the local plan for Sant’Elia and San Bartolomeo districts, which includes the long-awaited new stadium for the Italian Serie A side, Cagliari Calico, based in Sardinia.

This means the club should now be able to commence with the building of a new 25,200-seat stadium – expandable to 30,000 – on the site of the Stadio Sant’Elia, their former home ground.

After adoption of the plan in the city council there is 60 days for final approval. After this period, the club will be able to start the final executive planning.

The updated, final design is to be presented to the conference of services, which should complete its evaluation before the end of 2020. Once approval is given, tenders can be announced, followed by demolition and groundbreaking for the new stadium. 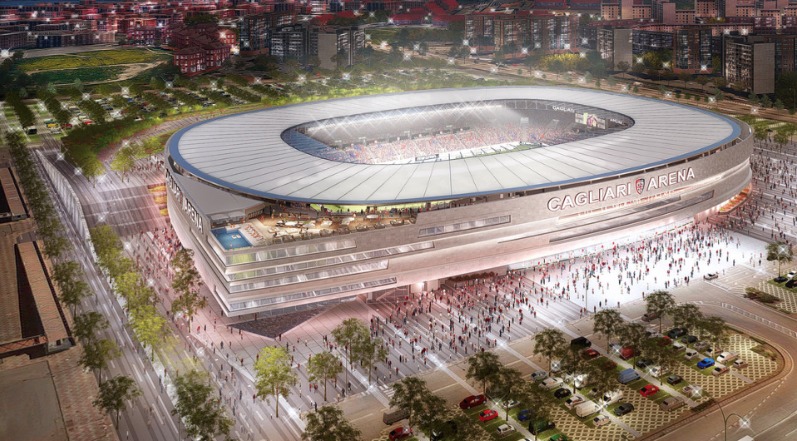 Sportium was announced as the winning consortium for the design of the New Sant’Elia stadium back in 2018. Image, courtesy: MANICA Architecture

If the project commences in 2021, it is expected that construction should conclude in 2024. This represents a major – but expected – delay compared to initial hopes of Cagliari Calcio a few years back, when it was hoped that the new stadium could be ready by 2021.

The approved local plan set guidelines that forced some design changes from the original plans. For example, when the plans were first presented in 2018, the design included a 14,700sqm retail centre attached to the side of the stadium. Although this will retain its size in the amended plan, it will be separate from the stadium and split into four interconnected buildings.

In the meantime, Cagliari will continue playing at the temporary Sardegna Arena, which the club has called ‘home’ since the 2017-18 season, after the Stadio Sant’Elia was closed in readiness for the new stadium project.

Sportium was announced as the winning consortium for the design of the New Sant’ Elia stadium back in May 2018. Sportium, a predominantly Italian-based consortium of partners, includes Projetto CMR, iDeas, B & L Real Estate and MANICA Architecture.