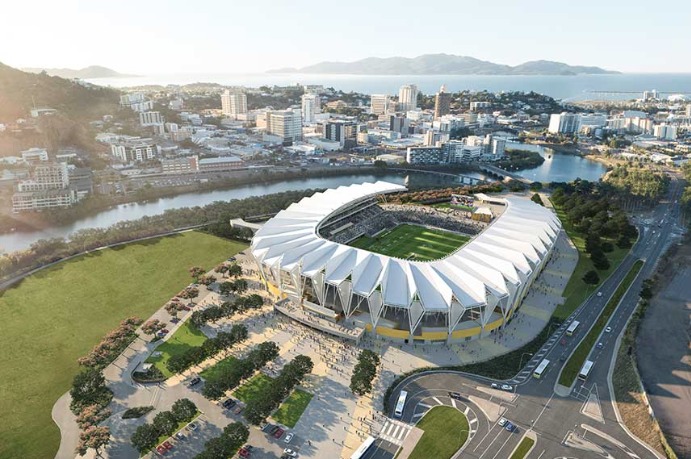 Townsville’s new North Queensland Stadium has reached a major milestone, with the installation of the first of 25,000 seats.

Premier Annastacia Palaszczuk was joined by Johnathan Thurston to help install the first seat, alongside Queensland Minister for Housing and Public Works Mick de Brenni, as construction on the A$290m project reaches its peak.

The project remains on budget and on track with the main stadium build works now more than 75 per cent complete, and half of the trusses that will make up the iconic roof structure now installed.

Visiting the stadium while in Townsville for Regional Parliament, the Premier said installing the first seats is an exciting moment and brings the project one step closer to being ready to host the Sir Elton John concert and the 2020 National Rugby League (NRL) Premiership Season next year.

Premier Palaszczuk said at an event to mark the milestone:

I can’t wait for the people of North Queensland and visitors to the region to be able to sit here in these seats and enjoy the sporting, cultural and community events that will be hosted in this world-class stadium. We said we would build this stadium and that’s what we’re doing, it’s been incredible to watch it rise from the ground into what you see today. It’s infrastructure projects like this, that create jobs and support the local economy and that’s what my government is committed to, not just here in Townsville but right across the state.

Australian Minister for Population, Cities and Urban Infrastructure, Alan Tudge, said the stadium would make a significant difference to the Townsville community:

The Morrison Government is proud it can help build this world-class stadium, which will be enjoyed by the people of Townsville for decades to come.

Premier Palaszczuk also paid tribute to the largely local workforce for their hard work in making the stadium a reality:

With construction now at its peak, local subcontractors have already completed almost 92 per cent of construction hours, exceeding the contractor’s target of 80 per cent. Over 88 per cent of workers inducted to the site live in North Queensland, and some 481 local businesses have also been engaged through the extended supply chain, supporting even more North Queensland jobs and creating valuable opportunities for local businesses to upskill their teams.

Managing contractor Watpac has engaged Camatic Seating; the only Australian company that build the world-class fit-fit-for purpose seats and have experience in supplying similar seating to major stadiums around the country like Robina, Rod Laver Arena and the MCG. (NB: Camatic Seating will be showcasing some of their latest products and projects at next month’s ALSD International event, which will feature a stellar lineup of some 50+ industry expert speakers from across Europe and North America. Some 150+ delegates from clubs & teams, stadia & arenas, sports & entertainment venues, architecture & design firms, leagues & federations, producers & suppliers, etc., are already confirmed, with more registering every day! Find Camatic on exhibition stand #31.) 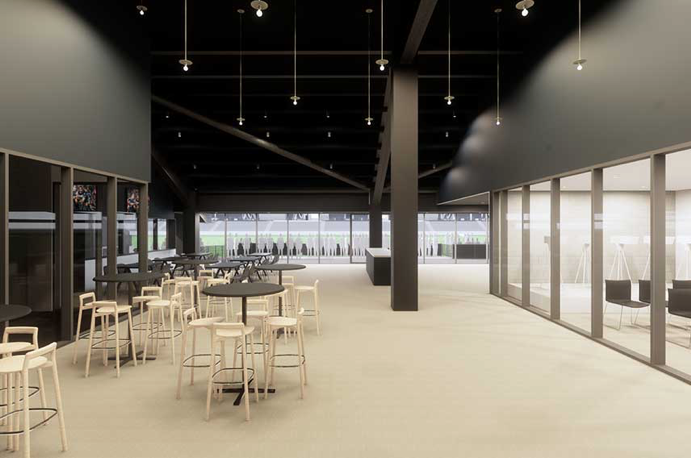 Minister for Housing and Public Works, Mick de Brenni said the North Queensland Stadium was on track to be a world-class venue:

Just as the final match at 1300SMILES was a nail biter, there’s going to be plenty of edge-of-your-seat action at the new stadium. We’ve made sure that quality is a priority using a UV-tested, marine-grade vinyl, to ensure the new seats withstand the test of time under the tropical sun.

Member for Townsville Scott Stewart said he was pleased that the seating design would be fitted to pre-fabricated seating platforms manufactured in Townsville by local company Jackson Semler:

This is a stadium built by North Queenslanders for North Queenslanders. Jackson Semler have previously worked on the state-of-the-art Townsville Disaster Coordination Centre so we know that fans at the upcoming Elton John concert will be in safe hands.

Mr Thompson said the number of seats in the stadium will make it well suited to hosting blockbuster events like the Queensland derby:

The new stadium will have 25,000 seats, which is 7,000 more than at the 1300SMILES Stadium. That means 7,000 more people will be able to get a seat to watch big matches like the Cowboys versus the Broncos. 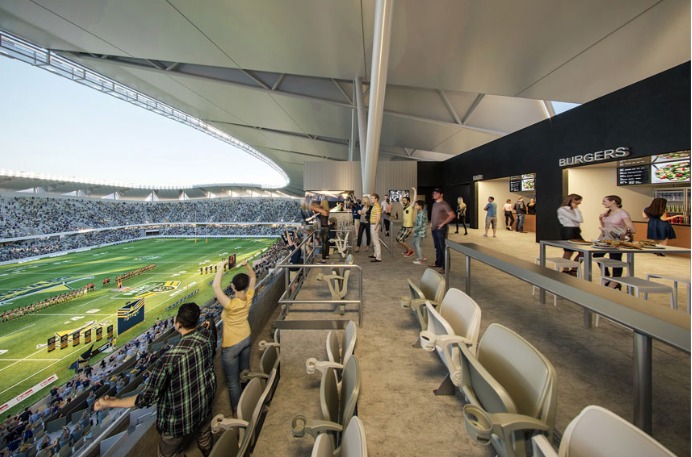 Townsville Mayor Jenny Hill said fans and visitors will have no doubt where they were thanks to the North Queensland Stadium’s iconic design:

Whether you’re inside or out the pandanus theme continues throughout the stadium as seating is distributed in an angular pattern that complements the stadium’s spectacular roof.

Director Adam Fisher said his company continues to work closely with Allunga Exposure Laboratory, located just outside of Townsville, to test all materials it places in external environments:

Allunga understands the toll that the strong Queensland sun can take on outdoor fixtures, so it makes sense to partner with them for our testing. These seats are renowned for their comfort and we’re proud to be bringing this high-quality product to the stadium, in customised colours and arrangement.

The stadium forms part of the Townsville City Deal signed in December 2016. 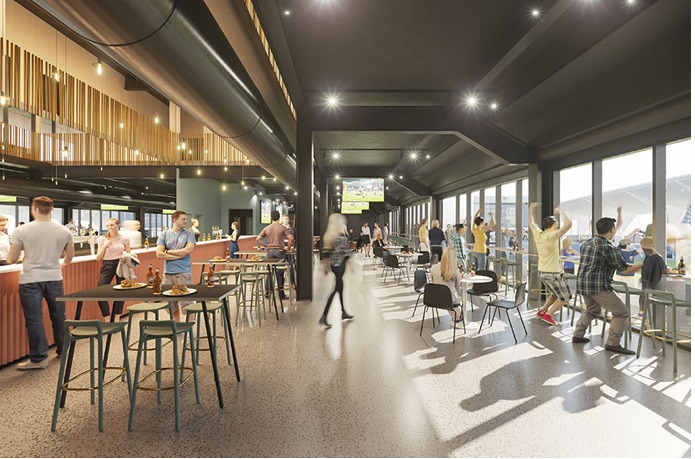 Camatic Seating is one of 40-plus entities that will be exhibiting/sponsoring next month’s ALSD International conference and exhibition – the one and only event outside of North America dedicated to the Premium/VIP/Club Seat & Hospitality sector. The event is taking place at the 82,300-seat Croke Park Stadium in Dublin, where experts from across Europe and North America will be providing insights on how to increase revenues through new builds, renovations and service expansions, as well as via the latest F&B and technology offerings.