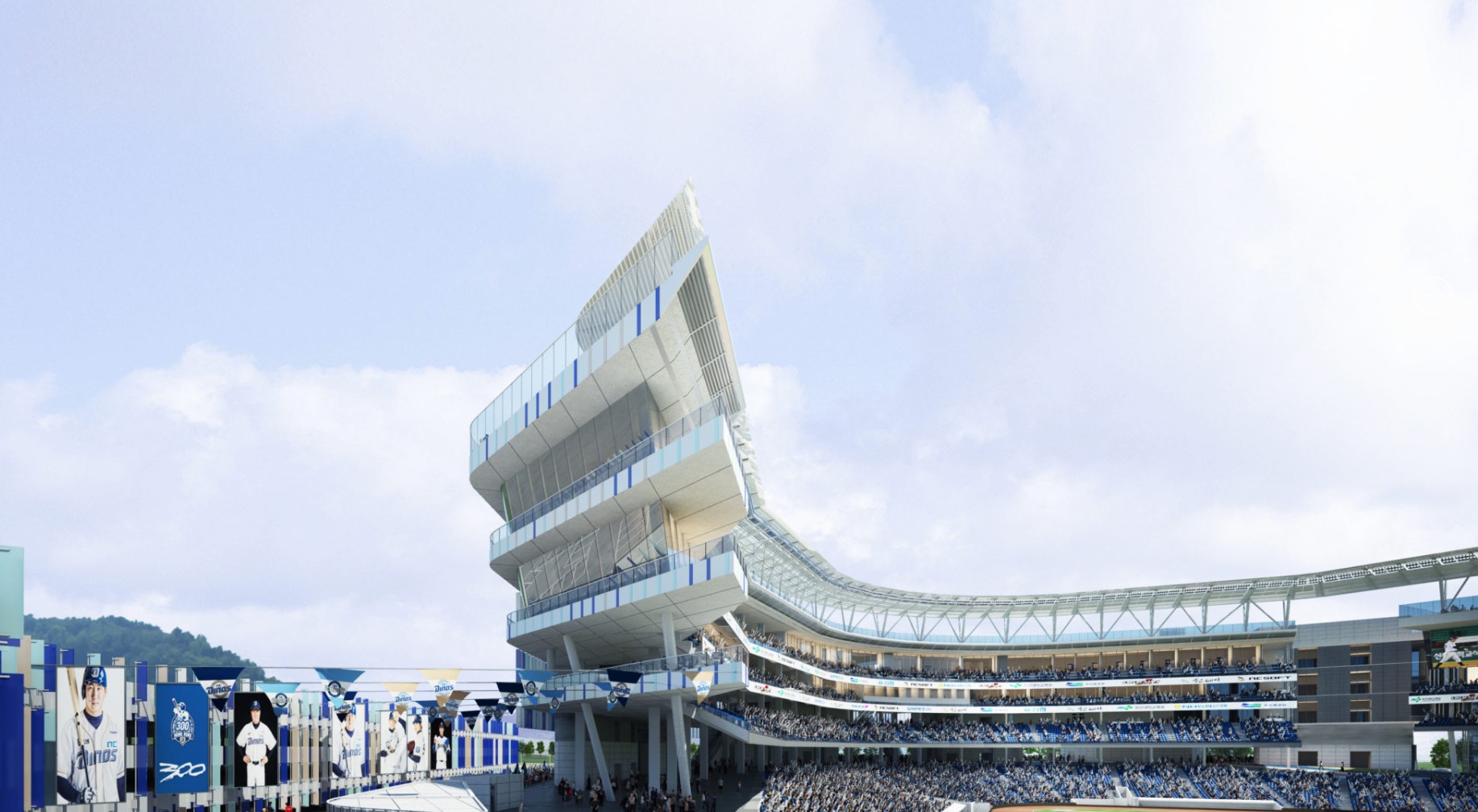 Designed to be active all year round, NC Dinos ballpark is a major breakthrough for sport and entertainment venues in South Korea. It is the first baseball stadium to have 360° views to the field and integrate with the park outside. As part of the innovative design, all of the commercial spaces in the stadium including the restaurants, fan retail shop, function room and café are operational during the off-season.

Populous Senior Principal, Andrew James, spoke about the design as the venue hosted its first match between the home team, NC Dinos and Samsung, on Saturday March 23:

Drawing on global trends and creating new traditions for fans in Korea, the design of NC Dinos is influenced by the baseball culture in America where spectators enjoy the opportunity to get outside and experience a more traditional ‘ball park’ atmosphere.

But more than that, ballparks of today and tomorrow connect with their surroundings, instead of closing themselves off. Our design opens up the venue to embrace its surrounding precinct and offers green spaces and facilities that can be enjoyed by the wider community any day of the year.

Surrounded by expansive recreational areas including play spaces for kids, the new precinct provides an inclusive environment for the broader public, making a small but significant addition to the city of Changwon. 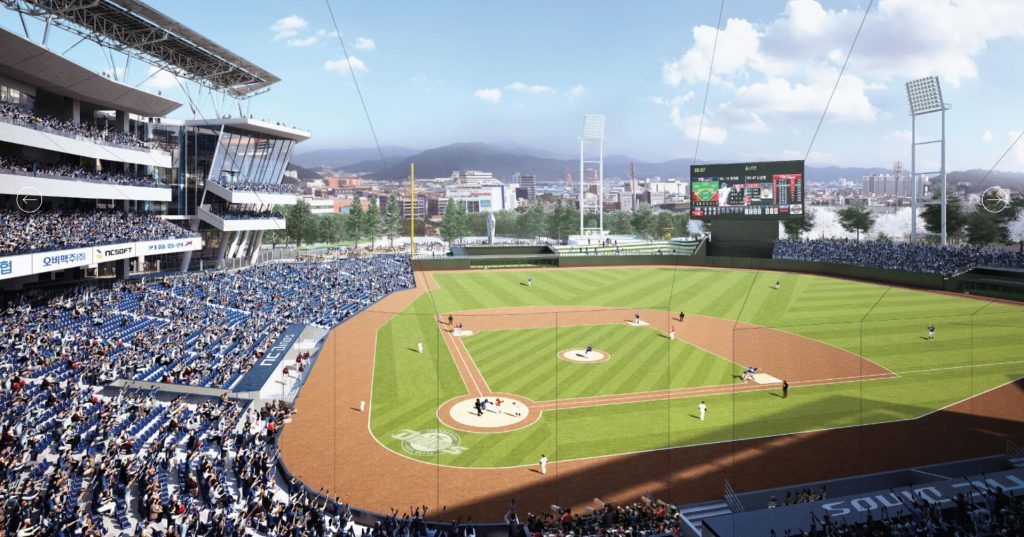 By sinking the pitch at Changwon NC Dinos Park, the main concourse sits at ground level, allowing for direct wheelchair and pram access. Casual seating areas around the outfield, with grass berms and timber terraces, create a flexible, relaxed space for families and fans

Another key feature of Populous’ design is the roof top gardens stretching the length of the grandstand, which take their inspiration from the High Line in Manhattan, a park built on an elevated section of a disused New York Central Railroad.

Focused on creating the best overall environment for players, local fans and families, Changwon NC Dinos Park – home ground for top professional baseball team, NC Dinos – delivers a premium fan experience. The design is innovative, inclusive and immersive, providing great spaces and views for every fan. Drawing upon their broad expertise in American baseball, Populous has created the platform for ‘new’ traditions for baseball fans in Korea, such as third inning strolls where fans leave their seat and walk around the stadium while still connecting with the action. 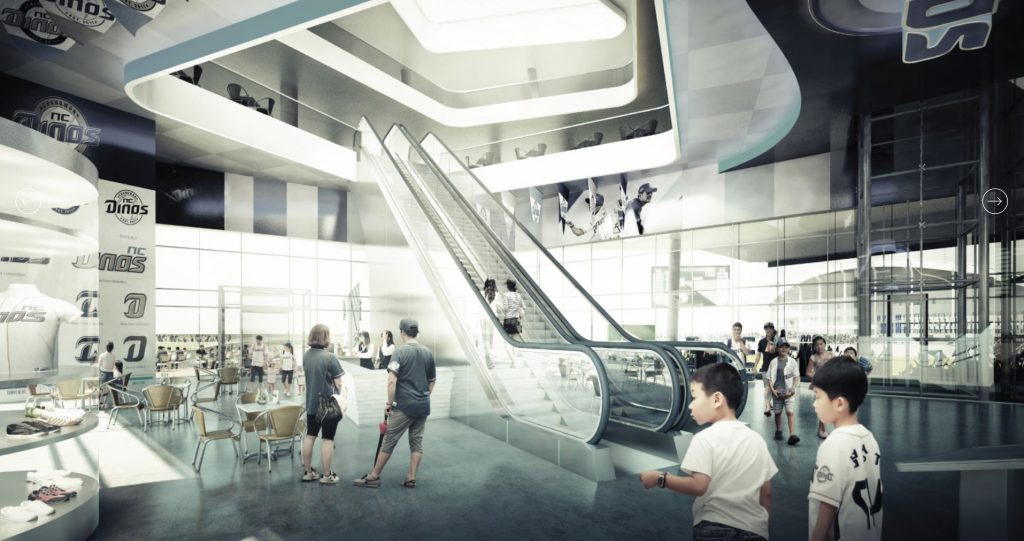 The ballpark’s commercial facilities are located next to the main stand, directly overlooking the pitch, offering game views from the café and museum, meaning  fans can purchase food and souvenirs without missing any of the on-field action

By sinking the pitch, the main concourse sits at ground level, allowing for direct wheelchair and pram access. Casual seating areas around the outfield, with grass berms and timber terraces, create a flexible, relaxed space for families and fans. The commercial facilities next to the main stand directly overlook the pitch and offer game views from the café and museum, allowing fans to purchase food and souvenirs while watching the action in real time.

The solar panels on the rooftop provides shade for users and a sustainable source of energy for the stadium. The garden is able to be enjoyed throughout the year and provides an alternative viewing area during game day.

Until yesterday, the old baseball stadium was only for the fans of baseball. From today, the ballpark is for everyone living in and visiting the city. It is a park for everyone.

Taking inspiration from U.S. Spring Training Fields, NC Dinos’ open air design invites the public to watch the players train, to smell the turf and build upon the stadium atmosphere on match day. This encourages a valuable sense of inclusion and community, creating a place for everyone in the city, not just fans of baseball.

Situated between the existing athletics venue, that will now be home to the second tier team, and the residential and commercial precinct, Changwon NC Dinos Park is designed to be a part of the urban landscape. 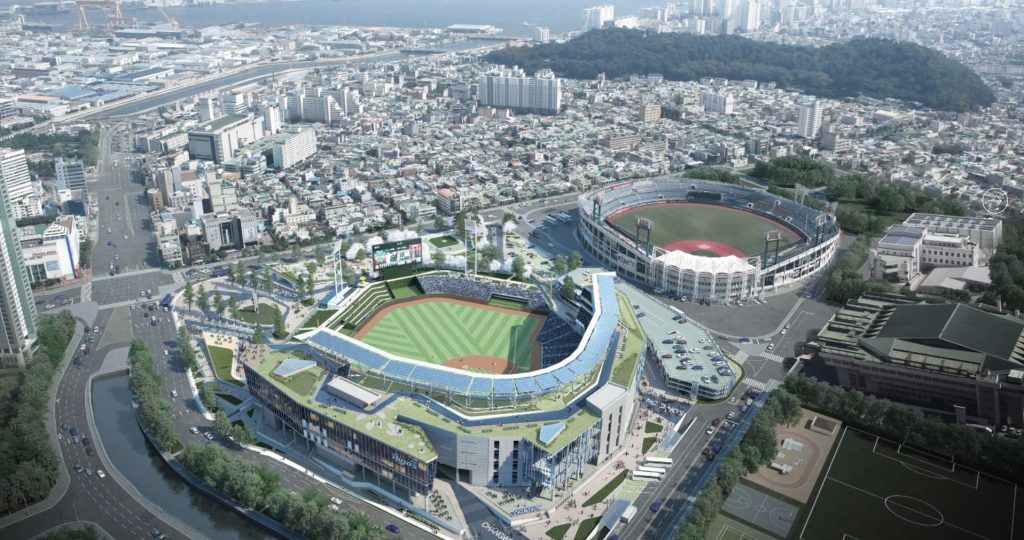 Situated between the existing athletics venue, that will now be home to the second tier team, and the residential and commercial precinct, Changwon NC Dinos Park is designed to be a part of the urban landscape

Populous has worked on over 130 new ballpark and major renovations including 20 Major League Ballparks from Yankee Stadium to Oriole Park. For more than 35 years, Populous has reconnected the game of baseball with its urban settings throughout the world.