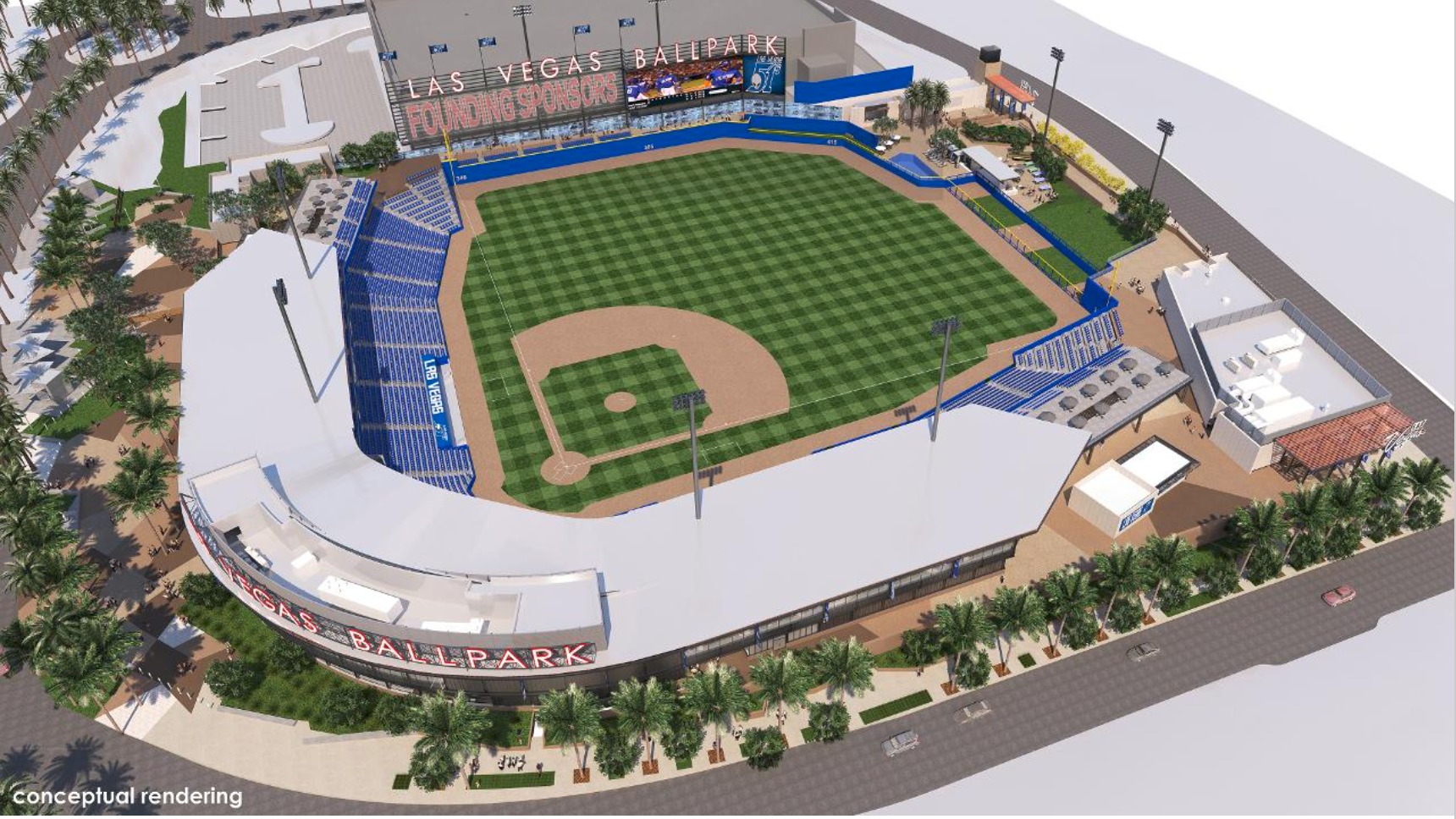 The Howard Hughes Corporation® has announced the selection of Professional Sports Catering as the official hospitality partner and Cox Business as the Technology Sponsor for the new Las Vegas Ballpark.

The Howard Hughes Corporation®, developer and owner of the Las Vegas Aviators®, has confirmed Professional Sports Catering (PSC), the leader in food and beverage for Minor League Baseball (MiLB) ballparks across the country, will offer fans an array of innovative culinary options throughout the highly anticipated new stadium, while Cox Business will  provide internet, managed Wi-Fi, distributed antenna system (DAS), and video-voice services to create a connected guest experience.

In advance of the Las Vegas Ballpark opening, set to open in Summerlin this spring, PSC’s culinary team has begun to identify local restaurateurs to partner with at the ballpark and are studying the culinary trends and preferences that define Las Vegas dining.

There has never been a more exciting time to be a sports fan in Las Vegas. As we began to imagine the future home of the Las Vegas Aviators, we knew we had to match that excitement with a hospitality program every bit as ambitious as the rest of the ballpark. Professional Sports Catering has crafted the best food and beverage experiences at ballparks throughout Minor League Baseball, and we’re excited to bring their expertise in delivering an incredible game day experience.

The partnership announcement comes on the heels of the unveiling of the Las Vegas Aviators as the baseball team’s new name, bringing further momentum to the Minor League Baseball team’s exciting next chapter. Additionally, the Las Vegas Aviators recently announced a new two-year Player Development Contract (PDC) with the Oakland A’s in Major League Baseball.

At Professional Sports Catering we live and breathe Minor League Baseball, but when you’re talking about a market like Las Vegas and a team like the Aviators, we know that everything we do has to be Major League quality. The Aviators are building an incredible culture of focusing on the fan experience, from the moment guests enter the gates through the end of the game, and we’re excited to take on the challenge of showcasing the best flavors of Las Vegas, along with ballpark classics, to fans of all ages.

With this partnership, PSC’s parent company, Levy, adds to its strong portfolio in the Las Vegas area that includes T-Mobile Arena and Las Vegas Motor Speedway. This regional strength allows PSC to collaborate with local culinary and beverage leaders across venues, tapping into their expertise and bringing the best of the market forward. 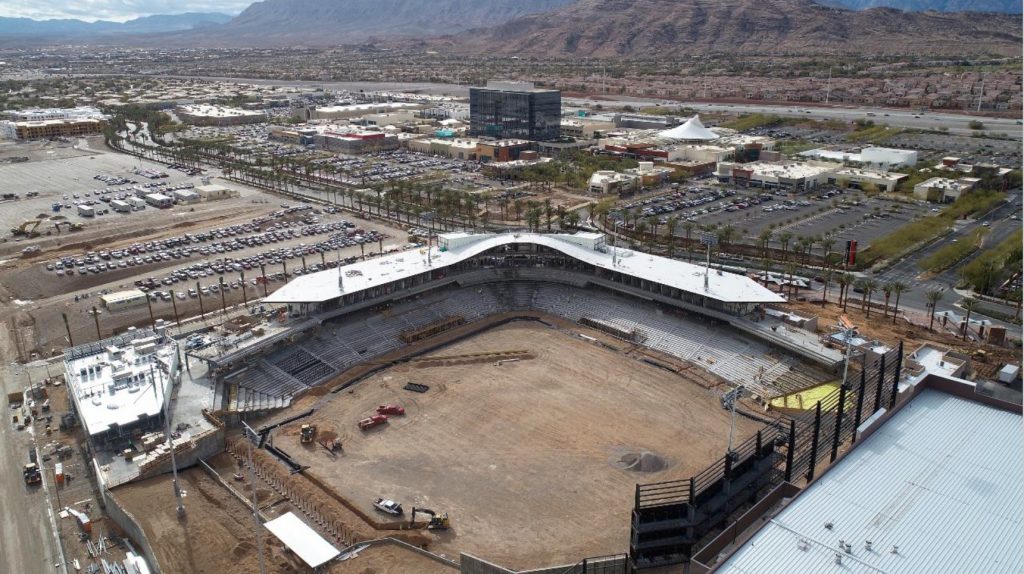 Cox Business was also confirmed as the Technology Sponsor of the new 10,000-capacity stadium, under a multi-year partnership agreement.

Currently under construction at Downtown Summerlin®, Las Vegas Ballpark is the future home of the Las Vegas Aviators®, the city’s professional Triple-A baseball team of the Pacific Coast League (PCL) and affiliate of the Oakland Athletics.

As the Technology Sponsor, Cox Business will be the exclusive technology solutions provider for Las Vegas Ballpark, supporting both operational functions and guest-facing technology.

We value our relationship with the Las Vegas Convention and Visitors Authority and The Howard Hughes Corporation, so we’re understandably very excited about this newest affiliation as Technology Sponsor at Las Vegas Ballpark. As sports fans, we look forward to getting behind the Aviators during the team’s first season at its new stadium and helping to create a premier fan experience at the city’s new, first-class baseball venue.

Cox Business’ reputation as an industry-leading provider of technology products and solutions is well-known and well-deserved. Through this partnership, Cox Business will provide a broad range of services and products that will not only deliver the best possible stadium experience for fans, but also enhance the organization’s technological capabilities.

The company will also install a distributed antenna system designed to enhance wireless coverage provided by the major carriers within the ballpark. In addition, Cox Business will provide technical support to the on-site ballpark technology team for all major events and ensure seamless operation of all Cox technologies.

Relying in part on its Hospitality Network division to implement the advanced technologies at the new baseball stadium, Cox Business has years’ worth of large-scale technology deployments at arenas, convention areas and meeting facilities.

The Howard Hughes Corporation is committed to building a top-tier stadium that will be a first-class venue for both the team and the community. In addition to being home to the Las Vegas Aviators, Las Vegas Ballpark will host other civic, community and sporting events holding a total capacity of 10,000. As the second major sports facility in Downtown Summerlin®, the new stadium will establish the community’s urban core as a vibrant sports and entertainment hub.

About The Howard Hughes Corporation

The Howard Hughes Corporation owns, manages and develops commercial, residential and mixed-use real estate throughout the U.S. Its award-winning assets include the country’s preeminent portfolio of master planned communities, as well as operating properties and development opportunities including: The Seaport District in New York; Columbia, Maryland; The Woodlands®, The Woodlands Hills, and Bridgeland® in the Greater Houston, Texas area; Summerlin®, Las Vegas; and Ward Village® in Honolulu, Hawai’i.

The Howard Hughes Corporation’s portfolio is strategically positioned to meet and accelerate development based on market demand, resulting in one of the strongest real estate platforms in the country. Dedicated to innovative place making, the company is recognised for its ongoing commitment to design excellence and to the cultural life of its communities. The Howard Hughes Corporation is traded on the New York Stock Exchange as HHC.