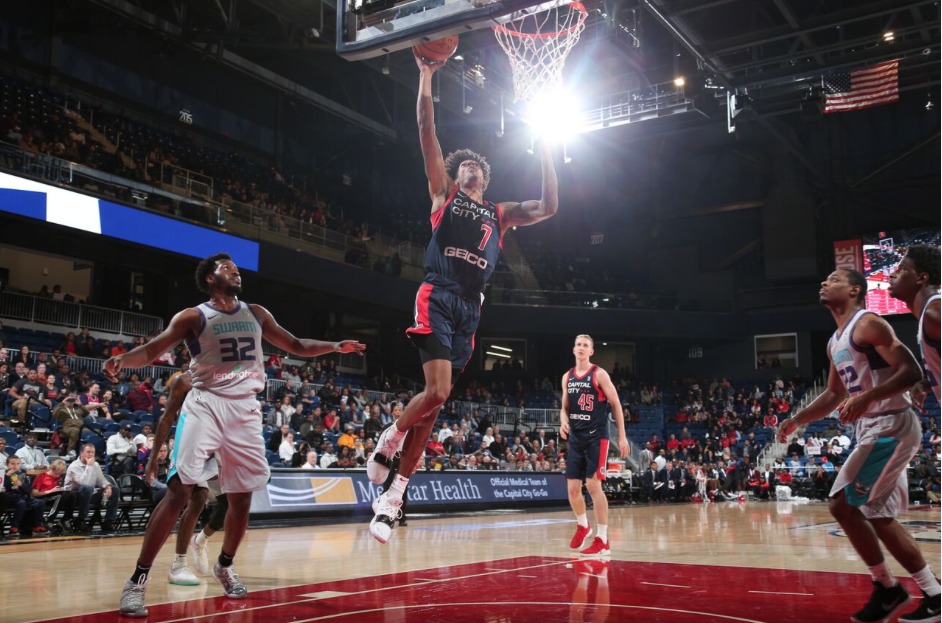 Within three months of its opening in September, the Entertainment and Sports Arena (ESA) is doing exactly what it was designed to do – provide a maximum of entertainment options for the Congress Heights and Washington DC areas. 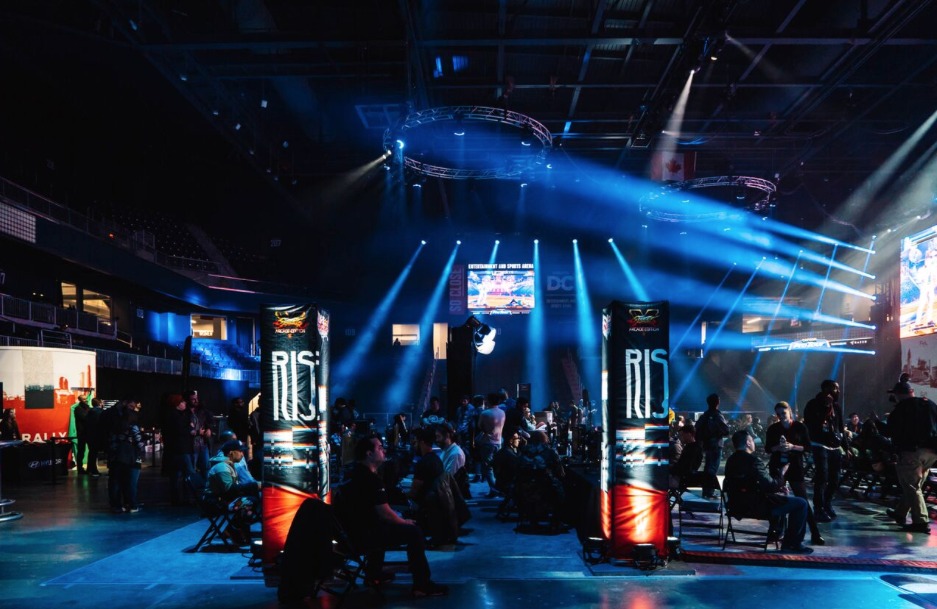 Owned and operated by EventsDC, the city’s convention and sports authority, it’s the only facility of its kind, with three associated basketball teams calling it ‘home’. The 114,000sqft building serves as a practice/training facility for the NBA Washington Wizards, and an arena (home court) and practice/training facility for the WNBA Washington Mystics. The NBA-G League Development team associated with the Wizards, the Capital City Go-Go, also trains and plays here.

Designed by ROSSETTI with maximum flexibility, the ESA facilitates quick change over between events and excellent views for both sports and entertainment. During concerts, black out curtains are available to screen sound and light. The equipment grid is similar to those found in larger arenas. Additional power is provided to accommodate eSports events. Local architect Michael Marshall Design is the Associate Architect.

Serving a capacity of 4,200, the arena is designed in an open “C” configuration with the stage along the northern length of the building vs. a traditionally designed end-stage. This meets the narrow challenges of the site, and creates a very intimate setting for basketball, concerts and eSports by bringing guests closer to performers than a typical arena of this size. The upper bowl features angled ‘wings,’ providing wider seats with tables in between for a premium seating experience. Retractable seating at ground level expands and contracts for events.

The ESA also has all the guest amenities expected in a larger arena, such as food service and concessions, comfortable seating and wide concourses that are open to the bowl for constant connection to the event. 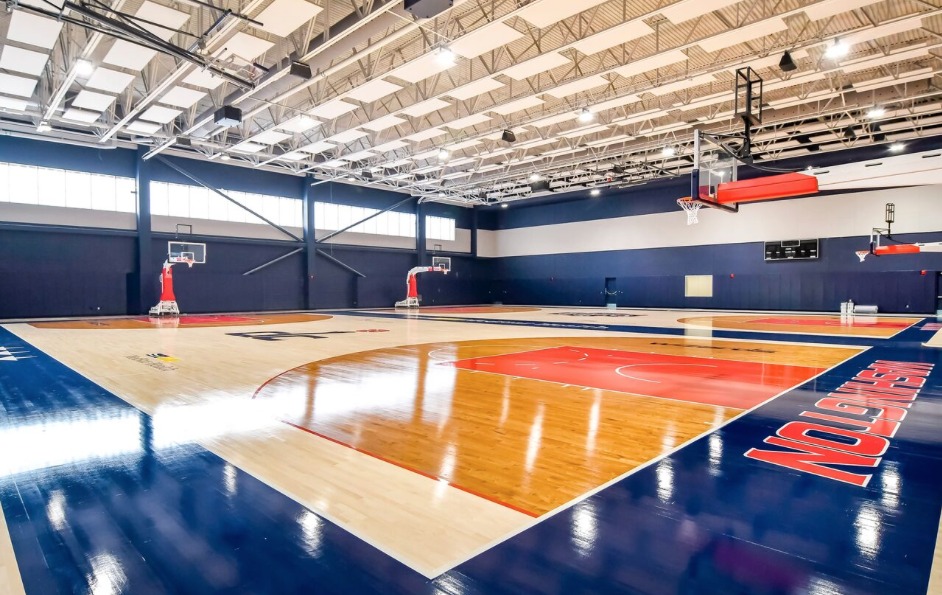 Owned and operated by EventsDC, the ESA is the only facility of its kind, with three associated basketball teams calling it ‘home’. Image: Jay Stearn

While the Entertainment and Sports Arena primarily showcases and provides a home for Washington DC basketball, this arena is designed to be incredibly flexible to meet the entertainment needs of the community. It’s has many of the features of a larger venue, yet it provides an intimate setting for a great guest experience.

The training centre is designed with amenities inclusive of sports training to meet NBA standards and drive recruitment opportunities. It is focused on player training, development, recovery and rest. It features strength training equipment, hydrotherapy, two large indoor courts and a lounge to encourage respite and recovery. The kitchen has a display cooking area, which can feature the team chefs creating and training players about nutrition and meals.

Coaches and staff offices have views onto the courts, allowing them to stay connected to player practices. 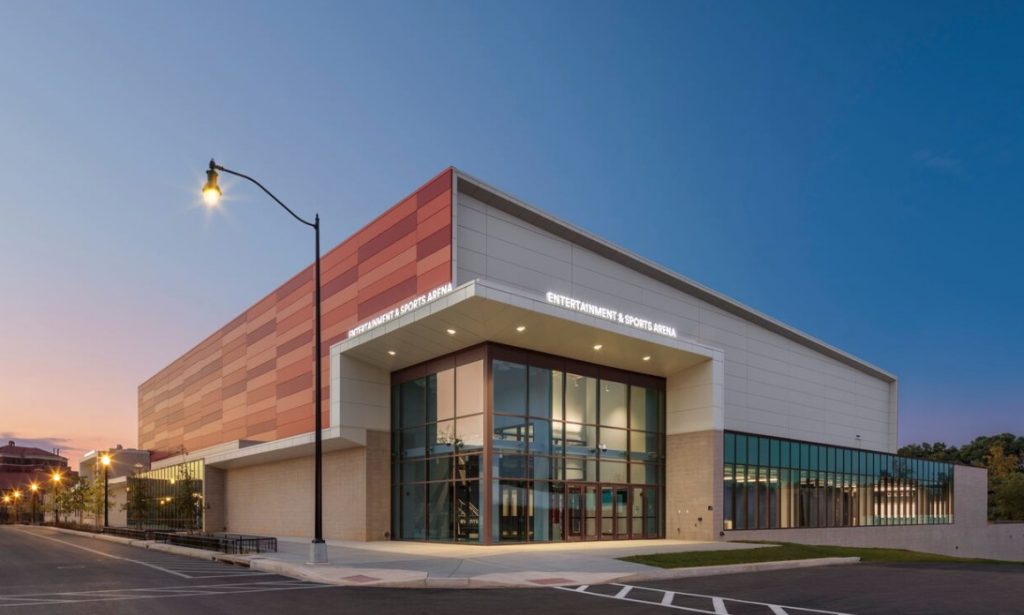 It is always a challenge to bring a building of this scale to an historic neighbourhood. In this instance, the design required a sensitivity and respect to the context of the St. Elizabeths campus. The metal panels that were chosen not only provided a low cost, efficient solution, but the specific terracotta colour palette was meticulously selected to complement the brick of surrounding buildings.

We used industrial materials in a bespoke way, tweaking proportions and colours to a new level, to draw in the surrounding historic landscape.

The intent was to provide a direct visual relationship with the brickwork of the existing historic buildings of the campus – but to make that connection in a contemporary way through variegated metal panels in three different terracotta tones.

Important to the architecture team was the creation of an iconic design that serves to revitalise the historic campus, while also inspiring pride within the Congress Heights community, as Marshall explained:

It’s now time for communities east of the Anacostia River to take part in our city’s renaissance. The ESA is the catalyst for that growth.