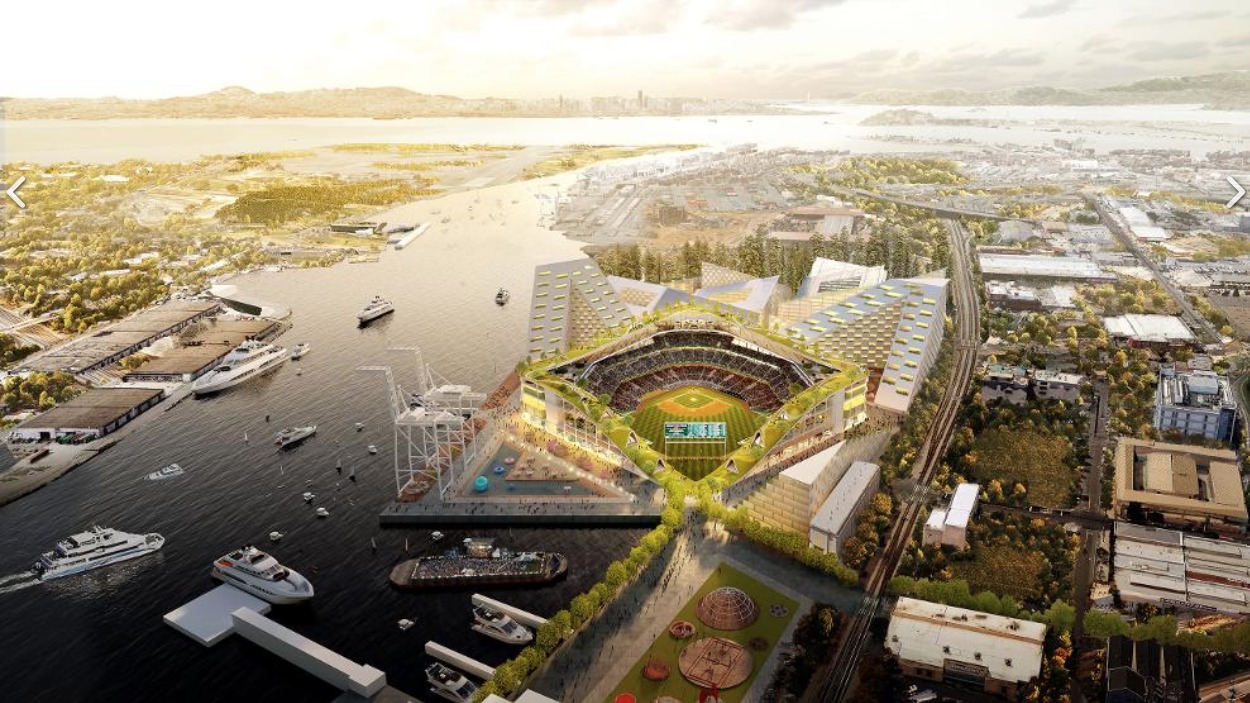 The Oakland A’s ballpark at Howard Terminal, designed by Bjarke Ingels Group (BIG), returns the baseball experience to the roots of the sport, while reimagining the ballpark anew. A ‘ballpark within a park’, the intimate stadium is nestled carefully into its urban surroundings.

To create the most intimate experience in baseball, plans call for a total capacity of around 34,000 – including fixed seats and general admission experience areas – to be arranged in the closest configuration possible to home plate, along with an elevated park that wraps and frames the bowl, coming down to meet the waterfront. The square block of the ballpark district will sit neatly within the extended urban fabric of Oakland, transforming the ballpark’s concourses into street, and concessions into restaurants. Diverse programming embedded within and around the ballpark will ensure the ballpark, and the park that sits atop it, are active on game days and non-game days alike.

We are excited to build a bold, iconic ballpark at Howard Terminal. This design will allow us to blur the boundaries of a traditional ballpark and integrate into the surrounding neighbourhood. However, this undertaking is bigger than baseball. In addition to developing at Howard Terminal, we plan to redevelop the Coliseum to help that site realize its full potential for the residents of Oakland for the long-term. We look forward to continuing our work with the community to develop both projects.

We’ve spent the last year engaging in community dialogue with over 100 public officials, 80 community-based organizations, and 500 Oakland residents and community leaders. Our conversations with leaders in business, labor, government, and faith, in addition to neighborhood residents, have underscored the desire for this project to deliver real economic, civic, and cultural benefits, including job creation and training opportunities; an inclusive approach to economic and community development; and new civic, cultural, and recreational amenities. We are also committed to delivering a baseball experience for our fans like no other. Our proposed two-project approach will enable us to deliver on our promises to both our fans and community. 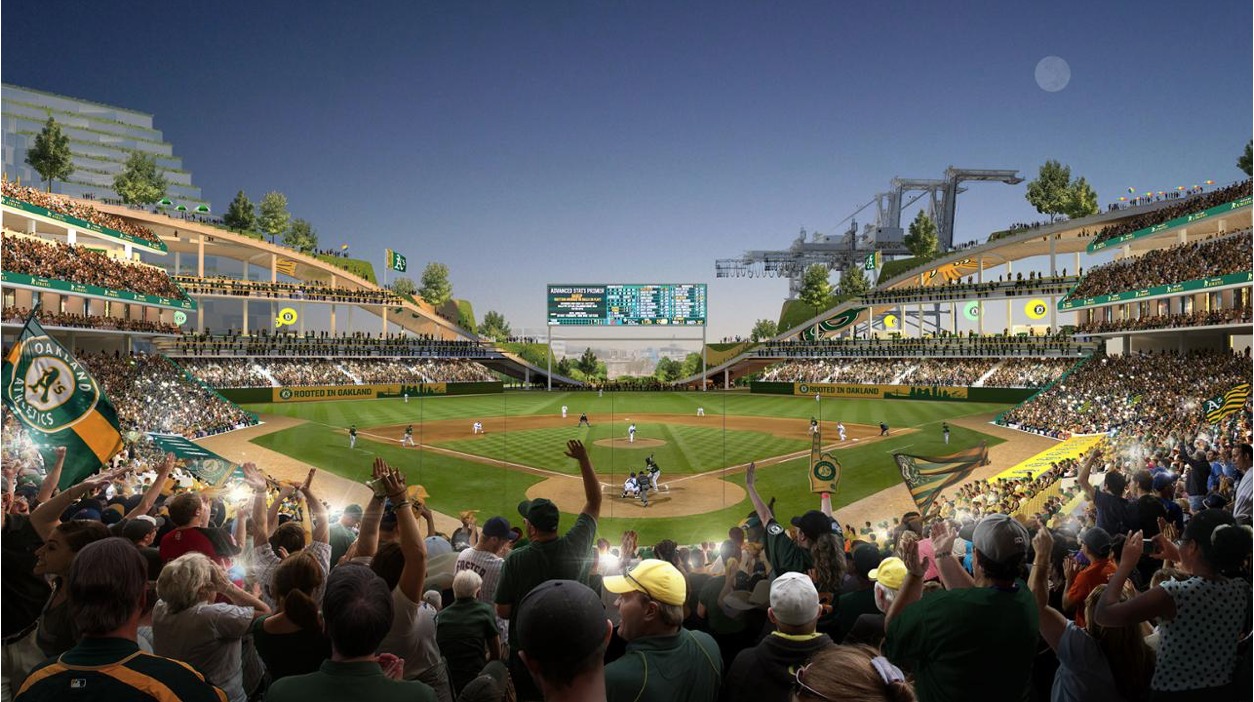 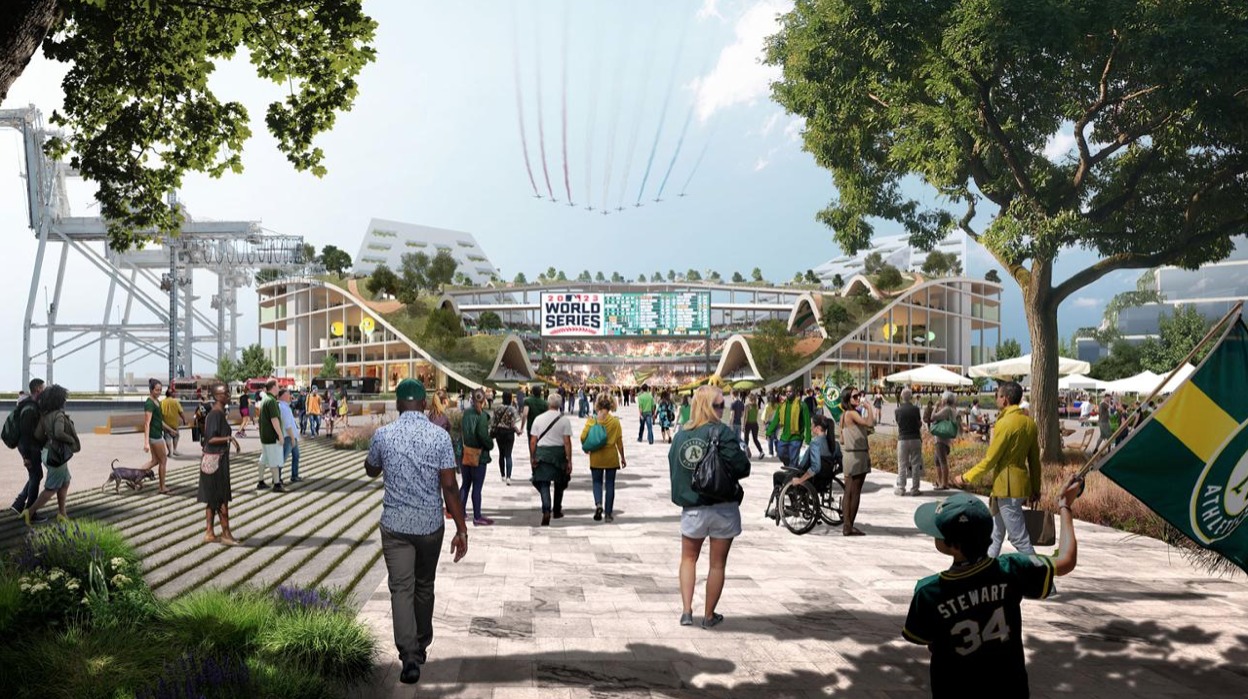 Our design for the A’s new home at the heart of Oakland’s revitalized waterfront seeks to return the game to its roots as the natural meeting place for the local community. An elevated tree-lined promenade frames the ballpark on all sides, dipping down to meet the public square and open the field to the water and city views. The perimeter park connects a cascade of social spaces for the fans to enjoy the sport on game days and extends the urban fabric with a neighborhood park to be enjoyed 365 days a year. In other words-we are putting the ‘park’ back in ‘ballpark’.

At the Oakland Coliseum site, the A’s seek to transform the current site in ways that will address several specific community needs and opportunities expressed by East Oakland residents. Working with public agencies and community residents, the A’s plan to revitalise the Coliseum by pulling the adjacent neighbourhood fabric into the site, and creating new economic, cultural and recreational opportunities.

The new park will be anchored by the two focal points of Oakland sports history: Oracle Arena, repurposed as a concert and cultural events centre; and the original Coliseum baseball diamond, preserved to inspire the next generation of ballplayers. 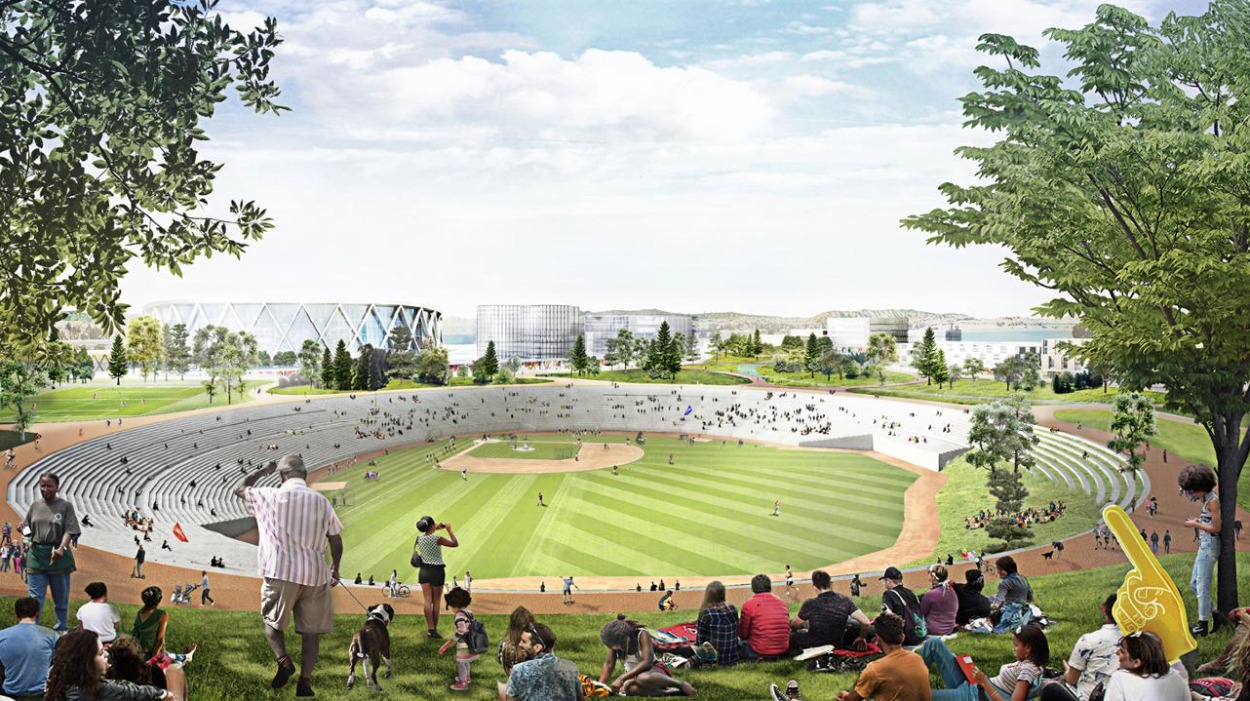 Preliminary plans for the reimagining of the Coliseum site include a large park, surrounded by substantial new housing, including affordable housing, a skills center, community gathering space, office and retail developments, and restaurants 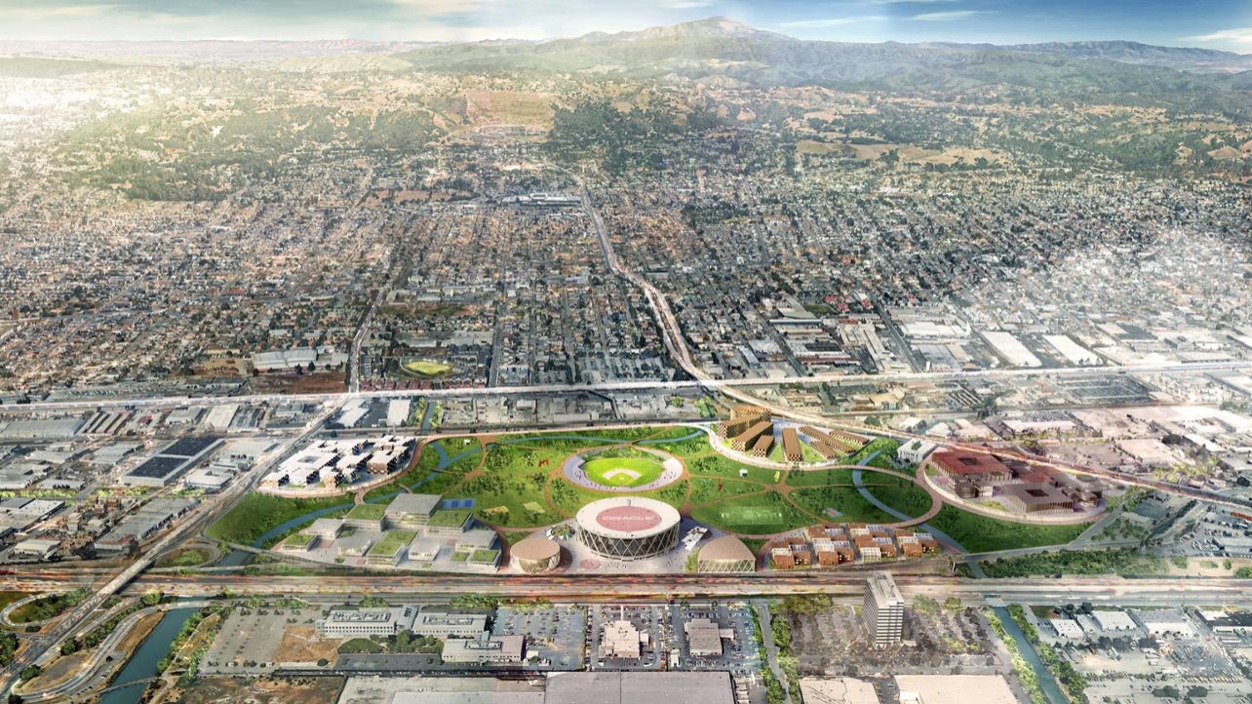 As a next step in this process, the A’s will embark on a “120-Day Action Plan” focused on five key items: (1) gathering additional community feedback; (2) beginning the environmental review process at Howard Terminal; (3) negotiating an agreement with the Port of Oakland; (4) developing a framework with public officials for the Coliseum redevelopment; and (5) developing a framework for an economic and community benefits agreement.

BIG is a Copenhagen, New York, and London based group of architects, designers, urbanists, landscape professionals, interior and product designers, researchers and inventors. Founded by Bjarke Ingels in 2005, the office is led by 17 partners and is currently involved in projects throughout Europe, North America, Asia and the Middle East. BIG’s architecture emerges out of a careful analysis of how contemporary life constantly evolves and changes. Not least due to the influence from multicultural exchange, global economic flows and communication technologies that together require new ways of architectural and urban organisation. BIG believes that in order to deal with today’s challenges, architecture can profitably move into a field that has been largely unexplored. A pragmatic utopian architecture that steers clear of the petrifying pragmatism of boring boxes and the naïve utopian ideas of digital formalism. Like a form of programmatic alchemy, BIG creates architecture by mixing conventional ingredients such as living, leisure, working, parking and shopping. By hitting the fertile overlap between pragmatic and utopia, BIG’s architects once again find the freedom to change the surface of our planet, to better fit contemporary life forms. Past BIG projects are in the carousel above.

Gensler is a global architecture, design and planning firm with 46 locations and more than 5,000 professionals networked across Asia, Europe, Australia, the Middle East and the Americas. Founded in 1965, the firm serves more than 3,500 active clients in virtually every industry. The Gensler Sports + Convention Centers practice is committed to creating unparalleled game day experiences through collaborative venue design and placemaking. Notable projects include the new home of the Golden State Warriors, Chase Center, the MLS gamechanger, LAFC’s Banc of California Stadium, as well as the reinvention of Hohokam Field and the Lew Wolff Training Complex in Mesa, Arizona, for the Oakland A’s.

James Corner Field Operations is a leading-edge landscape architecture, urban design, and public realm practice with offices in New York, San Francisco, and Philadelphia. The practice is renowned for bold, transformative design in complex urban environments, inspired by place and culture, and informed by an inclusive and engaging process. In all of the work, the aim is to bring beauty, engagement, health, and vitality to the different kinds of environments in which people live and interact. Major projects include the design of the High Line in New York City; Chicago’s newly redesigned Navy Pier; Domino Park in Brooklyn; Tongva Park in Santa Monica; Cleveland’s Public Square; Seattle’s Central Waterfront; London’s South Park Plaza at Queen Elizabeth Olympic Park; and the Pier 70 Waterfront and Presidio Tunnel Tops in San Francisco.