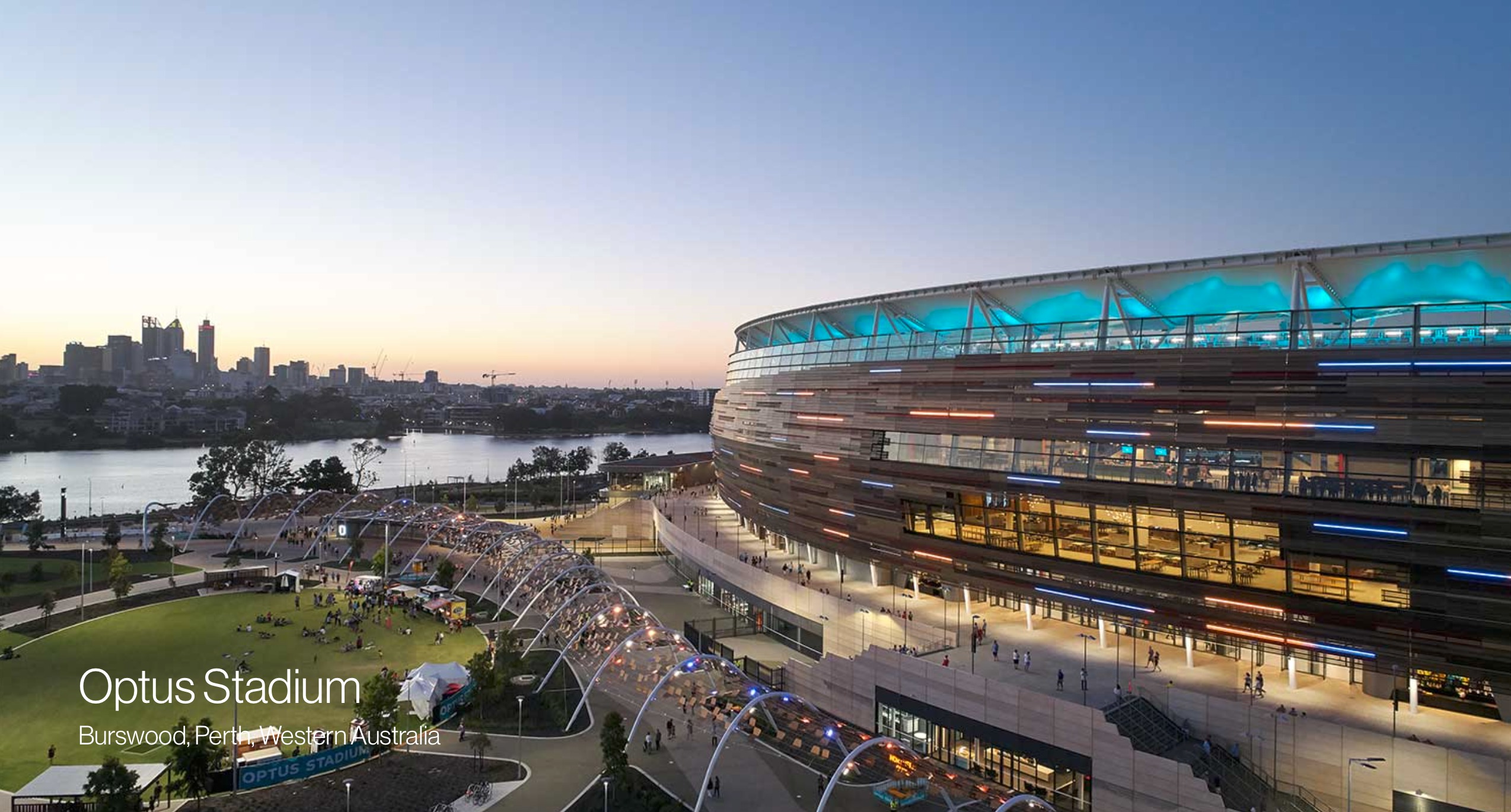 In a gala ceremony held in Melbourne, Optus Stadium – designed by HASSELL, Cox Architecture and HKS – received two of the top honours at the Australian Institute of Architects (AIA) National Awards.

In presenting the Public Architecture award, Jury Chair Richard Kirk noted that entries in this category were “especially strong, presenting an array of formidable projects that demonstrated great diversity, innovation and maturity.”

The jury citations provided a comprehensive overview of the project’s best qualities across each category:

Optus Stadium is the centrepiece of an integrated stadium park precinct. The precinct provides essential public transport, with two new train stations and a pedestrian bridge facilitating a direct connection to the city.

The legibility of arrival at the stadium is clearly defined by treatments in the stadium park landscape and other devices such as pergolas. The clarity of wayfinding continues inside, as views from the main concourse to the field are maintained around the entire stadium. The seating geometry is configured to optimise viewing, balancing the diverse and often conflicting aspects of spectator comfort against the solar and wind qualities sought on the field for the players.

The stadium structure is restrained and clearly efficient rather than overplayed and wasteful. There is an elegance in the formal restraint and this reads as an effort to use materials resourcefully, enabling the speed of delivery but also reducing life cycle costs. The fine-grain variegated screening on the stadium exterior reduces the visual impact of the building and reinforced the stadium’s desire to focus on the spectator experience rather than on itself. 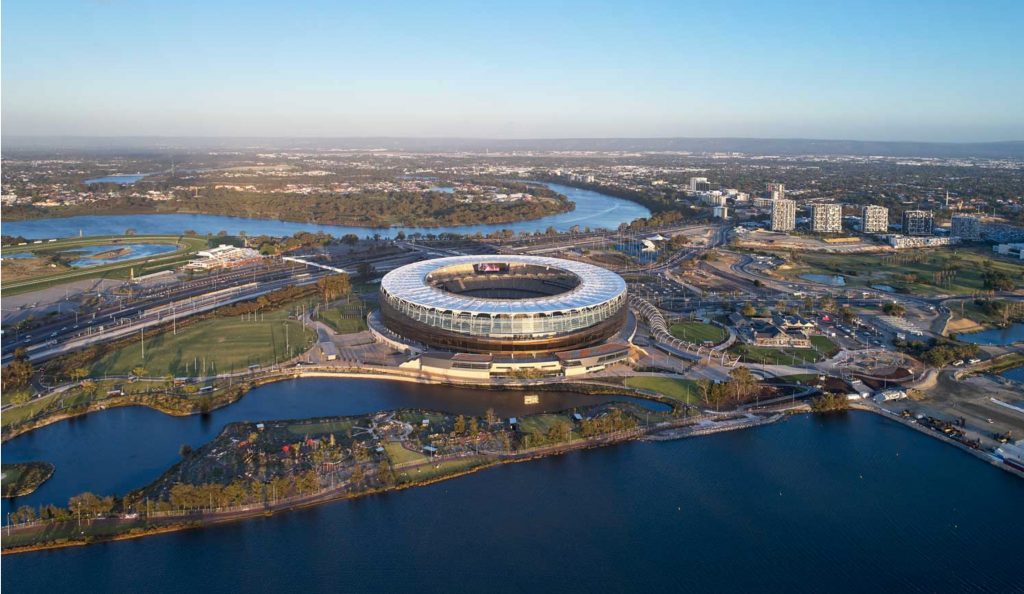 Optus Stadium is an immensely complex undertaking that successfully resolved structural, social and commercial challenges to deliver a world-class sporting arena. The project used approximately 14,000 tonnes of structural steel to achieve clear cover to 85 percent of the 60,000 seats, while addressing challenging ground conditions. The use of steel complemented an ambitious fast-track construction schedule, allowing future flexibility and a high level of refined architectural detailing.

All primary steelwork was fabricated in Western Australia ahead of schedule. The design also future-proofed the stadium for a 10,000-seat expansion, with uninterrupted sightlines and the inclusion of removable steel plates for an athletics track. Other key steel initiatives included a piled structure to overcome the ground conditions; single-span feature roof trusses with architectural pin connections; feature primary steel tapered columns, beams and seating bowl rakers; prefabricated facade cladding modules; Australia’s largest video screen structures; the complex curved geometry of the community arbour; Colorbond roofing on the food and beverage and ticket gate pavilions; and Colorbond roller shutters throughout.

The architectural and structural geometry of the roof was also developed to address and ambitious program requiring prefabrication as well as transportation and erection challenges. Cleverly designed pin joint systems have tolerances that can absorb differential movement across the joints of the structure below and this allows fine-tuning to ensure alignment of the leading edge.

The jury was impressed by the architects’ innovative use of steel, both as a regional economic contributor and in its significant contribution to the overall success of the stadium’s design and resolution. All in all, a compelling and worthy contribution to Australia’s steel architecture tradition.

The Contractor/Builder on the project, with the 60,000-seat stadium the centrepiece, was Brookfield Multiplex. 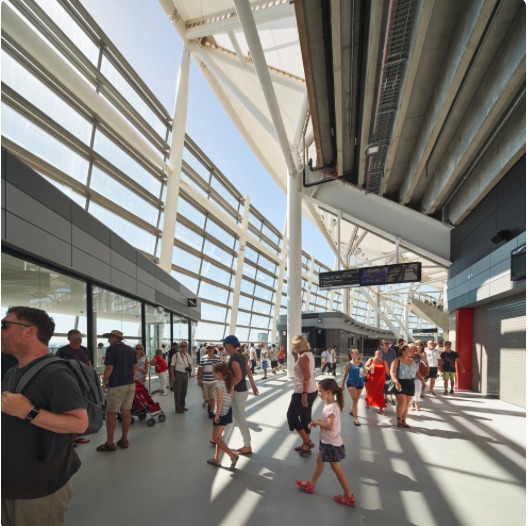 The venue can accommodate AFL, cricket, rugby league and union, soccer and entertainment events. It also has the future capability to host major events consistent with the requirements for Commonwealth Games and international athletics.

For further information on Optus Stadium, simply click on the image below to view their listing in the Sports Venue Business (SVB) Directory… 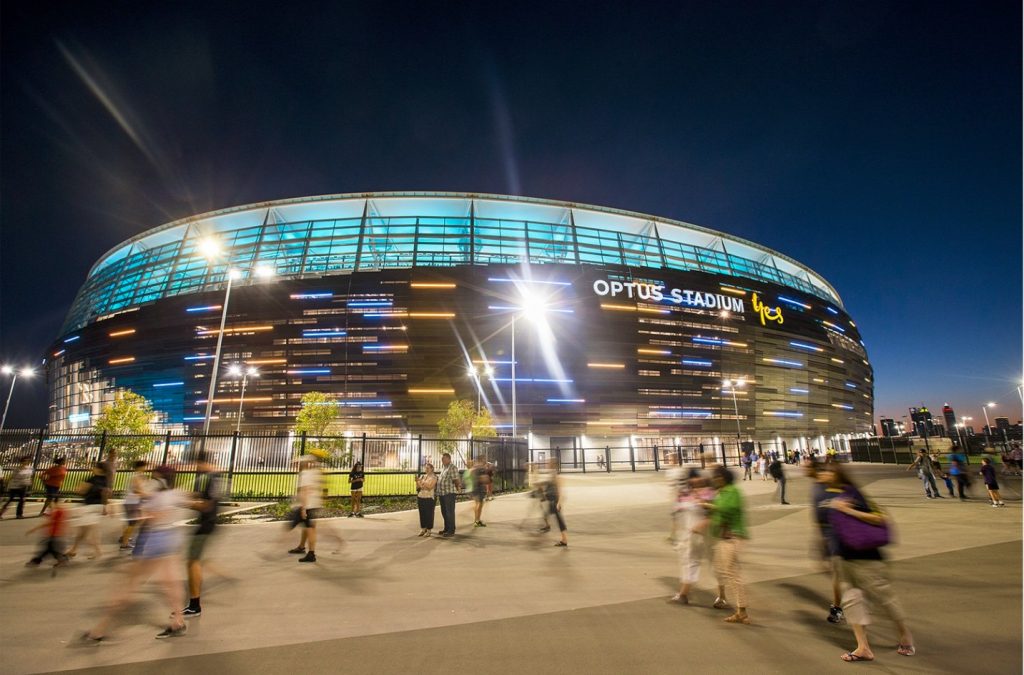