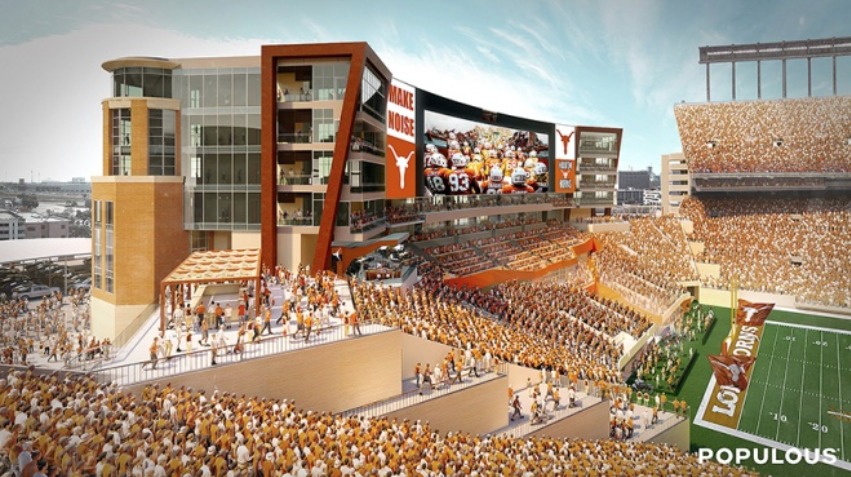 According to The Daily Texan, the University of Texas (UT) has announced further details on the US$175m south end zone expansion to Darrell K Royal Texas Memorial Stadium (DKR Stadium), along with the name of the architecture firm set to design the expansion.

Additions to the south end zone include a new screen, renovations to the student seating area, a student terrace and concession stand, and a glass-walled building housing multiple tiers of suites.

When the project is finished, everyone will be very pleased with it. It will be a definite improvement to the south end zone of the stadium, and it will in essence complete the master plan that was envisioned more than 12 years ago for the stadium as a whole.

UT’s Board of Regents voted to add the expansion back in August, but it was not until last week that Populous, an international architectural and design firm, based in Kansas, was chosen to design the project.

Sherri Privitera, Populous’ Principal-in-charge for the project, said in a press release:

The modern game day experience is about quality, not quantity. Fans want unique experiences in an authentic place. This is a game-changing project. From fully enclosing the stadium for a more intimate atmosphere to the impactful in-seat Longhorn logo, it is the ultimate celebration of the University of Texas.

The construction will also update the older parts of the Moncrief-Neuhaus Athletic Center, which is housed in the south end of the stadium.

Construction will begin in 2019 with the athletic centre and is planned to end before the start of the 2021/22 season.