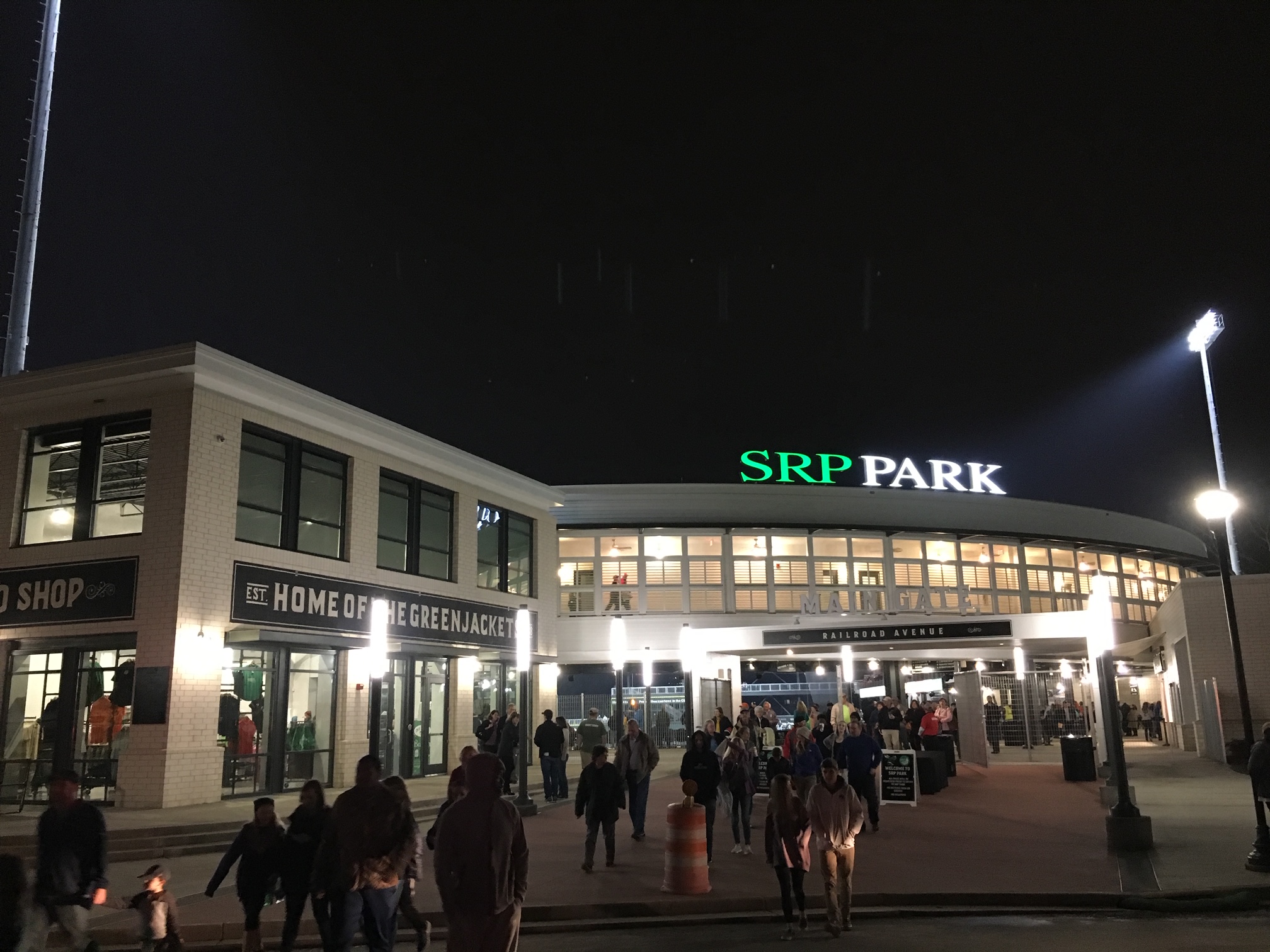 Year after year, the owners of the Augusta GreenJackets worked to gain approval for a new commercial development in downtown Augusta. It would have a new ballpark as its centrepiece, of course.

Years of frustration turned to joy when just such an arrangement came to fruition in the neighbouring municipality of North Augusta, South Carolina. The result is Riverside Village with SRP Park as its crown jewel. And that jewel of a ballpark is the 2018 BaseballParks.com Ballpark of the Year.

For 19 straight years, BaseballParks.com has presented this honour to the new or remodelled baseball stadium with the best combination of site selection, exterior appearance, architectural design and fan amenities. The selection is made by an advisory panel utilised by the 21-year-old website. 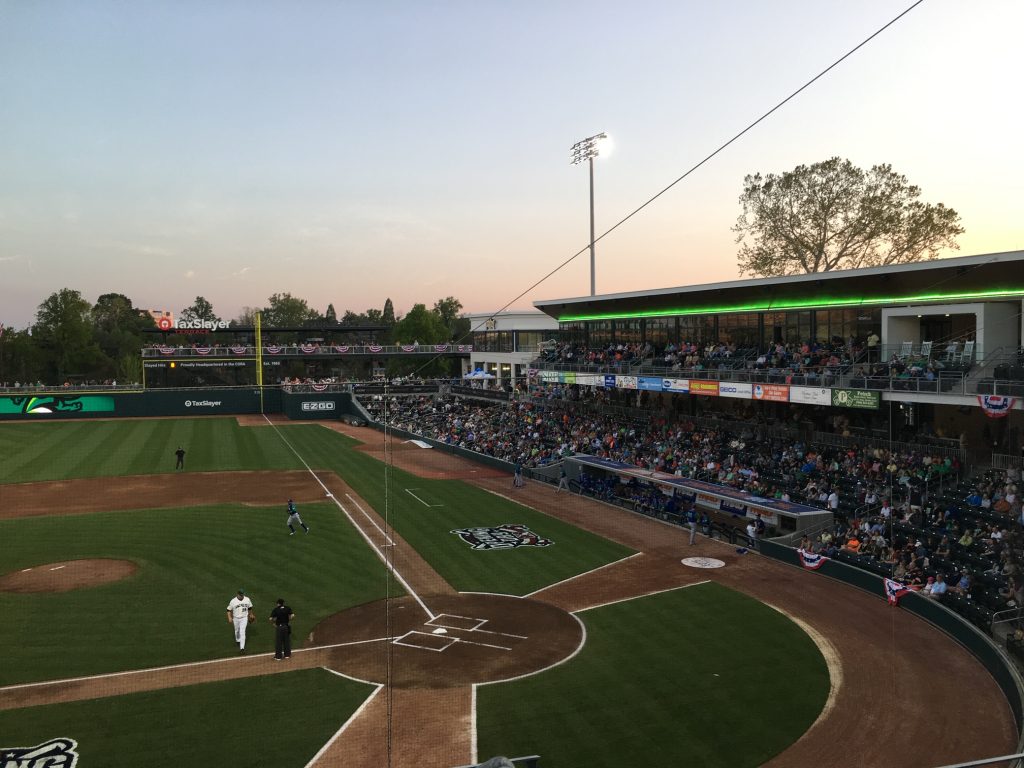 Above & below, courtesy: TL Shultz | ISC 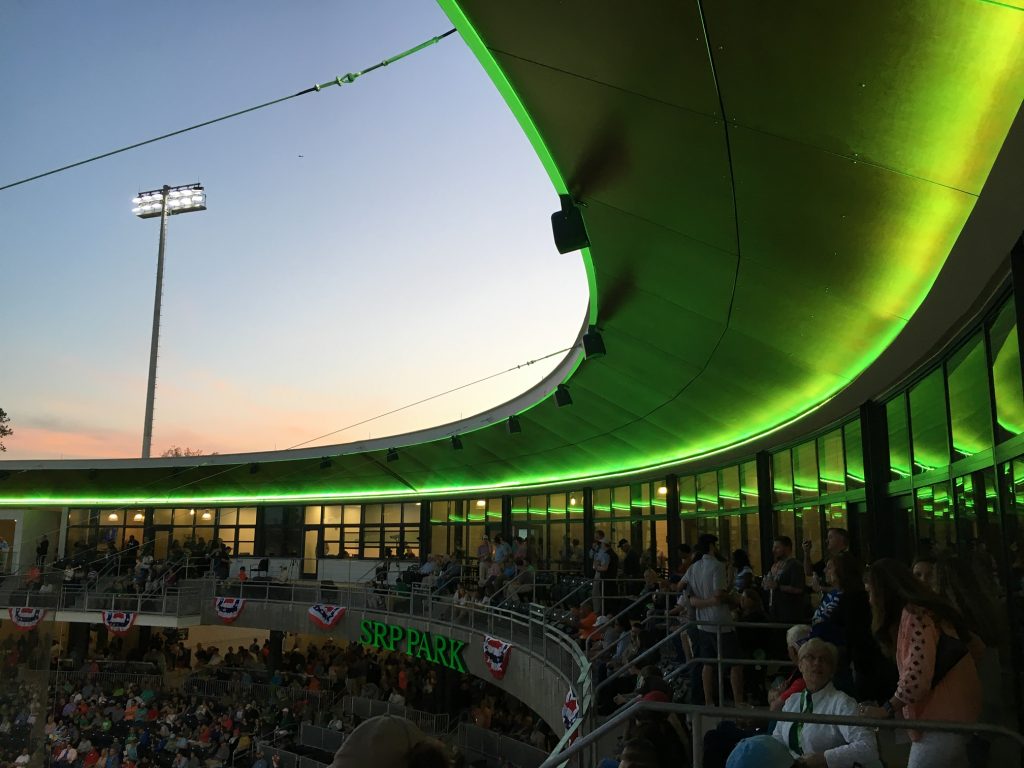 The announcement of the award was also made in the pages of the August 8th edition of USA TODAY Sports Weekly.

Joe Mock, founder and webmaster of BaseballParks.com, and a frequent contributor to USA TODAY publications, penned the article that announced that North Augusta’s new showplace is the winner of this year’s plaque.

Jeff Eiseman of Agon Sports & Entertainment, which owns and operates the GreenJackets, said:

For BaseballParks.com to give us this award is truly an honour. When you have an outside, independent, respected voice that has done its due diligence seeing every ballpark, recognise our ballpark with this award, it’s truly special. It is affirmation of what we believed. And we’re in tremendous company considering the others that have won it. 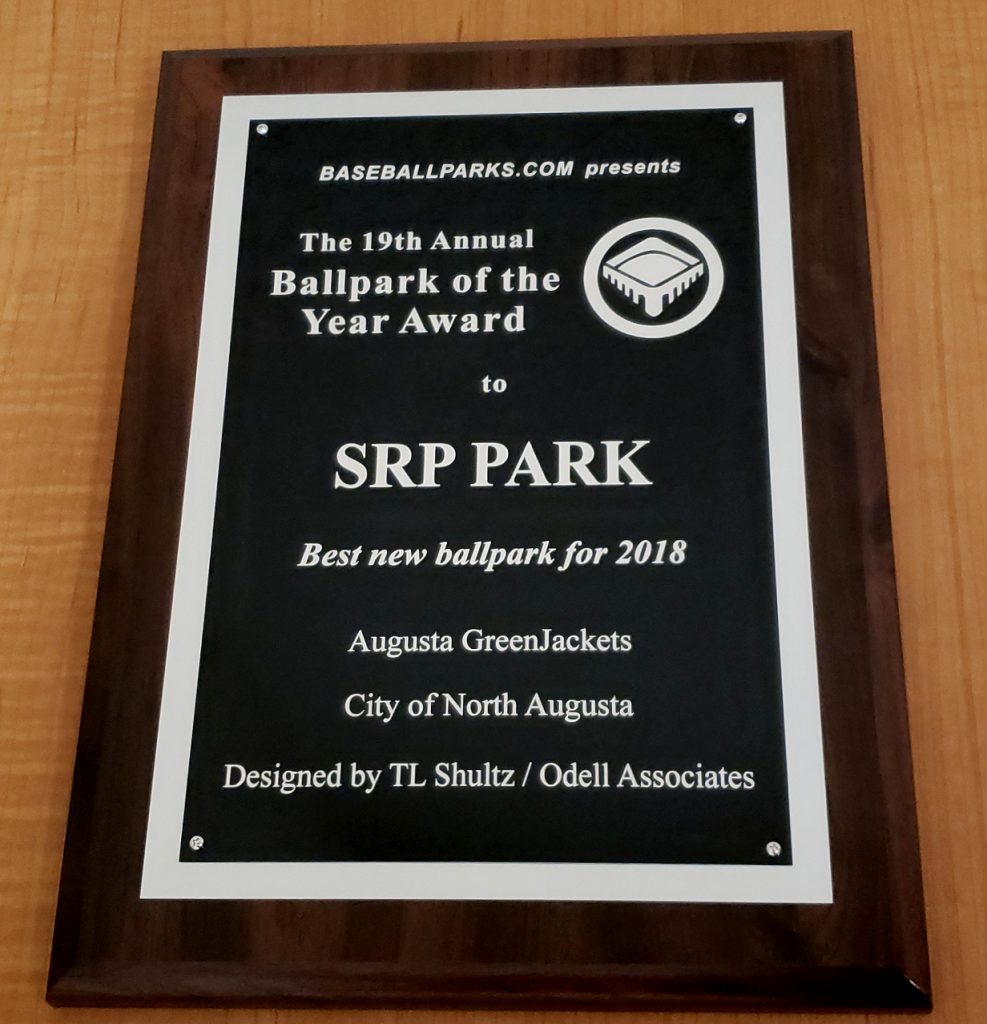 Indeed, from San Francisco’s AT&T Park winning the first annual award in 2000 all the way through last year’s recipient Dunkin’ Donuts Park in Hartford, the list of past winners reads like a Who’s Who of standout baseball facilities. Those honorees include Pittsburgh’s PNC Park in 2001, San Diego’s Petco Park in 2004 and Columbus’ Huntington Park in 2009.

I always enjoy scrutinising a new park as soon as it opens. When I visited SRP Park on its opening night, though, I knew instantly that this was a truly special facility – one that will stand out for many years to come. Its riverside location and the way the park’s design takes advantage of that are truly remarkable.

Mock, who has visited all 203 ballparks used by the Major Leagues, spring training and the affiliated Minor Leagues, added:

The tremendous commercial development that is rising around it and the growing number of concession choices within the park make me look forward to visiting SRP Park many times in the future.

In many respects, the honour is an architecture award, highly prized by designers of sports facilities. The creative mind behind SRP Park’s design is Tad Shultz of TL Shultz | ISC, and he was delighted to hear of the recognition.

Receiving this prestigious award is incredibly gratifying, both personally and professionally. Having dedicated my career to the design of sports venues, it remains my lasting passion. I am humbled and thankful to have been trusted with such an important project that will impact generations.

As a project team, TL Shultz and Odell (the architect of record) have been blessed with a stunning site location on the Savannah River along with world-class clients – Greenstone (developer), the GreenJackets and the City of North Augusta. Our communal vision for a transformational mixed-use destination, anchored by SRP Park, is bringing to fruition a game- changing legacy project for the region.

When informed of the award, the City Administrator of North Augusta, Todd Glover, remarked:

When the City of North Augusta teamed up with the GreenJackets to bring baseball to our community, a high-quality venue was vital to our riverfront development. We are thrilled that our stadium is now being recognised nationally. It is symbolic of the excellence that our citizens expect.

SRP Park is the gem we all knew it would be and I am so pleased that BaseballParks.com recognised what a tremendous facility it is. All of the hard work and effort put forth by the ownership group led by Chris Schoen, Jeff Eiseman, Missy Martin and Tom Denlinger was well worth it, and this honour is something that everyone in the GreenJackets organisation and the city of North Augusta should be proud of. 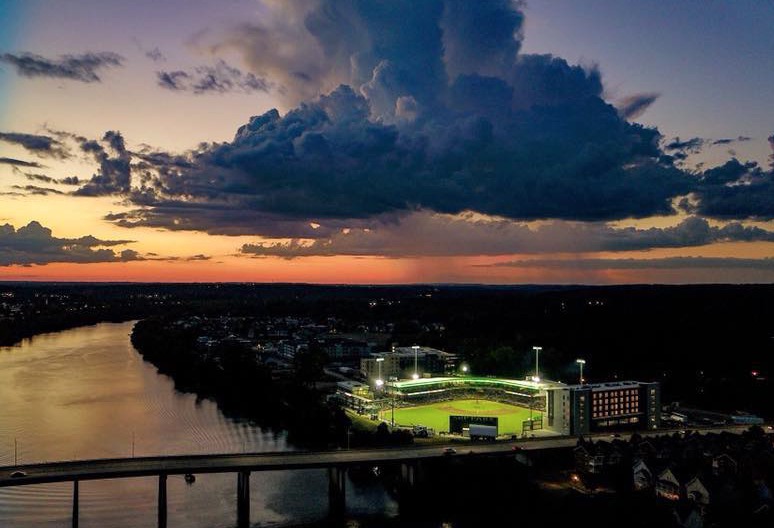 The GreenJackets are the Class A affiliate of the San Francisco Giants. They play in the South Atlantic League.

Unlike other ballpark awards, the honour presented by BaseballParks.com is merit-based, not voted on by fans. “As we do every year, our advisory panel discussed how best to apply the criteria for the award, and we agreed SRP Park was extremely deserving,” explained Mock.

Participating on the Advisory Panel with Mock are Doug Greenwald, who’s been doing play-by-play in pro baseball for the past 23 seasons, and Graham Knight, author of three books on ballparks and who operates the popular Baseball Pilgrimages website. Greenwald and Knight have each visited over 200 pro ballparks.