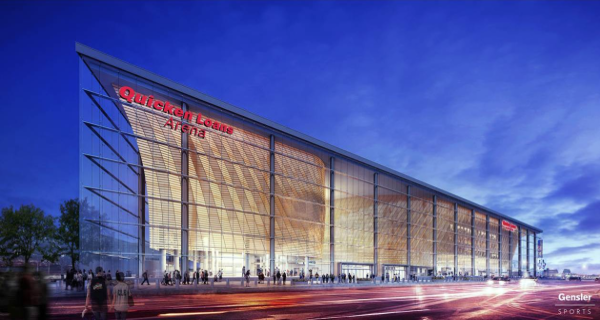 With less than a month to go before Quicken Loans Arena opens its doors once again for the start of the 2018-19 Cleveland Cavaliers, Monsters, concert and event season, work continues apace on the transformation.

As it enters its 25th year of operation, the publicly-owned Quicken Loans Arena (The Q) is being transformed into a state-of-the-art facility that will allow it to compete for years to come. The continuing project also has resulted in the extension of the Cleveland Cavaliers lease at The Q, committing to the arena for at least 40 years since its original lease, which is among the longest facility tenures in pro sports history.

Crews are making significant progress on both the exterior and interior renovations of the building, which will include the completion of several interior spaces by the time The Q re-opens next month with a star-studded, jam-packed, diverse schedule of 17 events featuring comedy, concerts, faith, and sports.

The Q Transformation, made possible by a public/private partnership formed between the City of Cleveland, Cuyahoga County and the Cleveland Cavaliers, will modernise the publicly-owned venue and allow it to compete for and attract high-profile events, improve the guest experience, and ensure that it positively impacts for the City of Cleveland, Cuyahoga County, the community and neighbourhoods, and the region for the long-term future. It will also extend the Cavs lease all the way to 2034 – putting the Cavs in The Q for at least 40 years total since they moved into the building in 1994, one of the longest terms in the NBA. 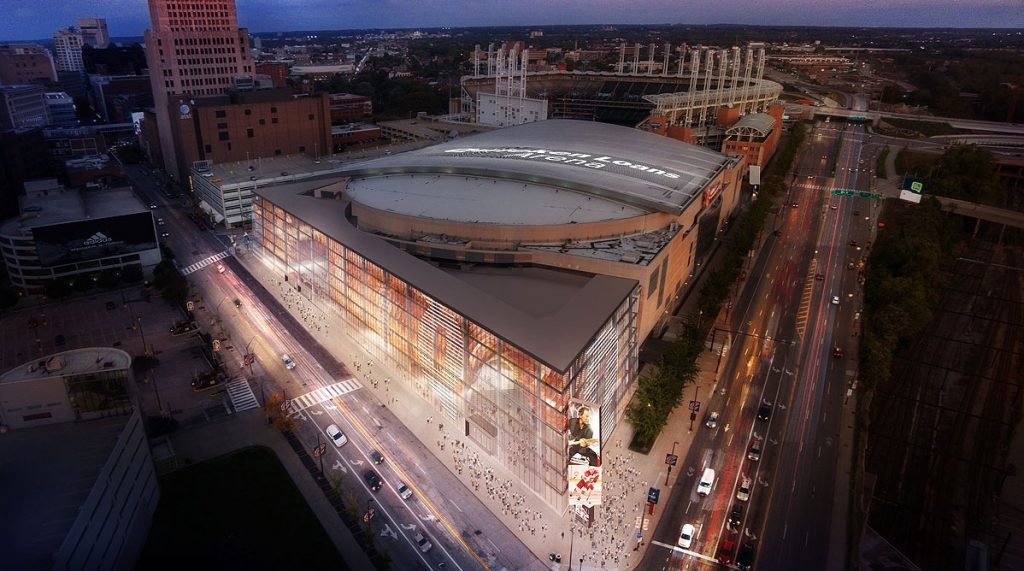 Dan Gilbert and the Cavs organisation are committing an additional US$45m of private funding towards additional updates and improvements to The Q. This raises the team’s current private funding commitment to over US$115m, while the Transformation project’s total investment scope now grows to US$185m.

The original US$140m investment for the project was a 50/50 split with the Cavs committed to paying US$70m, plus covering any cost overruns.

The Cavs portion of the funding will cover all non-public, club, suite, team, premium space, AV/LED, lighting and multi-media upgrades, as well as a significant portion of the public space updates, which includes concourse improvements and square footage increases.

The existing US$70m capped, public portion of funding will be repaid almost entirely from direct, arena event-related revenue sources and is being used to complete the remaining portion of the public space re-design, as well as the associated square footage increases.

The revenue sources are primarily comprised of the existing Admissions Tax on tickets sold for events at The Q.

To date, the most visible work has been the demolition of the exterior north side of the arena (along Huron Rd from Ontario St. to E. 6th Street) to make way for the new glass façade and atrium that will add 42,530sqft of new public space to The Q. The foundation that will support the atrium has been laid and giant steel columns that form the perimeter of the glass wall are currently being installed. The glass installation will begin at the northeast corner soon and will be ongoing throughout the year.

Work on the south side of the arena has expanded the building’s footprint out toward Gateway Plaza and will add 6,350sqft to The Q. This additional square footage will increase the space to provide a more fan-friendly entryway into the arena and create a larger concourse area that will significantly improve wayfinding and pedestrian flow. It will also make way for a newly-created neighbourhood that will include new food and beverage options on the arena’s south side.

While work will continue on the concourse renovation throughout the season, the new south entry on Gateway Plaza will be completed for the arena’s re-opening in October.

The exciting transformation taking shape inside The Q will be evident when fans return for a full event schedule later this year. Work has begun on larger public spaces that will be under construction during the season as fans are asked to “pardon our dust.”

The new hospitality area located in Loudville presented by FirstEnergy, located at the south end of The Q’s upper level, will feature new seating and standing room views of the court, as well as a central bar for fans to gather. All fans will be welcome to enjoy this new Loudville space that will be open during all Cavs home games, as well as most other arena events beginning in the 2019-20 season. To make room to build this exciting area, the seats and concrete risers in sections 216, 217 and 218 have been removed. Fans and guests will notice that this area will be blocked off for the entire 2018-19 season as work continues.

Concourse Floors:  The original flooring throughout the main and upper level concourses is in the process of being replaced. The upper level flooring will be nearly completed for the start of the upcoming 2018-19 season, while the existing surface on the main concourse has been removed and covered with temporary paint. This will be a work in progress throughout the season. 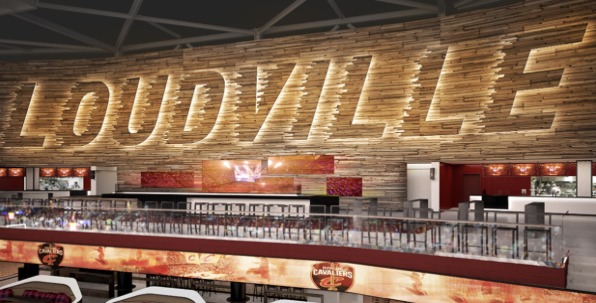 When The Q re-opens, it will feature two new membership hospitality areas, as well as three existing clubs that have been updated with reconfigured layouts, modern finishes and furnishings, and the latest technology. All feature all-inclusive food and beverage service for members and their guests.

Access to these hospitality spaces will be exclusive to those with a Foundation Membership, the new premium membership club of the Cleveland Cavaliers. This new customised platform will also provide members with enhanced access to year-round members-only events, exclusive experiences, amenities and more.

These enhanced membership spaces will also provide the all-important hospitality amenities that are critical in competing for and attracting national and international events the magnitude of the Republican National Convention hosted at Quicken Loans Arena in 2016, a future NBA All-Star Game, NCAA Championships and more.

These spaces and amenities have been carefully updated and designed in relation to fan-based user feedback the Cavaliers have received and been able to incorporate into the renovation and build out of the existing and new areas.

In addition, the suites located on the Huntington Bank Club Level (4) and everstream Founder’s Level (2) will have a fresh look, all updated with new seating, finishes, décor and technology.

The Cavaliers locker room is also undergoing a total redesign and reconfiguration that will be ready for the tipoff of the 2018-19 season. The locker room redesign and renovation is also being privately funded by Cavaliers ownership as part of the additional US$45m commitment.

Quicken Loans Arena will close again for the summer of 2019 to complete The Q Transformation for the start of the Cavaliers 2019-20 season.

The Q Transformation is a major renovation project to update nearly 24-year-old Quicken Loans Arena (The Q), home to the NBA Cleveland Cavaliers, AHL Cleveland Monsters and over 200 ticketed events annually. The publicly-owned arena, located in the Gateway District in downtown Cleveland, is operated by the Cavaliers organisation.

The project is a partnership between City of Cleveland, Cuyahoga County and the Cavaliers that will modernise the venue to maintain its world-class status, enhance the fan experience, and continue to provide a positive impact for the city of Cleveland, the community and neighbourhoods and the region over the long-term.

The Q Transformation will extend the Cavs lease through 2034 and will bring an NBA All-Star Week to Cleveland. The transformation of Quicken Loans Arena will be completed for the start of the Cavaliers 2019-2020 NBA season.

To learn more and view renderings go to TheQTransformation.com