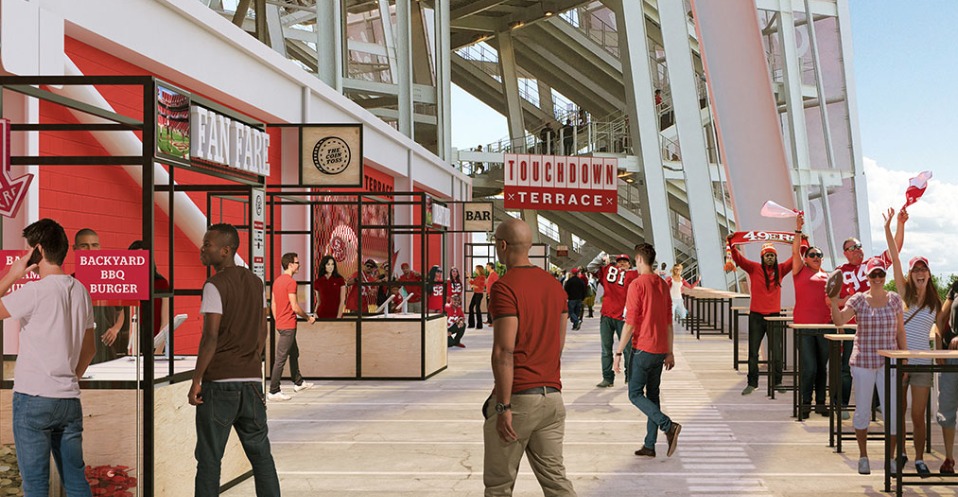 The San Francisco 49ers and Levy announced the creation of the newest food and beverage destination at Levi’s® Stadium—Touchdown Terrace—along with several other dining and hospitality enhancements this month.

Touchdown Terrace, opening for the start of the regular season with an eclectic menu of dishes from well-known Bay Area restaurants and a one-of-a-kind gameday signature dish competition, is designed to unite fans around great Bay Area food, beverages, and friendly hospitality.

Introducing the Touchdown Terrace enables us to create an attractive fan environment out of a previously underutilized area of the stadium while adding concession points of sale designed to improve line speed throughout the venue. In addition to bringing in delicious new food options that are already Bay Area fan favorites, Levy has helped us increase our quick serve options to enhance the speed and efficiency of our concession services.

Touchdown Terrace, stretching around the outer ring of the Levi’s® Stadium main concourse between the 50-yard line and endzone nearest Toyota Gate F, will be the venue’s most unique dining and social gathering spot. Authentic flavors from a variety of cuisines will be provided at portable stands by forward-thinking Bay Area restaurants including Barbacco (Italian), Copita (Mexican), The Chairman (Asian street food), Michael Mina’s Bourbon Pub (American), and Salt & Straw (ice cream).

From the beginning of our partnership with the 49ers, the outer concourse stood out to us as an opportunity to create something truly memorable for the fans. Touchdown Terrace brings the space to life and gives fans a central hub to experience the best of what Levi’s Stadium has to offer.

Another Touchdown Terrace mainstay is “The Coin Toss,” a rotating bracket-style dish competition giving fans the chance to taste and vote for Levi’s Stadium’s next signature dish. During every home game, Levy, best known for creating incredible dining experiences at many of the world’s most iconic sports and entertainment venues, will taste test two new dishes at a portable kiosk and gather fan feedback to help guide future dishes.

Marked by colourful football-themed signage, floor decals, and interactive spaces, Touchdown Terrace will roll out in phases during the 49ers preseason in advance of the regular season opener on Sunday, September 16, against the Detroit Lions presented by Levi’s®.

The space will also feature a digital mosaic wall, giving fans the chance to submit photos on gameday that will be used to constantly build and refresh the interactive graphic. Fans can also receive a photo print-out while visiting Touchdown Terrace.

Beyond Touchdown Terrace, the 49ers and Chef Severson of Levy have teamed up to infuse the Bay Area’s favourite flavors across the stadium’s dining destinations including:

Since taking over the hospitality operations at Levi’s Stadium, the Levy culinary team has also expanded integration of its services with the venue’s one-of-a-kind “Faithful Farm” – the first rooftop garden to be housed at an NFL stadium. Consisting of 7,500 square feet atop the SAP Suite Tower, the Faithful Farm has produced more than 12,000 pounds of produce since opening in 2016. 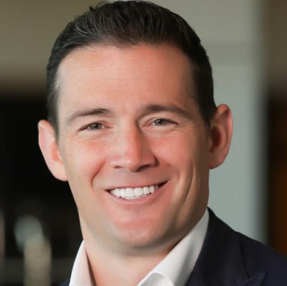 San Francisco 49ers President, and CEO of Elevate Sports Ventures, Al Guido, is one of the 40+ high-calibre industry expert speakers that will be sharing their insights and success stories at Europe’s first Premium Seat event, ALSD International, coming to London this October, 10-12, for which Levy Restaurants is a Platinum Sponsor.

Those attending ALSD International will enjoy not only two very special networking events – one aboard a boat – but also behind-the-scenes tours of The SSE Arena Wembley and Fulham FC’s Craven Cottage. Space is now limited, so make sure to secure your place!

Check out the latest conference sessions, confirmed speakers, venue tours, etc, by clicking on the below: