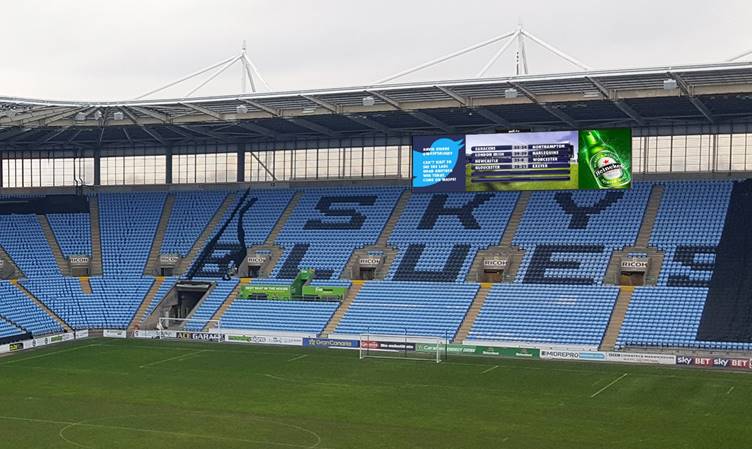 Installation of one of the largest LED screens in UK sport is underway at the Ricoh Arena as Wasps embark on a significant investment in new technology ahead of next season.

At 188m2, the new screen, planned for the South Stand, will be installed by leading stadium technology provider, ADI. The screen will be larger than those at leading stadia such as Twickenham and Hampden Park and, with a 10mm pixel pitch, it will also be one of the highest resolution stadium screens anywhere in the country.

The new screen will greatly enhance the matchday experience at the Ricoh Arena. Its super-wide format offers huge flexibility to display lots of different content simultaneously. Crystal clear replays can be delivered alongside match information to help new fans understand the rules of the game, together with social media feeds and other interactive fan content.

In addition to the new screen, an LED scoreboard and clock will be installed on the West Stand mid-tier and there is further investment in new LED screens at the Ricoh Arena entrance and inside the main atrium.

We’ve responded to fans requesting better quality screens by installing one of the largest state-of-the-art pieces of technology in UK sport.

This will massively improve people’s experience when watching Wasps. We’ve also invested in the main atrium which will improve the experience for the 700,000 people visiting conferences and exhibitions at the Ricoh Arena every year.

Geraint Williams, CEO of ADI, whose company will deliver the LED technology, said:

Wasps are really pushing the boundaries to create something special for their fans. We’re delighted to be a part of that.

The new screen technology will certainly look impressive, but it is the content that will really bring it to life. Our production team will be working with the club and its fans over the coming weeks to develop that content and help deliver an experience like nothing else in rugby. 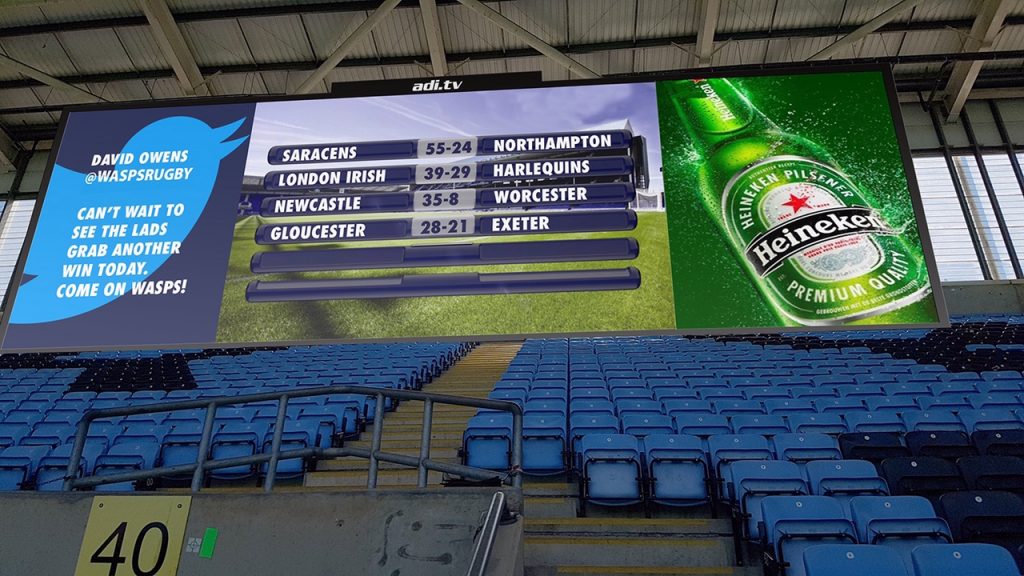 This investment in new digital technology follows the installation of high density Wi-Fi at the Ricoh Arena, allowing up to 20,000 people to log on at the same time, another major first for UK sport. Wasps have also launched a new app and installed contactless technology at all concourse bars to reduce queues and save fans from worrying about carrying cash.

A new ticketing system and online retail store is also being developed for next season. This will give fans the chance to see 3D views from their seat before buying, as well as complete mobile ticketing which reduces the need for paper or plastic cards. The new retail store will greatly improve the online experience for fans wanting to buy merchandise.

We’ve known that we needed to improve the online ticketing experience for a while but had to see out an existing contract. The new system is used at some of the world’s best venues including The O2 in London and NBA teams such as the Cleveland Cavaliers.

When you add up the new screens, app, high-density Wi-Fi, contactless technology, new ticketing and retail websites then it makes Wasps and the Ricoh Arena one of the most digitally connected venues in the UK if not Europe. Staying ahead of the game is crucial for Wasps when trying to give fans the digital experience they demand both online, at the stadium and through their mobile.

Planning and installation of the new screen is currently underway and subject to any issues with fabrication of the framework, the plan is to have the screens operational for the start of the season, but it may be the Leicester Tigers fixture on September 16 when everything is fully operational.

Ticketing, venue technology and the fan experience are just some of the topics that will be under the spotlight at Europe’s first Premium Seat event, ALSD International, coming to London this October, 11th & 12th, being delivered by the Association of Luxury Suite Directors (ALSD) in cooperation with the European Arenas Association (EAA). In addition to a high-level conference, with a host of industry expert speakers from across the globe, and an exhibition hall showcasing the very latest technologies, products and solutions from the industry leaders, participants from clubs, teams and venues including Ahoy Rotterdam, Arsenal FC, Chelsea FC, Johan Cruijff Arena – Amsterdam, Valencia CF, Real Betis Balompié, Real Madrid, Manchester City, Wembley Stadium, The O2 London, Levy Restaurants and Red Bull Racing, will benefit from interactive panel sessions and workshops, a Sales Boot Camp, two evening networking events and two very special venue tours…one of which will be a behind-the-scenes tour of The O2 London!

Event partners for ALSD International include AVIXA, Elevate Sports Ventures, Levy Restaurants, Spring and The Parker Company, along with sponsors such as IHS Global, LiveStyled and Waveworks.