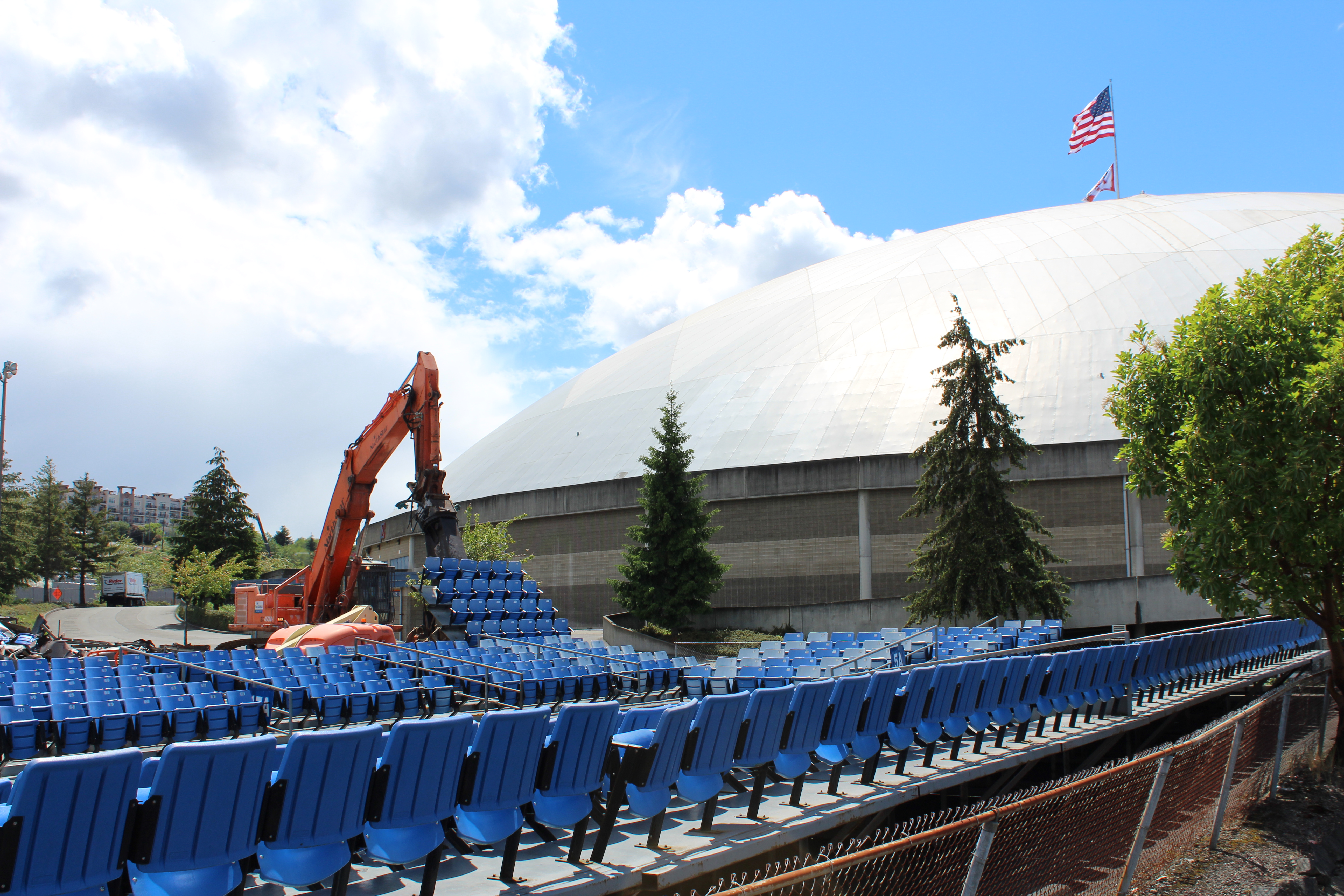 Crews began to demolish seating from the Tacoma Dome this week as part of the US$31m renovation taking place this summer. All new seating, new artist quarters and loading docks (and more) will be completed by October.

The Tacoma Dome celebrated 35 years of world-class entertainment and events earlier this year. The iconic venue has hosted more than 25 million people at thousands of events, including the music industry’s top touring artists, championship athletic events, annual consumer shows and community gatherings since it opened in April 1983.

During its 35th year, the Dome will be enhanced as a 21st century venue with US$31m in capital improvements focused on improving the fan experience.

Beginning this month, all seating throughout the venue will be replaced with modern telescopic seating providing greater comfort for guests and quicker turnaround between events.

Additional restrooms will be added and some existing restrooms will be upgraded. Safety and security enhancements will also be made throughout the venue, with upgrades to food and beverage hospitality to be announced shortly.

Everyone we meet has a ‘Dome story’ to tell. Whether they played football here, attended their first concert, met their significant other, graduated with classmates, or established traditions at annual events with their families, the arena has provided a gathering place for memorable moments for so many.

With the support of the community and in alignment with Tacoma’s Vision 2025, this infrastructure investment ensures that the Tacoma Dome will continue to be viable, attract world-class touring entertainment and contribute positively to the economic impact and Tacoma community pride for years to come.

The Tacoma Dome opened April 21, 1983, with a four-day exhibition and series of special events called “Celebration ‘83”. Entertainment was provided by The Lettermen and Rick Nelson, with free performances in the adjoining Convention Center, now called the Exhibition Hall. The first major full concert was David Bowie in August 1983, and the legendary venue has hosted renowned artists from U2 to Frank Sinatra, George Strait to Prince, Garth Brooks to Lionel Richie, Tina Turner to Lady Gaga, Ed Sheeran to Billy Joel, AC/DC to George Michael, Janet Jackson to Bruce Springsteen, and the list goes on.

Owned by the City of Tacoma, the Dome is the largest indoor arena in Washington attracting more than 600,000 people each year with its diverse lineup of events. It has been consistently recognised as one of the top venues in North America and worldwide based on concert attendance by leading industry publications like Pollstar and Billboard.

Upcoming events at the Dome include Justin Timberlake, November 12-13, with global hip-hop icons Nicki Minaj and Future having announced today that they’ll be hitting the road together for the first time on their NickiHndrxx tour, which will touch down at the Tacoma Dome, November 10.

The City of Tacoma enhances quality of life for the community and drives economic vitality through its premier venues and diverse entertainment opportunities. Tacoma Venues & Events manages these renowned venues, which include the Tacoma Dome, one of the world’s largest wood domed structures with flexible seating configurations ranging from 5,000-23,000; the Greater Tacoma Convention Center, artful and modern with its trademark glass walls and 119,000sqft of event space; Cheney Stadium, home of the Tacoma Rainiers; and the Broadway Center’s historic Pantages and Rialto Theaters, and Theatre on the Square. The department collaborates with Travel Tacoma and Tacoma South Sound Sports to generate events for the region.

About the renovation project

The iconic Tacoma Dome is getting over US$30m in renovations. The revitalisation will include:

This investment will improve the fan experience for all guests at the myriad of events presented at the Dome. The improved efficiency is also expected to increase the number of events and overall attendance.

As the renovation works get underway, which will see new seating being installed this summer, all renovations will be completed by October.

For more than 34 years, the legendary venue has hosted the world’s top touring artists and hundreds of community events, like state high school championships and graduations. With these improvements, the Tacoma Dome legacy will live on.