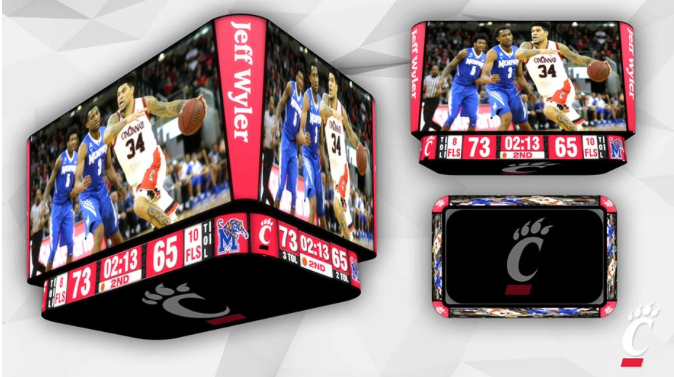 Fifth Third Arena, on campus at the University of Cincinnati in Ohio, is receiving a technology upgrade with 36 new LED displays from Daktronics (NASDAQ-DAKT) of Brookings, South Dakota.

The main focus of the tech upgrade at Fifth Third Arena – which forms a part of the the US$87m privately-funded renovation of the venue – will be the new nine-display centre-hung configuration featuring 3.9 million LEDs for nearly 2,000sqft of digital canvas suspended above the playing surface of the venue. In total, the upgrades will bring more than 7 million LEDs and 5,700sqft of displays to the arena.

The fan experience at the new Fifth Third Arena is paramount in our daily planning on this transformational project. The addition of the new state of the art videoboards, ribbon boards and corner displays are indicative of our robust commitment to a Class of the League experience for our phenomenal guests.

This project brings a large, unique centerhung configuration to Fifth Third Arena as the focal point of their facility upgrades. The project also features many other displays being installed including column wraps, auxiliary displays and ribbons to immerse fans in the action. These LED displays represent a significant upgrade to the University of Cincinnati’s facilities and we’re excited to be a part of it.

The new main displays are capable of variable content zoning, which allows each to show one large image or multiple different zones of content including live video, instant replays, up-to-the-minute statistics, graphics and sponsorship messages.

Along with the centre-hung display, fans attending events at Fifth Third Arena on campus at the University of Cincinnati (UC) – home of the Bearcats – will notice four additional 8.5ft high by 14.5ft wide, 6mm upper-level LED video displays, and four 9.5ft tall by 28ft wide, 10mm ring LED video boards on the four corner pillars of the facility.

Ribbon boards will surround the court on all four sides along the seating fascia. Each ribbon display will feature 15mm line spacing to provide supplemental information and graphics to the main display, as well as allowing the opportunity to highlight sponsors throughout events. At court level, 10 LED scorer’s tables and two stanchion displays mounted to each basket support provide additional visibility for statistics and sponsors. And outside the arena, a new marquee display will welcome fans to events.

All 36 displays can be controlled from one easy-to-use solution, Daktronics Show Control System, which provides a combination of display control software, world-class video processing, data integration and playback hardware that forms a user-friendly production solution.

Our control solution is capable of great things including layering and transitioning that can make your event production look like a broadcast-quality experience for your fans.

About the University of Cincinnati

The University of Cincinnati Bearcats compete at the highest level of intercollegiate athletics as a member of the American Athletic Conference.

UC fields 19 varsity teams with over 500 student-athletes supported by almost 200 full-time staff on the award-winning UC campus in Cincinnati, Ohio.

The Bearcats have won six national championships and 81 conference championships during its proud history. Numerous luminaries and Olympians have worn UC’s red and black through the years including hall of fame legends Sandy Koufax, Oscar Robertson and Jack Twyman.

The US$87m privately-funded renovation of Fifth Third Arena will see the new-look venue opening this autumn/Fall.

Upgrades to the Fan Experience at Fifth Third Arena

Upgrades to Student-Athlete and Campus Experience