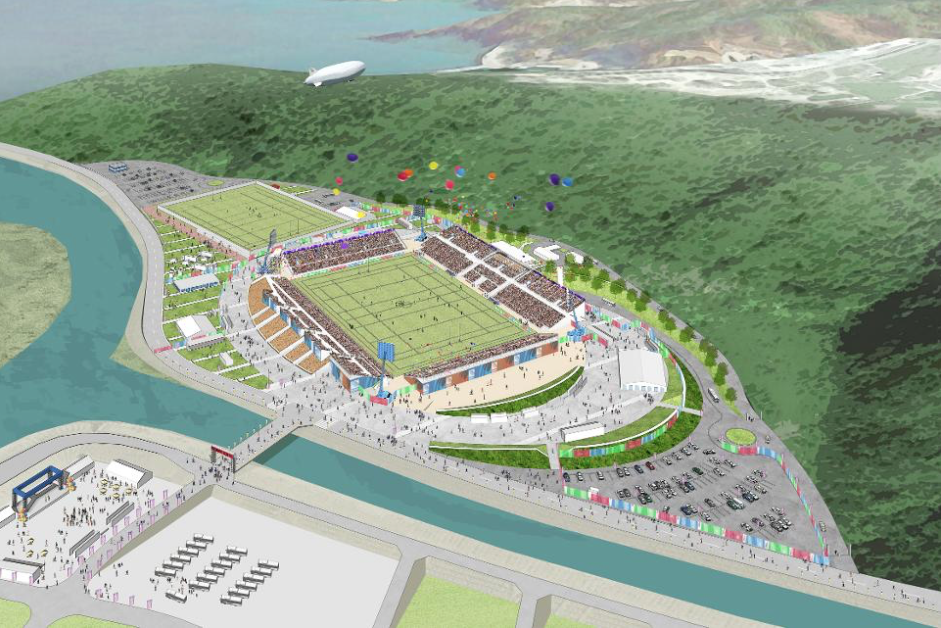 The newly built Japan Rugby World Cup 2019 venue, Kamaishi Recovery Memorial Stadium, in the Iwate Prefecture, will be officially inaugurated on August 19, 2018, with a memorial match between the Kamaishi Seawaves Rugby Football Club and top League side, Yamaha Jubilo.

The event will see the beginning of a new chapter in the remarkable story of Kamaishi, a city for which rugby plays such an important role; both in its history, and its future.

With two Rugby World Cup 2019 (RWC19) matches to be played at the stadium, the Rugby World Cup vision of “Connect, Create, Go Forward” holds special significance for the people of Kamaishi; the Great East Japan Earthquake of 2011 and the tsunami that followed brought considerable devastation and loss of life to Kamaishi and the surrounding area.

Players from the local rugby team, while initially focused on supporting the relief and recovery effort, were encouraged by the people of Kamaishi to return to the rugby pitch as quickly as possible to begin training for the upcoming season. Being a town so closely tied to its rugby team, rugby was recognised as an important way of helping to bring a sense of hope back to the people of the city.

On 5 June 2011, less than three months after the earthquake and tsunami, Kamaishi welcomed Yamaha Jubilo for its first match of the season. It is highly symbolic and with a great sense of pride that the people of Kamaishi and the Seawaves Rugby Football Club welcome Yamaha Jubilo back for this special memorial match to mark the opening of the new stadium.

Kamaishi has a long and successful rugby history. The previous local team, Nippon Steel won seven consecutive national championships between 1978 and 1984. To commemorate this great rugby history, the Seawaves will wear a special red jersey for this match, the same colour as the Nippon Steel jersey in honour of all players and supporters, past and present who have been a part of the Kamaishi rugby community.

Built on the former site of the local Elementary and Junior High Schools, construction of the stadium began in April 2017. The Kamaishi Recovery Memorial Stadium will be the only newly built facility of the twelve Rugby World Cup venues. Upon completion, it will have a permanent capacity for 6,000 spectators, with 10,000 additional temporary seats to be added for the Rugby World Cup 2019, bringing the total capacity of the stadium to 16,000 for the two tournament fixtures.

We are proud to play the opening match at this great stadium, completed with the support and vision of so many people. It’s an honour to welcome our friends from Yamaha Jubilo who were the first rugby team to come to Kamaishi to support us during the reconstruction effort following the earthquake and tsunami. This stadium remembers the past, honours the present and looks forward to the future.

The game on 19 August will be a great step forward in the ongoing recovery of Kamaishi and the lead up to our city hosting the Rugby World Cup in 2019.

We in Kamaishi take the Rugby World Cup vision of “Connect, Create, Go Forward” deeply into our hearts. As the only host city in the tsunami disaster-affected region, we want to “connect” with the world, “create” new infrastructure and opportunities for the region, and “go forward” to the future as we pass on the legacy of this great tournament to the next generation.

The opening of the Kamaishi Recovery Memorial Stadium will mark a very special moment on the journey to Rugby World Cup 2019. The stadium stands as a testament to the indomitable spirit of the people of Kamaishi and will act as a beacon of hope and inspiration for generations to come, providing an important legacy for the future of this region of Japan that has rugby at its heart.

The Rugby World Cup will bring four top international teams, thousands of fans and the attention of the world to the region next year and promises to be one of the highlights of the event. World Rugby will continue to work closely with the organising committee and the Iwate Prefecture to ensure that the venue is a success, both for the Rugby World Cup, and for the future of the region.