Fulham Football Club confirmed that its plans to redevelop the Riverside Stand at Craven Cottage have been approved following a planning hearing at London Borough of Hammersmith and Fulham on Tuesday 20 March 2018.

Consultations with supporters and local residents were held last October at two exhibitions at Craven Cottage. Following an in-depth, club-led consultation process, the Populous-designed stand was submitted to the Council in December 2017.

The Club’s previous Riverside Stand design received planning permission in 2013 and this enhanced scheme also incorporates the opening of the riverside walk from Putney to Hammersmith, an aspect of the approved design and a major benefit to the local area, in addition to improved facilities for users on both match and non-match days.

The new stand will increase the overall capacity of Craven Cottage and the main works are expected to commence in the summer of 2019, with a full timeline of scheduled works announced in due course.

Our goal for a brighter future for Fulham Football Club, the neighbourhood, our borough and all of London is now at our doorstep. Tonight’s news wouldn’t be possible if not for supporters and local residents who believed in our vision, so I hope they will join us in celebrating what will be a new and important chapter in the history of Fulham and Craven Cottage. While there are too many people to thank, no one who helped to play a role in this process to date will ever be forgotten.

We are all delighted with the outcome of the decision this evening. Craven Cottage has been the home of Fulham Football Club since 1896 and it’s fantastic news for our supporters, our local community and everyone associated with the Club.

Subject to fulfilling the necessary conditions, we are excited that plans to redevelop the Riverside Stand may proceed and improve facilities available throughout the year, helping to deliver our Chairman’s long-term vision of providing a world-class venue whilst safeguarding the Club’s future at Craven Cottage.

We are grateful for the support, ideas, energy and inspiration of our Chairman, Mr Shahid Khan, in improving the design and bringing it to this point. Thank you also to the Fulham Supporters’ Trust for their assistance and all the supporters and staff who have commented on, provided ideas for, and backed the scheme in addition to the great work by everyone involved with the project.

Fulham FC, in addition to the Fulham Supporters’ Trust and the wider local community, has been a fantastic group to work with, allowing Populous to design a new Riverside Stand that will be a great neighbour and an amazing place to watch football.

The new stand combines a spectacular viewpoint for Fulham fans with new experiences, including restaurants, cafés, bars and pop-ups that will make the most of Craven Cottage’s wonderful riverside location. 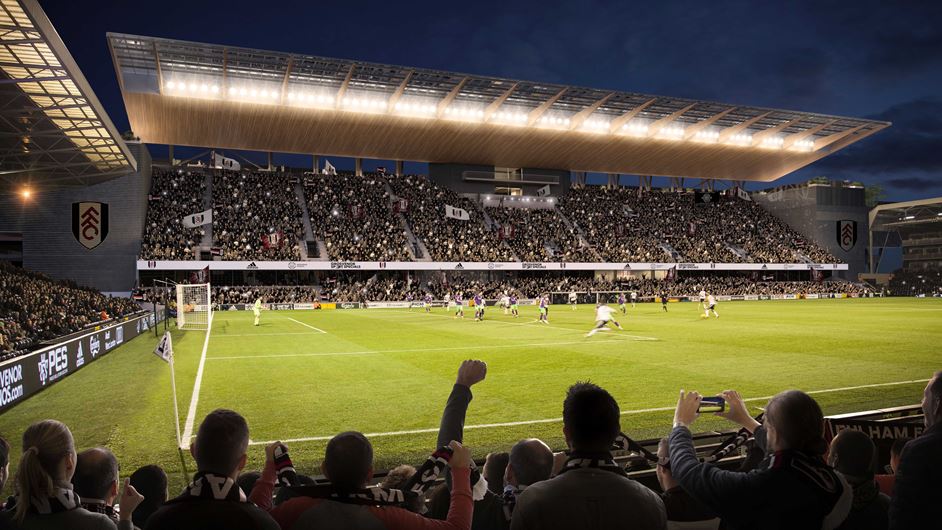 1. The redevelopment and expansion of the current Riverside Stand to increase its capacity from 4,689 to 8,650, increasing the overall capacity of Craven Cottage to c.29,600 seats

5. Basement to provide ‘back of house’ facilities, club and lounge area

8. Minor works to the rear of the Hammersmith Stand and reconfiguration of the west end of the Putney Stand

10. Works to the south-west corner of Bishops Park

11. Temporary construction of a platform in the River Thames and contractor’s compound in Bishops Park