With the completion of the Suite Level in 2016 and the Mezzanine Landings this past September, Wells Fargo Center has now transformed 82 Luxury Suites into brand new private event spaces and created two large open-concept areas.

On the heels of these major upgrades, the next chapter of renovations is focused on transforming the remainder of the Mezzanine Level, leaving not a single aspect of the original layout once work is complete. Highlights include:

Beyond the Mezzanine Level, upcoming phases of the redesign will include a state-of-the-art sound system with equipment and software that deliver improved range and sound clarity throughout the venue, brand new court and rink-side suites, and the transformation of the remaining Premium Seating areas. 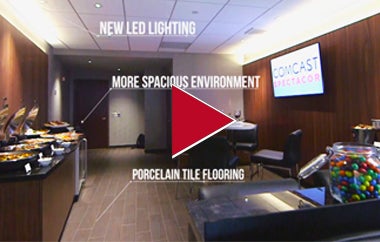 Click on the above to watch the Luxury Suite renovations video