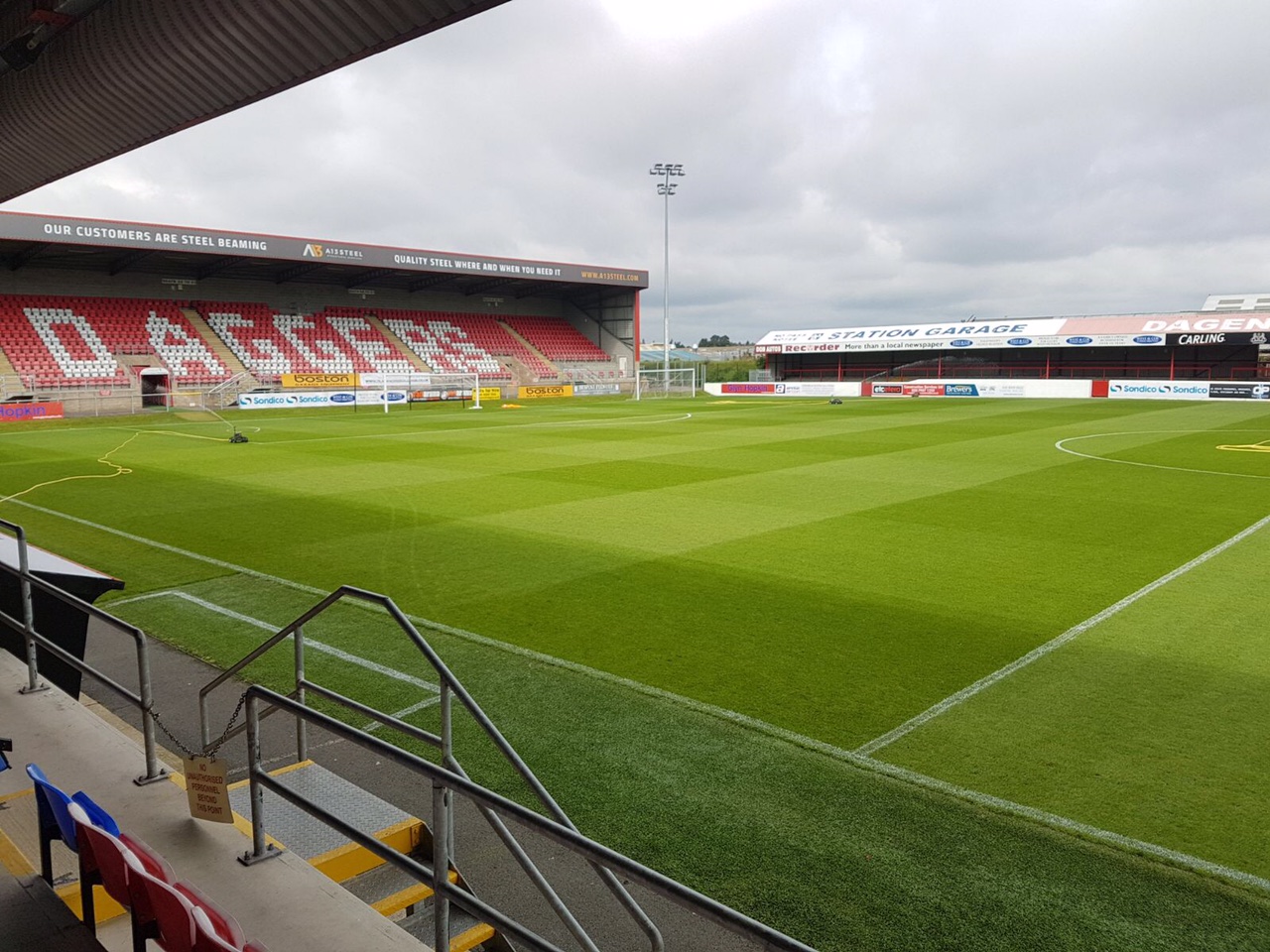 In this latest industry interview, conducted back in late December, SVB’s Katie McIntyre caught up with Jamie Honeyman, Head Groundsman at Vanarama National League side, Dagenham & Redbridge FC, and heard about the specific challenges when it comes to pitch management and maintenance at lower league clubs.

Jamie, you became Head Groundsman at EFL side Dagenham & Redbridge FC – your first HGM position – back in January 2017. With more than 12 months experience now under your belt, what would you say have been the main challenges you’ve faced?

The main challenge I face here at the Chigwell Construction Stadium, especially at this time of the year, is losing ground temperature. This is compounded as we also suffer from a lack of modern equipment. We don’t have the budgets like the big clubs, so we have to make do with what we have, and, if I’m totally honest, most of it has seen better days.

Another major challenge would come in terms of usage, as the stadium pitch is not only used by Dagenham & Redbridge’s players but also by West Ham’s U-23’s, who use it for their Premier League 2 fixtures, and obviously they, like our board, expect a good quality pitch, year-round, no matter the weather.

West Ham’s Head Groundsman, Dougie Robertson, makes regular site visits to the ground and advises if there are any issues, but the maintenance and upkeep is left to ourselves.

This really is a vocation, not a job, you have to love what you do, not least when you’re struggling with little or no budgets, but are still expected to deliver a top quality pitch.

Having started off at Hadlow College doing an NVQ Level 2 in Sports Turf, following my previous roles in greenkeeping, there have been some significant changes for me over the last 4-5 years. 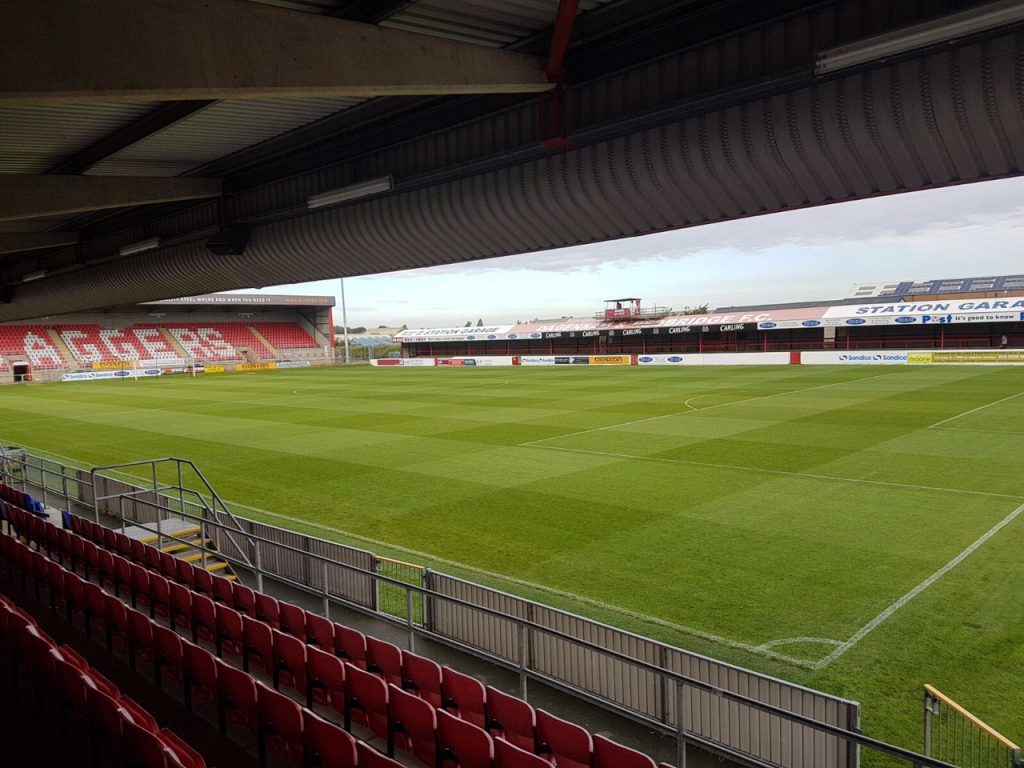 Chigwell Construction Stadium is used not only by Dagenham & Redbridge FC but also by West Ham United’s U-23’s, who use it for their Premier League 2 fixtures

Despite it being your first year with the club, you were a finalist for the 2017 Institute of Groundsmanship (IOG) industry awards. How important is it to be recognised by both your peers and such awards?

It was great for the Club and our board, and obviously myself, to get this kind of industry recognition. The IOG congratulated me on being a finalist and said I was a credit to the industry, which was a terrific achievement.

I learnt a lot as a trainee at Fulham FC, under Greg Bolton, Richard Haines and Rory Ferguson, as well as from Gary Williams at Bearsted Gold Club and Lee Sayers at Mid Kent Golf Course, who showed me how to cut straights lines when I was in greenkeeping there, all of which I’ve been able to bring to my role here at Dagenham & Redbridge, so I should also be thanking them for helping me to become a finalist for this award.

When it comes to Pitch Management and Maintenance, what are the key factors?

You need a flexible plan, first and foremost. And, you need to keep a close eye on the weather at all times, but especially if there’s a frost expected and you have a big game coming up.

We had a friendly just before Christmas, and we knew the temperature was going to drop, so we had the frost sheets ready and waiting to be deployed. Obviously, putting frost sheets down takes manpower – i.e. it takes a minimum of 3 men to put them down, 7-8 if it’s wet – which is something else you have to plan and budget for.

As a lower league club, we don’t have the benefit of stadium grow lights or undersoil heating, so a lot more planning and preparation is required.

I’ve definitely learnt a lot in my past roles, which have been both in football (soccer) and golf, as well as from my peers, especially while at Fulham’s Craven Cottage, where we had stadium grow lights and undersoil heating to keep the grass in perfect condition.

I’ve even taken nuggets of wisdom from fertiliser representatives. It’s all about knowledge-sharing and listening to what’s worked, and what hasn’t, for other Head Groundsmen.

What kinds of developments would you ideally like to see over the next 3-5 years?

Obviously, if the club were to go up a league, then we’d have bigger budgets, so that would be a huge benefit. With an increased budget, I would look to get a proper fertiliser programme in place, I’d also invest in stadium grow lights and definitely irrigation – maybe a Verti Drain or a new sprinkler system – as well as new frost sheets; ours have definitely seen better days!

A new tractor would be on my wish-list too.

On a personal level, I would make sure to get an NVQ Level 3 and spray licence, so we wouldn’t need to use contractors, I could do it all myself. 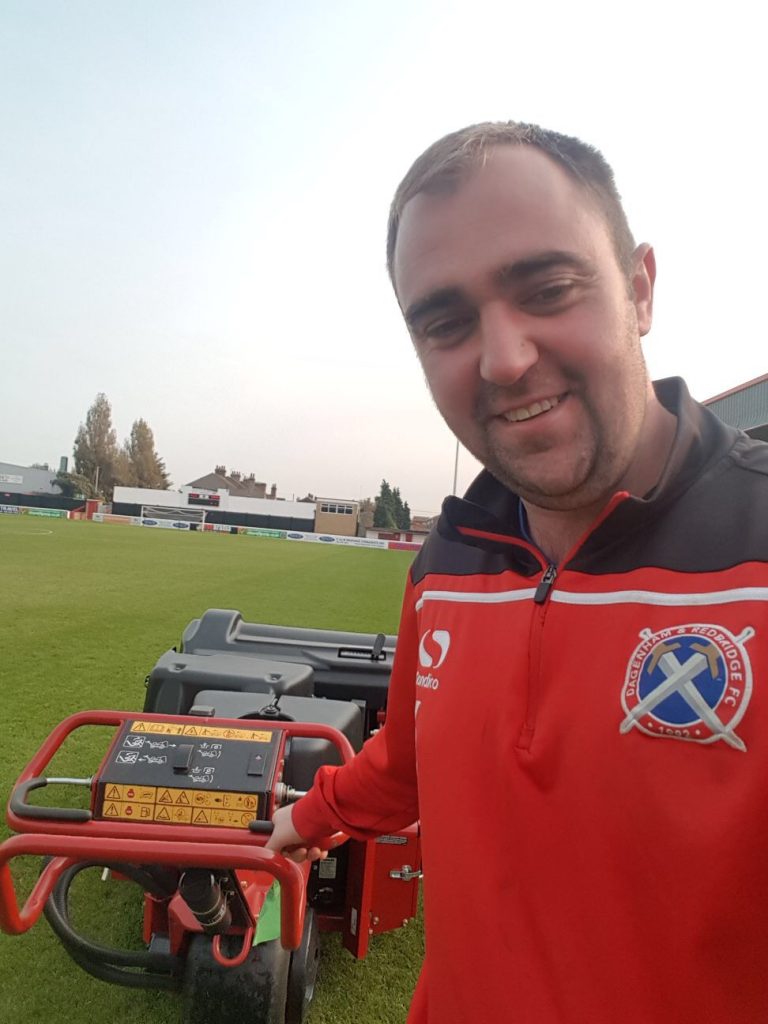 Thanks to Jamie Honeyman for taking the time to do this interview.