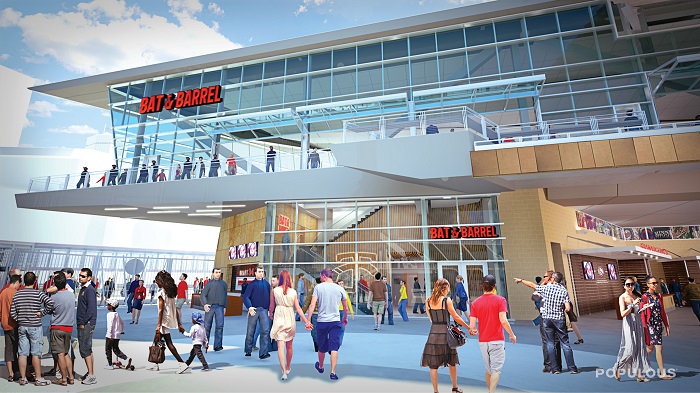 The Minnesota Twins recently announced right field enhancements to Target Field for 2018 to improve the fan experience, with renovations to include an expanded right field concourse featuring enhanced amenities and the new Bat & Barrel space, created in collaboration with Shea Inc., to replace the former Metropolitan Club.

The new Populous-designed right field enhancements to Target Field will provide Twins fans with a new way to take in the game in one of Major League Baseball’s most awarded ballparks.

A new signature stairwell and elevator connection to the main concourse will make Bat & Barrel more accessible to all Twins fans.

Below Bat & Barrel, the main concourse will be expanded by more than 1,300 square feet to ease congestion, as 60 percent of fans enter the ballpark through that concourse. A new drink rail viewing area and concessions will be added to the space, including the Drafts at 34 beer tap wall at the entry gate named for famed Twins player Kirby Puckett which will have 22 beers on tap.

Target Field’s right field enhancements will be ready by Opening Day on April 5, 2018, and will be a popular destination for Twins fans and a location for events, private functions and meetings year-round.

Designed by Populous and unveiled on opening day in 2010, Target Field was named Sports Facility of the Year by Street & Smith’s Sports Business Journal and ranked the Best stadium experience in all of professional sports in North America by ESPN the Magazine.