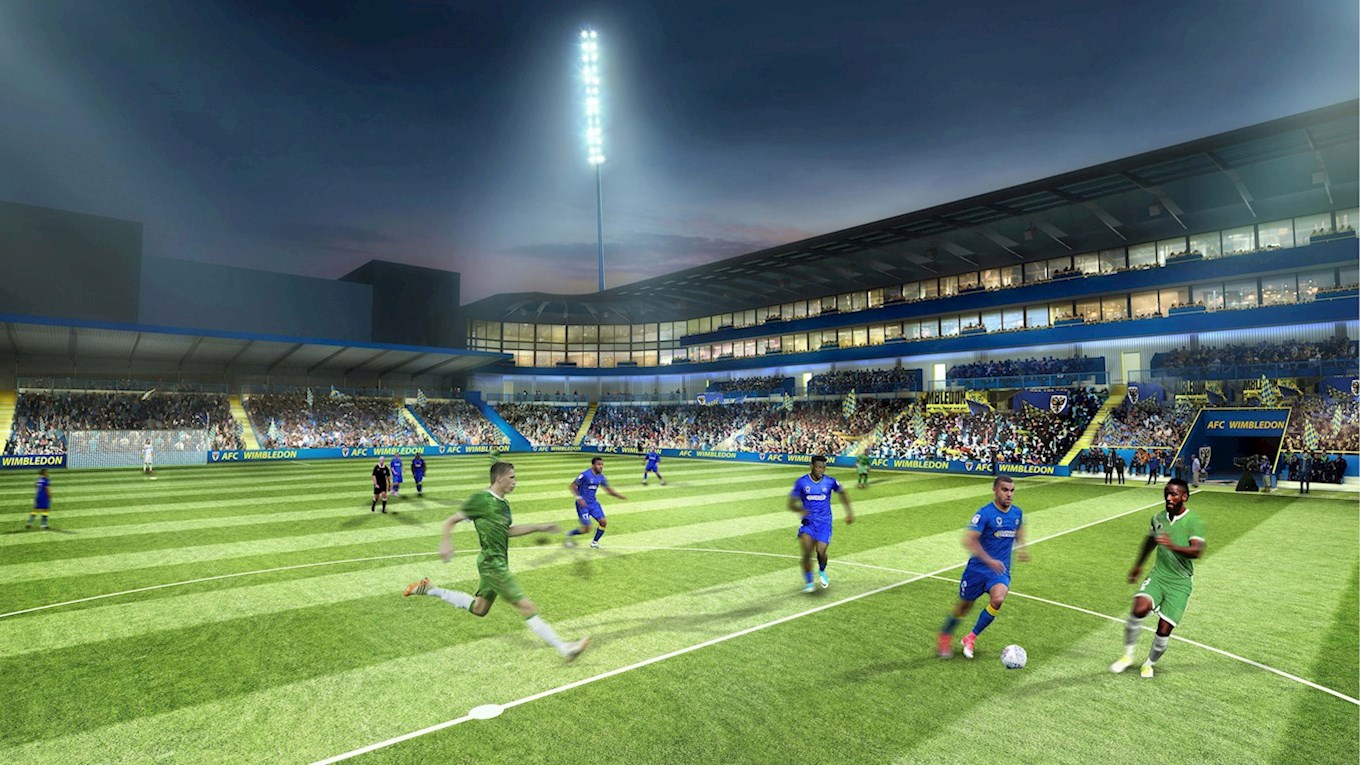 Representatives from EFL Sky Bet, League One side, AFC Wimbledon, Merton Council and GRA Acquisitions have signed a Section 106 agreement, which clears the way for a new stadium for the Club.

The new development at Plough Lane will bring to the borough an 11,000-20,000-seater football stadium, 602 much-needed new homes, retail space and a squash and fitness club.

Signing the Section 106 agreement, AFC Wimbledon and GRA Acquisitions Limited are committing to not only bringing a major new development and the associated economic benefits to this area of south west London, but they will also pump over GB£1.5m into local health provision and improvements to the local bus, road and cycle network. The development will bring construction jobs to the area, as well as longer-term employment once the stadium, shops and fitness club are up and running.

Everyone in football knows the story of how AFC Wimbledon came into being. A group of fans started with nothing; no ground, no team, no manager, no players and no kit. Now, fifteen years later, we’ve taken a giant step towards going home to Merton, in a new stadium and as a Football League club.

This is a momentous day for us. Everybody who has helped the Club to reach this point must be very proud. On a personal note, I want to say a particular thank you to Andrew Williams, our Project Manager, and Partner Daniel Norris of law firm Hogan Lovells, who did all the hard work in the background. I and the Club are massively indebted to them.

A lot of my early football memories are connected to Plough Lane and it is exciting news to hear that the Club will finally be able to start work on building a new stadium back there. As a trainee, I remember having to paint the physio’s room at Plough Lane, training in the car park from the age of 11, and signing my first professional contract on the pitch. To lead the team out back at our spiritual home would be a huge privilege.

After a long journey, this is a proud moment and a historic moment for Merton. Our experienced planning officers have spent a great deal of time and effort to ensure this exciting development will benefit both the greatly loved club AFC Wimbledon, as well as Merton and the many families and fans who live here.

It has been a pleasure working with the Club since we granted the planning permission in 2015. I look forward to seeing the stadium and housing become a reality over the coming months and can’t wait to see the first game. Welcome home AFC Wimbledon.

Image: The picture above shows the latest impression of what the stadium may look like. Courtesy: AFC Wimbledon

About the Stadium Project

Established in 1870, Andrew Scott Ltd has a long history of building community facilities and sports stadia in the UK, including Cardiff Arms Park back in the 1960s. In more recent times, Andrew Scott has built Parc y Scarlets, home of Llanelli Scarlets, and substantial developments at Hampshire CCC’s The Rose Bowl and Stoke City’s stadium.

The appointment followed a lengthy and thorough process conducted by the club.

Industry stalwart, Andrew Williams, is the Club’s Project Manager for the stadium development.