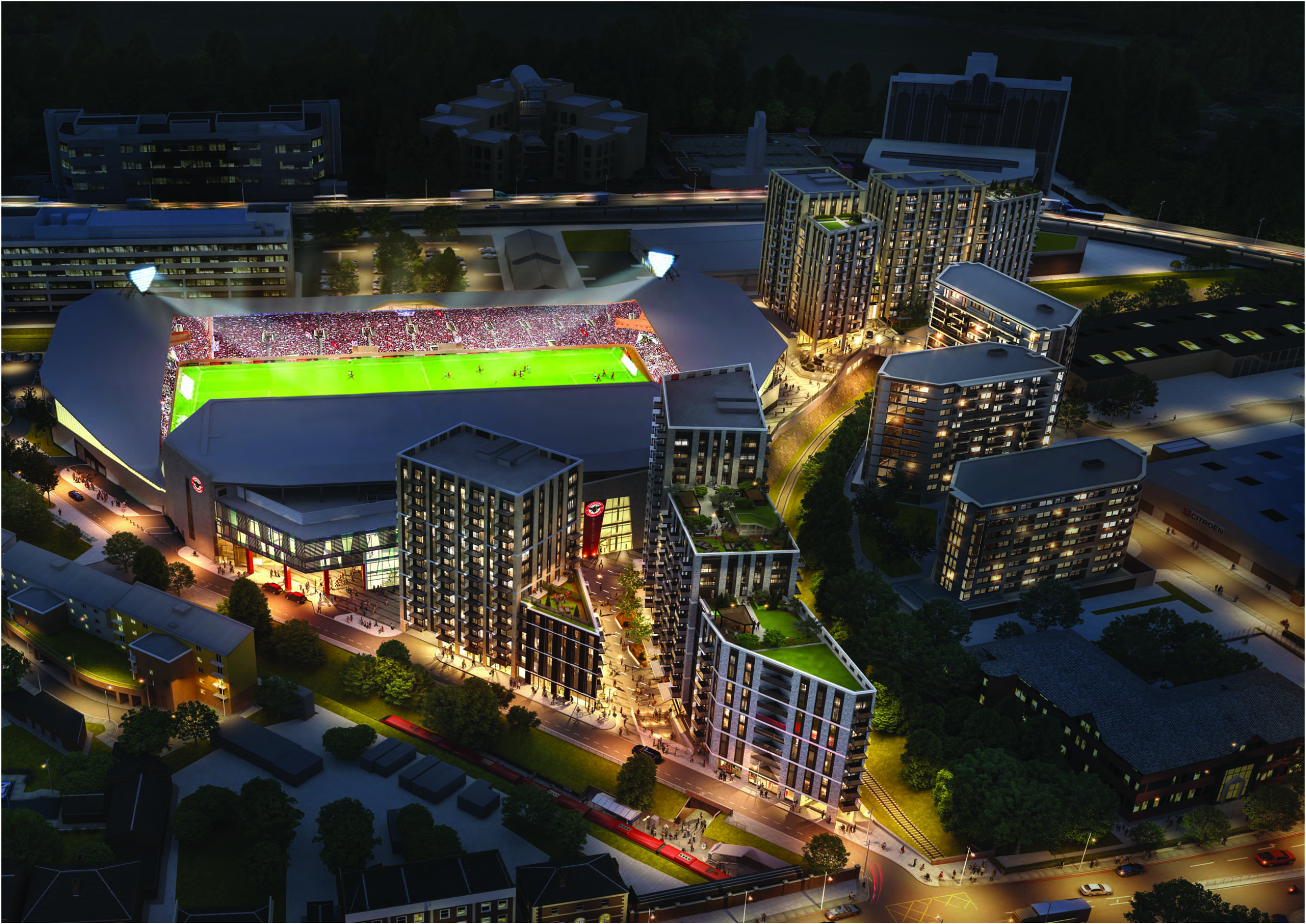 The amendments were submitted to LBH in September 2017 by Lionel Road Developments Ltd and Kew Bridge Gate Developments LLP on behalf of Brentford Football Club and its development partner Be Living Ltd, and comprise changes to the stadium design and the Central Eastern and Central Southern residential sites.
The stadium design adjustments focus on operational efficiency with upgrades to the broadcast, lighting and media facilities to meet modern English Premier League (EPL) football and Premiership rugby standards. There are also refinements to the number and mix of seats, together with changes aimed at de-risking the construction process by making the stadium more compact and increasing accessibility with the insertion of a new road along the northern perimeter of the site.
The entrance to the stadium has also been enhanced to include a public square with commercial outlets, while the Brentford Football Club Community Sports Trust offices are now to be located in purpose-built facilities alongside the new Brentford Community Stadium.
The first phase of the residential element of the scheme has been redesigned to fit better within the local context and the 487 new homes are a mixture of apartments to rent and buy designed to meet the housing needs of the local area.
Brentford FC and Be will now proceed to discharge a number of outstanding planning conditions and seek agreement to any revisions needed to the Section 106 Agreement outlining their obligations to LBH for this development. The GLA has indicated that the scale of the amendments proposed are such that the Mayor of London will not need to review this decision.
Cliff Crown, Chairman of Brentford FC, commented:

This decision by Hounslow Council is a great early Christmas present for fans. We now hope to be in a position to begin stadium construction in February 2018, following completion of a revised agreement with LBH on our obligations and will share more details with fans on the stadium build phase early in the New Year.

Securing Hounslow Council’s support for the planning amendments takes us a step closer to delivering the Brentford Community Stadium development. We’re all very excited to be part of creating a vibrant new community that hopefully acts as a catalyst for positive regeneration in the local area.

We are delighted that the Council has resolved to approve these last planning amendments that greatly improve the robustness and quality of the stadium and the enabling residential development. I would like to thank the London Borough of Hounslow and its Councillors as well as our entire team of engineers, architects and advisers for their hard work and support to date in helping us to get to this stage. We now look forward to getting on with the job of delivering this exciting project.

NB: We will be bringing you an in-depth interview with Kurt Pittman, Director – Ticketing, Marketing & Insight at Brentford FC in the coming weeks, so watch this space!