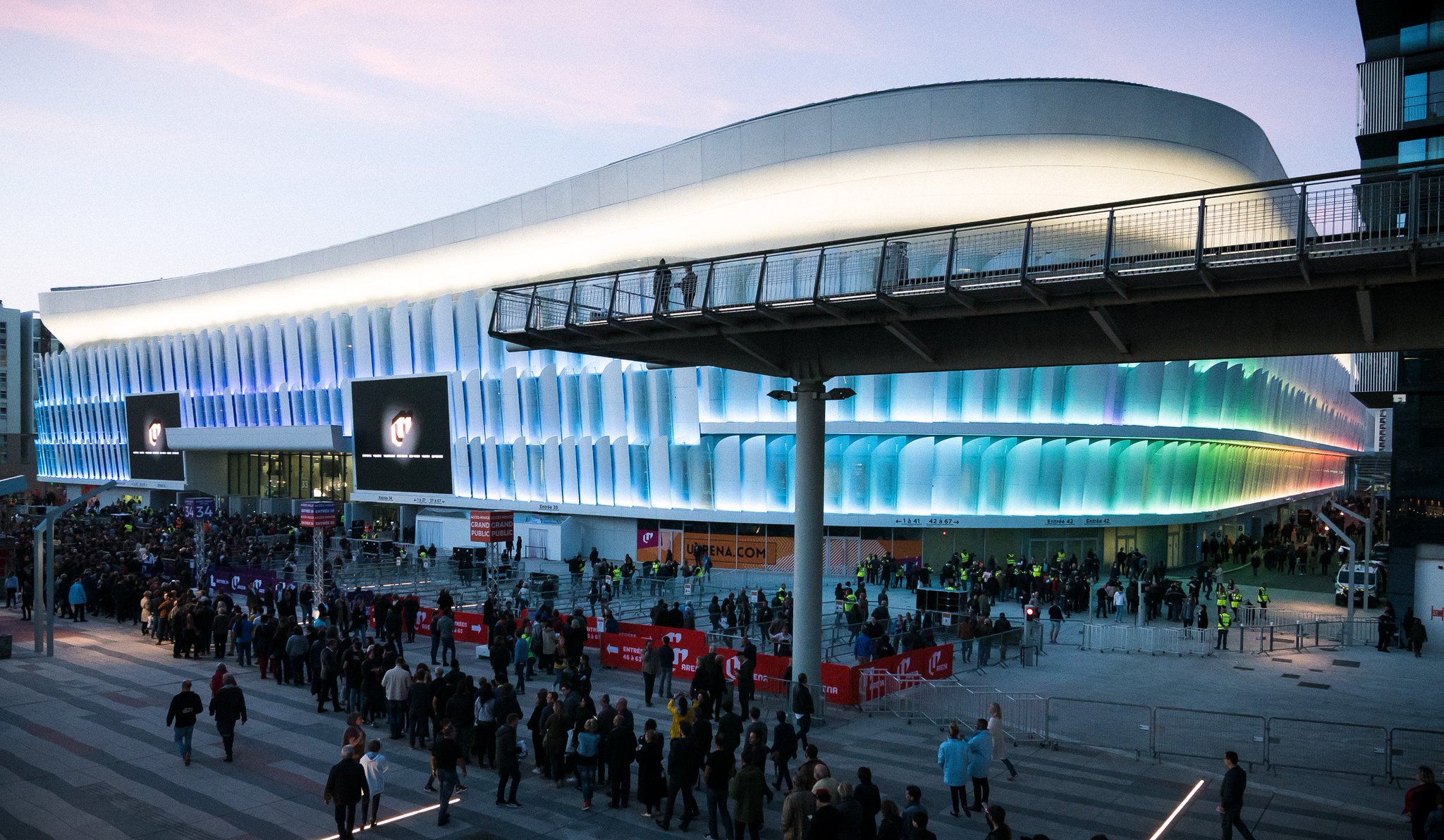 U Arena is the iconic new facility built by Racing 92 in the heart of the ‘French Manhattan’. Located in the La Défense area, to the west of Paris, the doors to this breath-taking venue opened on October 19, 2017, to the familiar strains of legendary rockers, the Rolling Stones. 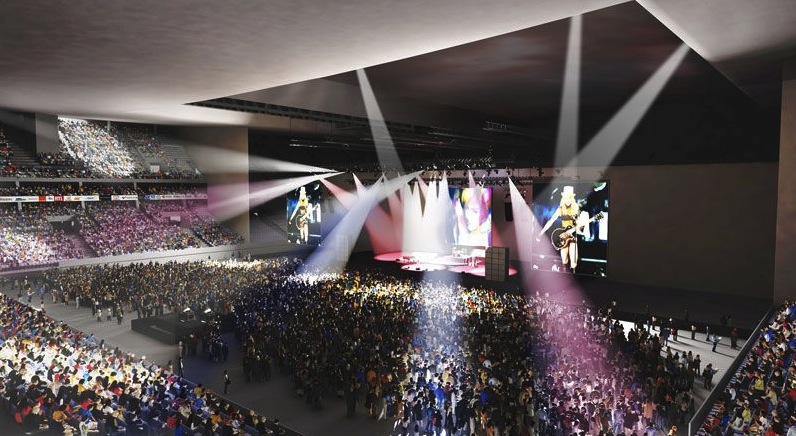 This unique facility has transformed the way a sporting venue considers its operations. As the Rugby Union season is relatively short, the best way to finance a spectacular facility like this was to ‘flip’ the thought process.

Accordingly, U Arena has been designed primarily to host a multitude of events, from concerts and conventions, to live performances, with rugby matches supplementing the continuous use. This approach allows for the generation of considerable and regular additional revenue streams.

The Arena is also extremely flexible, being able to accommodate audiences of 10,000 to 40,000 for all types of activities.

This new concept started to evolve over five years ago, with the Client, Racing Arena, committing the necessary resources to undertake significant due diligence, to achieve their goal of ensuring they utilised the very best materials and products possible.

As an indoor facility, it was clear U Arena would need to have artificial turf and imperatively, a cover system that would not only protect the quality artificial grass, but also be strong enough to withstand the extreme rigours of the production trucks, forklifts, cranes, and hundreds of tons of equipment required for their intensive calendar of events plus, of course, thousands of people.

In addition, the cover system would need to be in place continuously for months at a time, as it would only be taken up for rugby matches, and replaced as soon as the game was over. Protecting the Tarkett Sports playing surface for Racing 92 was therefore absolutely imperative, and so it was decided that the Club’s due diligence needed to include intensive testing of various cover systems on top of the chosen artificial turf.

The responsibility of determining the best turf protection products for Racing 92’s exacting requirements was given to the French Government-owned organisation, Institute for Science and Technology for Transport (IFSTTAR), based in Nantes, France, who have a rig designed specifically for accelerated testing to simulate many years of high intensity use condensed into a short period.

Accordingly, IFSTTAR requested samples from a number of the turf protection market’s top providers including Terraplas’ terratrak plus®. 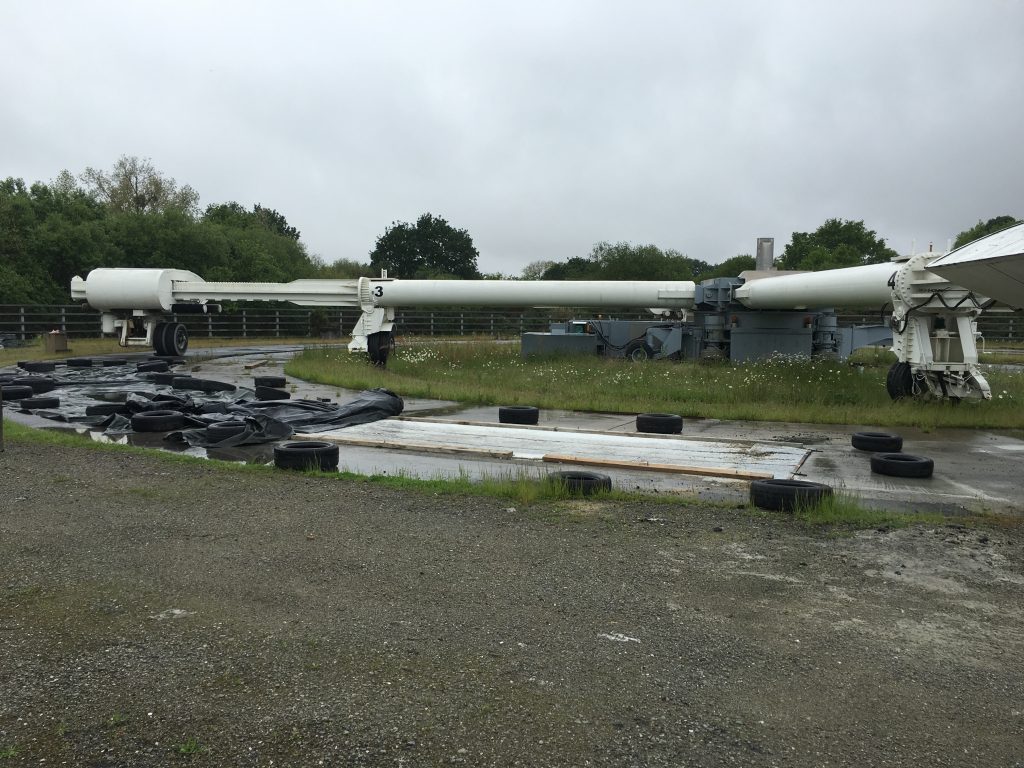 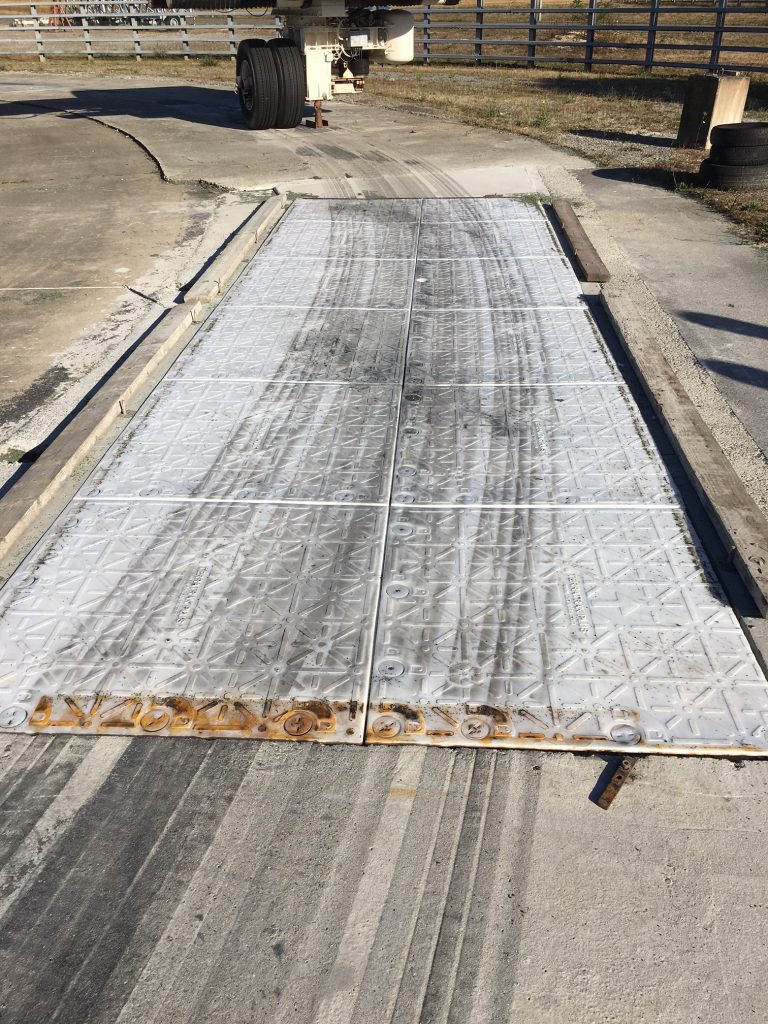 terratrak plus before lifting: This photograph shows terratrak plus® at the end of the overall test cycle. It can clearly be seen that, apart from the tyre marks, there is absolutely no damage to, or distortion of, the tiles whatsoever. All of the camlocks and joining pins are intact and the tiles have not moved

In September 2016, the results were presented to the Stakeholders of U Arena, which identified an overwhelming winner: terratrak plus®; and thus, Racing 92’s product selection was determined.

As the terratrak plus® will only be used on top of artificial turf at the U Arena, it does not need to be translucent (as is the case with natural grass pitches, where light rays must be able to filter through to ensure a healthy grass plant), so the next big decision was ‘colour’. Numerous samples were made in various shades of grey and sent for evaluation. Then, Terraplas Production Manager, Steve Reszke, had a great idea: “Why don’t we make it in metallic grey?”

New samples were made, and everyone agreed that this was a superb option. Added to this, as the ‘icing on the cake’, Terraplas agreed to emboss the U Arena’s corporate logo on top of the tiles. This attention to detail created an appropriately distinctive quality for this prestigious venue, as was demonstrated at its first fit in early October 2017.

This image shows the metallic grey top of the tiles, with the U Arena logo embossed into them 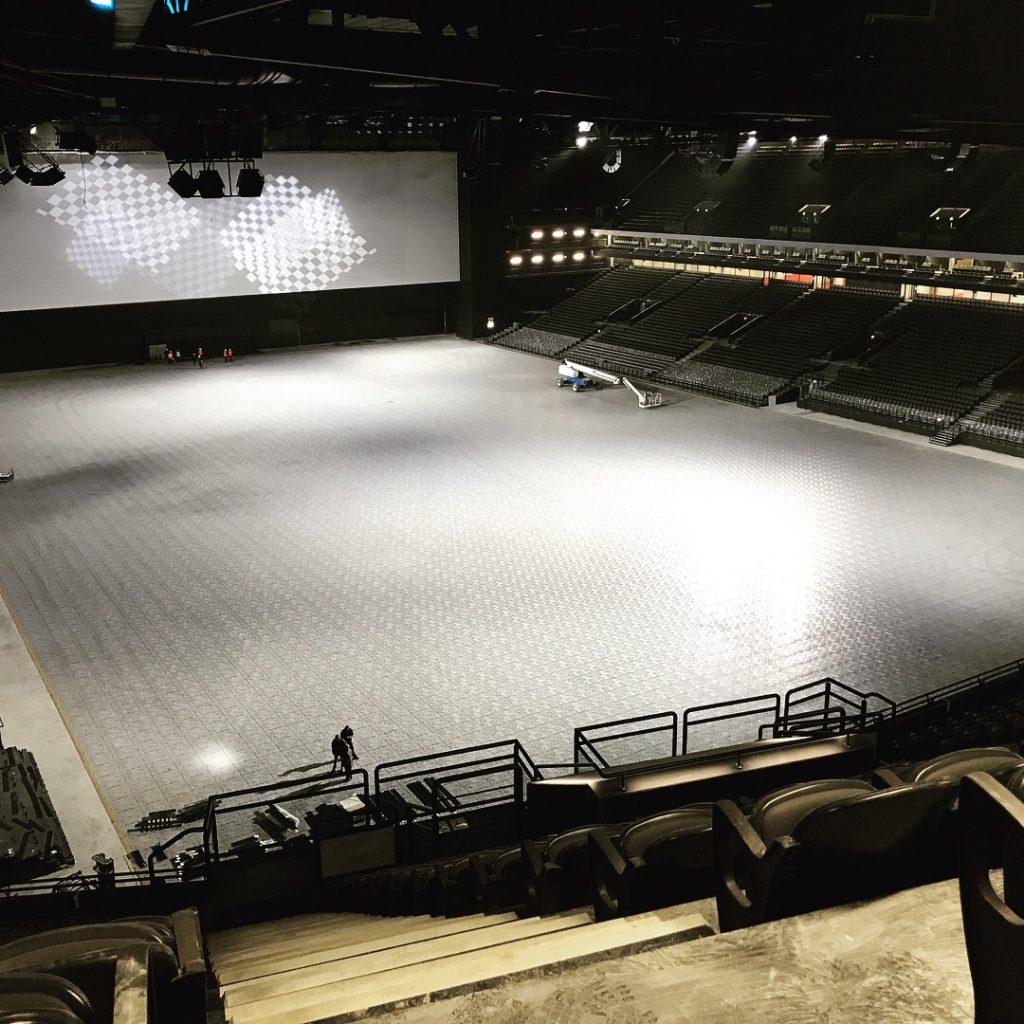 The first fitting of the terratrak plus, ready for the Rolling Stones

U Arena joins Stade de France, Stade des Alpes and Stade de Lille as French connoisseurs of the very best turf protection systems available in the world today! This exciting project was coordinated via Terraplas’ French Distributor, FSAE, headed up by Eric Freville, who was also instrumental in negotiating the aforementioned contracts.

As is common with all Terraplas clients, the vital first fit and training programme was supervised by the company’s own in-house expert, Steve Tingley, who was previously Head Groundsman at Wembley Stadium.

NB: A version of this article appears in the latest issue of PanStadia & Arena Management magazine: http://flickread.com/edition/html/5a2667ac1bbc5#130

U Arena offers an optimised space for the biggest international shows in a unique atmosphere. It has been designed to revolutionise the sports and entertainment experience, with its ultra-modern infrastructure and entertainment systems offering a platform designed to multiply and magnify the emotions that will be lived by the arena’s spectators and fans.

Located in the heart of Paris’ La Défense business district, U Arena is the largest and most innovative performance venue ever built in Europe. Designed by architect Christian de Portzamparc, the arena offers a multi-functional, modular space with a capacity that can be optimised to welcome anywhere from 10,000 to 40,000 spectators.

The space can be reconfigured to serve live concerts, corporate and special events, as well as a host of local and international sporting events, including those of resident rugby club, Racing 92.

This exceptional platform, which has already been announced as an official venue for the Paris 2024 Summer Olympics, was inaugurated October 19 by rock legends, the Rolling Stones.

Racing 92 will take to the field for their first game on December 23, when they will meet Toulouse in a Top 14 fixture. 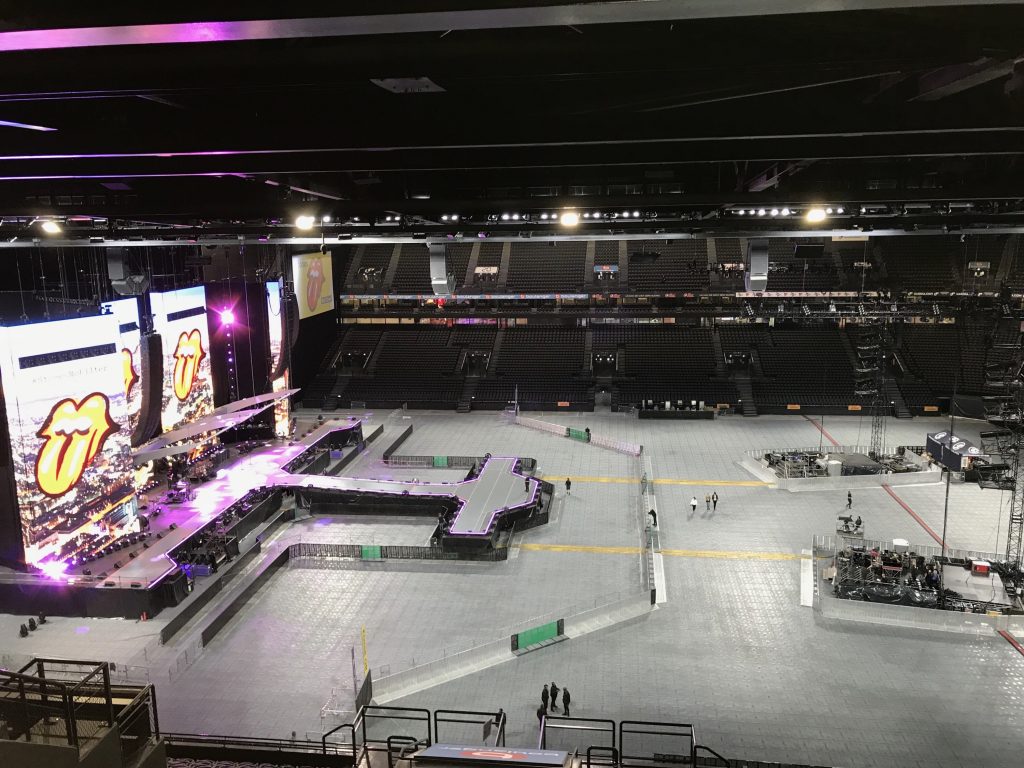 Lighting: Light it be