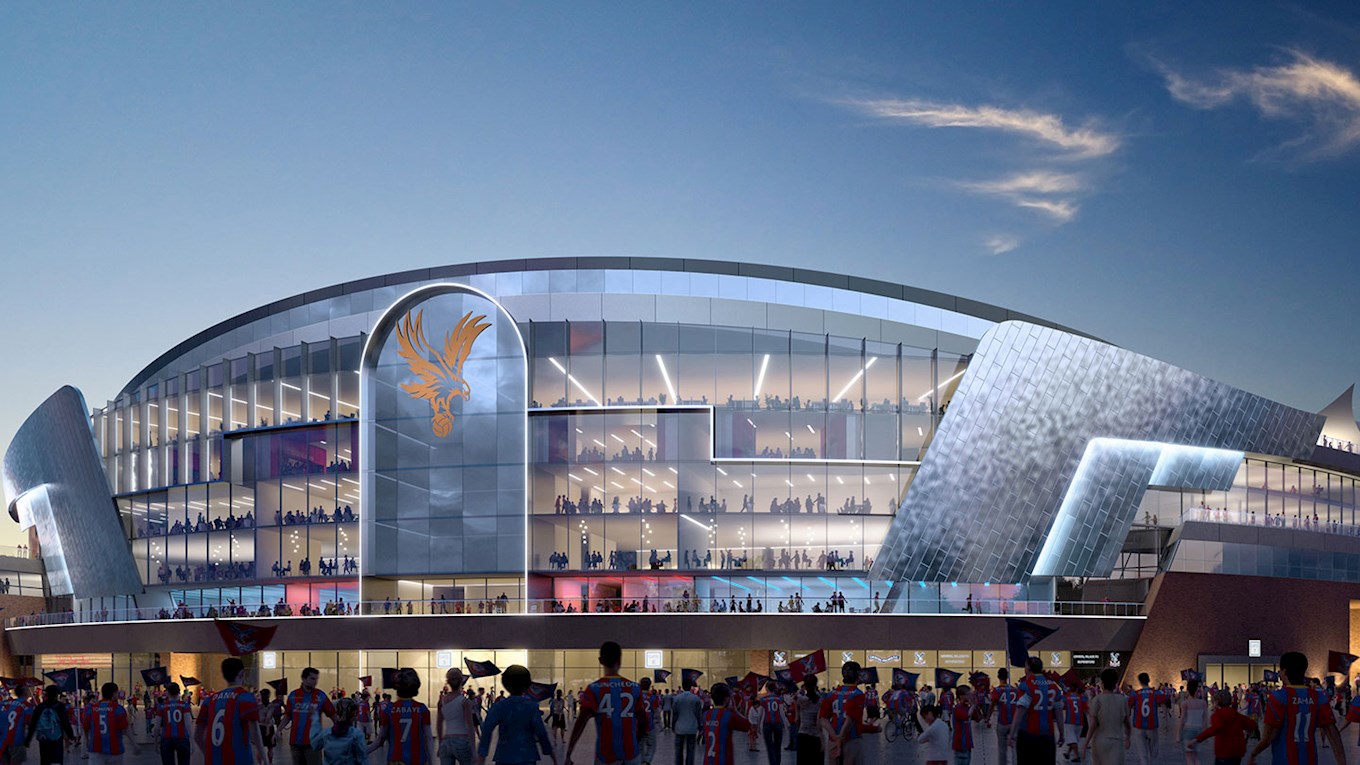 Parish addressed the media at a press conference to confirm the club’s plans for Selhurst Park, featuring a new Crystal Palace for a new era.

The project, which is expected to cost between GB£75m and £100m, will increase the capacity at Selhurst Park from 26,000 to more than 34,000, overhauling a stadium which has been the club’s home since 1924. It will transform the match-day experience for supporters and provide new facilities for the community, while retaining the ground’s uniquely passionate English Premier League (EPL) atmosphere.

The centrepiece of the redevelopment is a stunning new five-storey stand featuring an all-glass front – a homage to the club’s earliest days when it stood in the shadows of the original Crystal Palace, erected on Sydenham Hill. A central vaulted arch, with the famous Eagle crest, is a reminder of the iconic 1851 Exhibition Hall, and eagle wings flank the 41-metre structure.

The project is being designed by leading stadium architecture firm, KSS, which is also the design practice behind the redevelopments of iconic sporting venues, including Liverpool FC’s Anfield Stadium, The RFU’s Twickenham Stadium and No.1 Court at Wimbledon, in addition to the recently opened One Twenty club within Club Wembley, the “jewel in Wembley Stadium’s crown”. The roof of the new stand will be designed to funnel sound down to the pitch and the Arthur Wait Stand opposite.

Plans will be submitted to Croydon Council in January and, subject to planning permission being granted, work would begin in the next 12 months. The project is likely to take up to three years to complete. The existing Main Stand will remain in full operational use throughout the build process, minimising the impact on the stadium capacity in the coming seasons.

Key features of the redevelopment include:

The inspiration for the project is the club’s rich heritage and its roots in South London. The original Crystal Palace – a huge glass house built on a cast-iron frame and considered an architectural marvel – was moved to Sydenham Hill in 1854, after being showcased in Hyde Park for the Great Exhibition of 1851. When the club was founded in 1905 it played its matches inside the historic Palace grounds, which hosted early FA Cup Finals.

We need a stadium that reflects who we are, how far we have come and where we want to go – a stadium that South London can be proud of, a home worthy of our incredible support and unique atmosphere and this great Premier League we represent.

We have worked long and hard and looked at several options over the years, including returning to the original site of Crystal Palace, which wasn’t viable. While we can’t go back to it, we can build a new one and today I am proud, in conjunction with our partners KSS, to introduce a new Selhurst Park with a new Crystal Palace for a new era.

We are creating a new home worthy of our Club, our supporters and our community, and a celebration of our 112 years in South London.

Our brief was to create an impressive sense of arrival and an experience the fans can be proud of, retaining the special atmosphere at one of the best grounds in the country.

It’s already one of the best places to watch football and we certainly don’t want to ruin that, it has to be driven by the fan experience. There’s going to be a great relationship between the new stand and the Arthur Wait stand, which is going to work fantastically. It’s a very exciting project and we are privileged to be working on it with Crystal Palace.

The club is collaborating with Croydon Council on relevant issues. It will be working with the local community, businesses and other interests, holding a series of local events to show plans and invite feedback. A formal planning application is due to be launched by the end of January 2018.

Watch the video of the press conference where the project was first unveiled online at: https://youtu.be/AUnWAL-ty4U