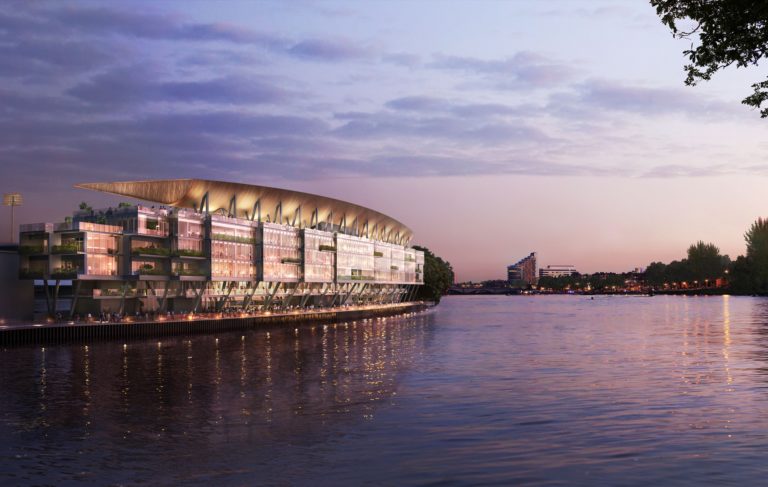 Fulham Football Club (FFC) has submitted an application to the London Borough of Hammersmith and Fulham council for the redevelopment of the Riverside Stand at its historic Craven Cottage home.

This application follows a period of consultation and open dialogue with residents, supporters, and many stakeholders with an interest in the project and local area.

FFC secured planning permission for its previous design in 2013. The new proposal, commissioned by Fulham FC’s Chairman Mr Shahid Khan, has incorporated a modern design that is sympathetic with the river and local area and best reflects the needs of the Club, community and neighbourhood by delivering a wide range of benefits both now and for future generations.

View from the Riverwalk on Match Day. Courtesy: FFC

In addition to increasing the seating capacity at Craven Cottage, the Club has sought to add amenities to help transform the riverside walkway into a world-class leisure destination, both on matchdays and non-matchdays.

This new design, by world-renowned architectural practice, Populous, will still allow the River Thames walkway to be opened up, an aspect of the approved design in 2013, and will incorporate bars, restaurants, and lounges—all of which will be open for business throughout the year.

The redevelopment will bring significant investments in the local community, adding new full-time jobs and further opportunities for employment.

Everyone here at Fulham Football Club is incredibly excited to submit this application, and we are confident that the plans we have laid out will both upgrade the current stand and add new facilities that everyone in the community will be able to enjoy and appreciate.

We are delighted to be working so closely with Fulham FC to design a building that provides a great home for the team, and a great neighbour for our local community, all through the year. It’s a real privilege to work on such an authentic, world-famous football ground, and at the same time bring to life such an incredible riverside location in London.