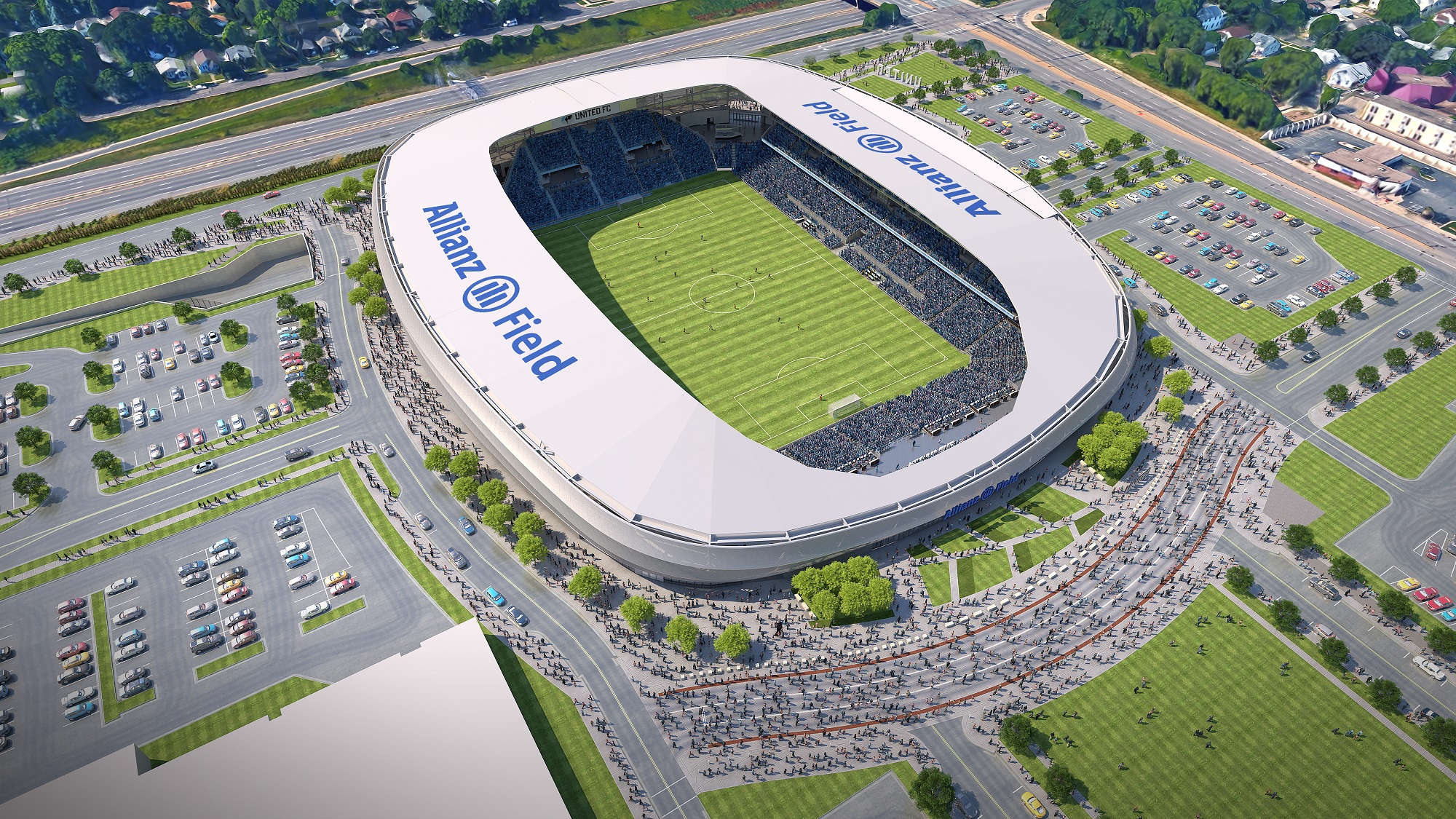 The arrival of structural steel marks a major milestone in the construction process for Allianz Field and on Monday, November 20, 50 tons of structural steel columns and beams arrived at the future home of Major League Soccer (MLS) side, Minnesota United FC (MNUFC).

The steel was fabricated by Merrill Iron & Steel, from Schofield, Wisconsin, and will be erected on site by Danny’s Construction Company, who are headquartered out of Shakopee, Minnesota.

This first structural steel consists of columns and beams, including the ceremonial first column, which was signed and placed during the ceremony. It also includes 90 round tube columns that will make up the stadium’s structure along with over 40 wide flange columns.

MNUFC marked the signing and placing of the first column at Allianz Field November 21, 2017

The 440 tons of driver tube material were manufactured by Atlas Steel in Chicago, Illinois, which Merrill is fabricating at their Schofield plant. This will ultimately be crafted into the 219 pieces that will make up the driver tube system that holds the PTFE (polytetrafluoroethylene) fabric enclosure. The PTFE screen will wrap around the top part of the structure.

The 1,500 tons of steel will make up the canopy roof system, which will be composed of trusses shipped to the job site in one piece. These giant components will be up to 22ft wide and will require police escorts and night-time delivery due to their size.

It’s not just another soccer team or a club. We’ve talked about the Twin Cities, all of us, for years, about being a great community, a great city, and the international community. This is another tangible piece. And particularly when Allianz said we want our name on this stadium, with this team, and this community. Of all the places in America they could have picked, they picked this one.

The site is certainly starting to take shape and heading inside, where the concrete had already been poured on the south end of the stadium’s footprint, the crowd could see the pipes that would one day run into the showers in the locker room and also stand under what will eventually be the safe-standing supporters section. That section will be crafted from a single piece of aluminum that will reverberate — loudly — when the fans stomp on it.

Allianz Field, Minnesota United’s privately-financed, soccer-specific stadium, which began construction in June 2017, will have capacity for 19,400, including 2,800 supporters in the safe-standing area. The world-class stadium will feature a 115 x 75-yard natural-grass playing surface, with the farthest fan seated just 125ft from the pitch.

Allianz Field is set to open in the spring of 2019. 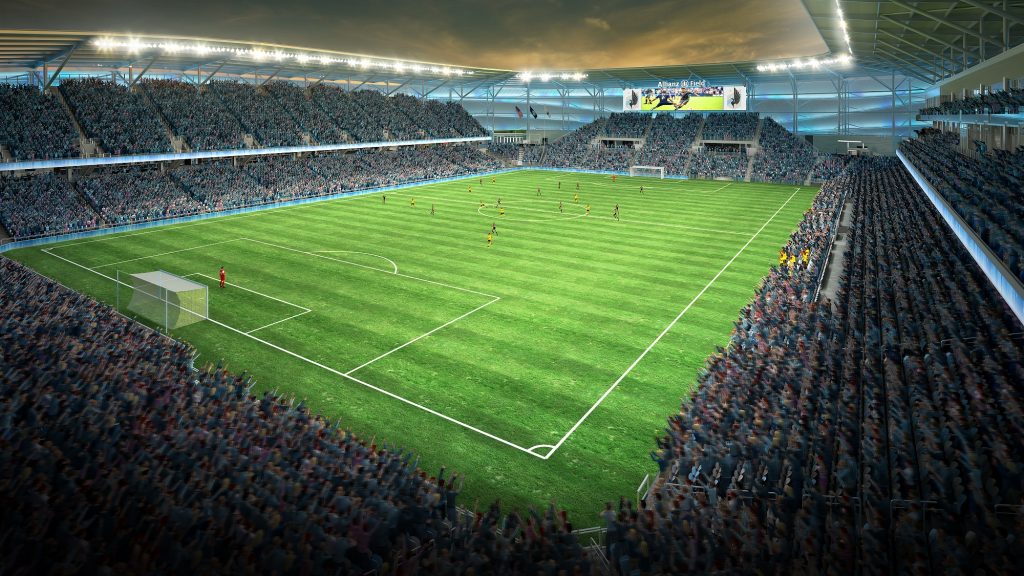 Open opening, Allianz Field will have a capacity for 19,400 with the ability to expand to nearly 25,000 in the future. The stadium will have a translucent PTFE laminate mesh skin and will feature LED lighting technology similar to Allianz Arena in Munich, which allows the stadium to change colours in response to different events and activities.

The stadium will feature modern amenities and advanced technology, and is specifically designed to positively address sustainability, while minimising environmental impact and energy usage. Allianz Field is designed by Kansas City-based architectural practice, Populous, a world leader in stadium architecture, with construction by Minneapolis-based Mortenson Construction, one of the leading construction firms in the United States.

The club’s ownership group will finance the estimated US$200m stadium, which will be given to the city of St. Paul once construction is complete. 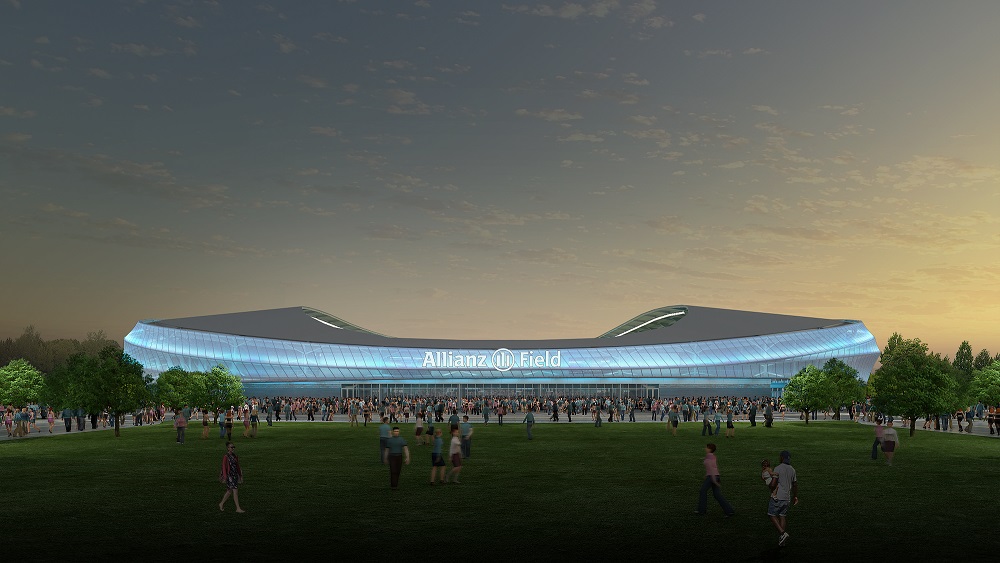 The stadium is a fitting complement to the great venues throughout the world that carry the Allianz name — iconic stadiums in Munich, Germany; Turin, Italy; Nice, France; London, England; Vienna, Austria; Sao Paulo, Brazil; and Sydney, Australia. Allianz also partners with a diverse array of sports teams, including two of the most successful clubs in global soccer — FC Bayern München (since 2000) and FC Barcelona (since 2010). These partnerships are focused on community and business relevance as Allianz strives to forge relationships with partners who share common values and commitments.