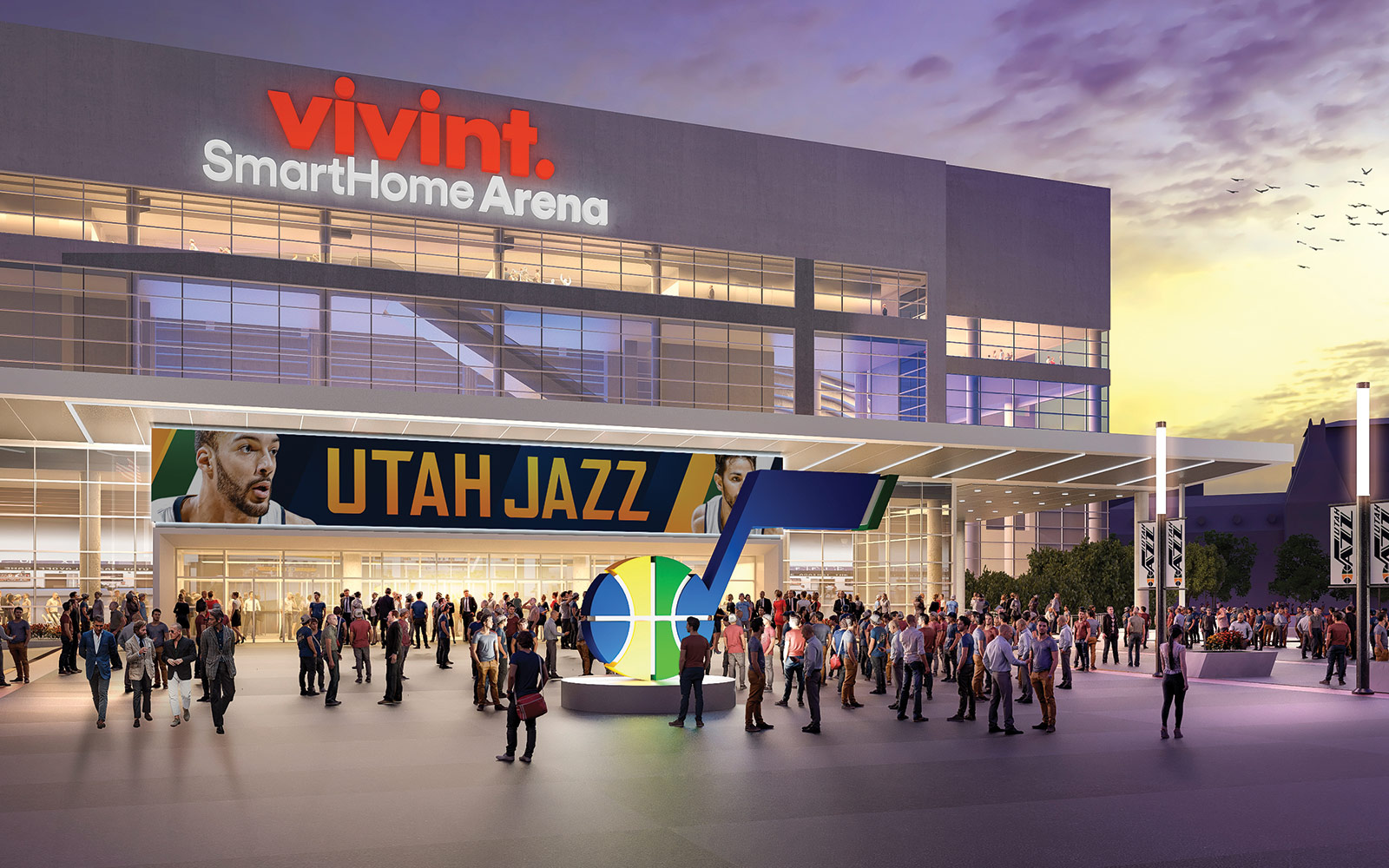 After more than 25 years as the premier sports and entertainment venue in Salt Lake City, a new era at Vivint Smart Home Arena began with the Miller family first unveiling an iconic Utah Jazz statue on the plaza, before holding a public open house to showcase the recently completed US$125m renovation that will ensure an unbeatable guest experience. All the more impressive is the fact that all of this was delivered in just 128 days!

An illuminated navy, green and gold J-Note, measuring 14ft-high and 21ft-wide, was revealed on the outside of the newly renovated arena, while inside, visitors are now greeted by an 12,000sqft atrium, which houses the exclusive Jazz Team Store, redesigned lower and upper bowl concourses with new fully cushioned seats in the bowl, and destination dining restaurants.

The renovations to the Vivint Smart Home Arena are about more than concrete, rebar and new blue seats—it’s about enriching lives in our community. This arena will continue to bring our community together and serve as a light to the city, state and world for generations to come.

Greg Miller, Utah Jazz representative on the NBA Board of Governors, said:

The renovations to the arena and practice facility will play an important role in our pursuit of an NBA Championship. This will help develop, retain and recruit talent both on and off the court, and represents our family’s commitment to doing things the right way.

The first scheduled event in the renovated Vivint Smart Home Arena was the Tim McGraw and Faith Hill concert, held September 27, followed by a full array of Jazz games, together with upcoming shows from Katy Perry, Billy Joel, Lady Gaga and the Foo Fighters, as well as special events from the Harlem Globetrotters and Disney on Ice. As a community gathering place, the arena hosts more than 100 events annually with 1.8 million guests.

While no events were held at Vivint Smart Home Arena last summer, the facility was still abuzz each day as more than 2,000 workers (and estimated 500,000 hours) participated in the project, demolishing concrete walls, removing all the green plastic chairs and building new dining, club and social spaces. 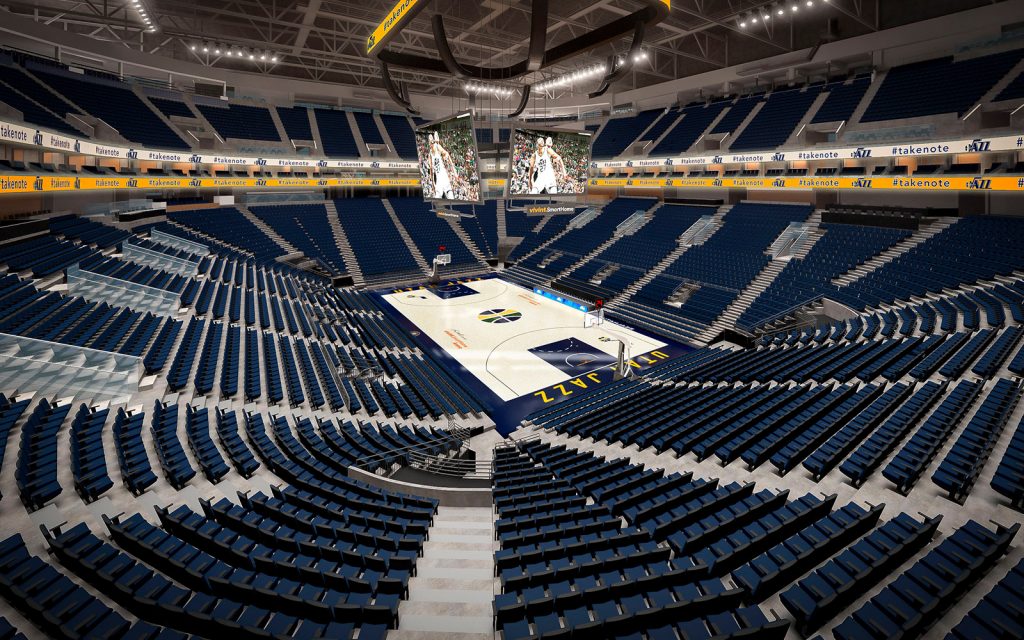 A tremendous transformation of the arena has resulted in a fan-focused sports and entertainment venue that will delight our guests. The reimagined arena features upgrades on all six levels from energy generating solar panels on the roof to revamped locker rooms on the ground floor. In between, fans will experience enhanced amenities from food offerings to rebooted technology.

With the renovation, visitors are finding a tremendous amount of open, connected spaces with unique things to see, experience and enjoy on every level, and outside. The plaza greets people with a supersized J-note as the centrepiece. 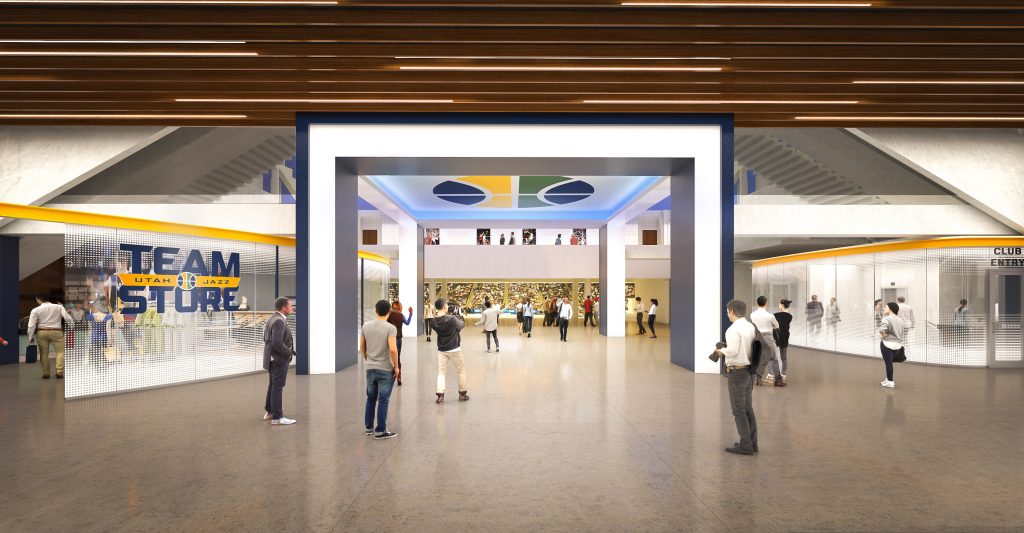 A new 12,000sqft America First Credit Union atrium has been added, with a 76ft-long video screen atop the foyer for outdoor watch parties.

The brand new lobby now provides the perfect location to gather with the box office, Utah Jazz Team Store full of unique arena-only merchandise and memorabilia, and easy access to the Toyota Club on level two and the suites on level four. Concourse walls have been removed for the creation of a new porch that gives fans a full view of the lower bowl. What they’re seeing now is an ocean of blue, with the iconic green plastic chairs being replaced by fully-cushioned seats in both the lower and upper bowls. Designed for style and comfort, the new seats are Jazz navy blue with a blue/black nylon weaved fabric. The fixed seating areas feature chairs with armrests and cup holders.

Fans are able to taste another change. A multitude of food selections – more than 30 restaurants and vendors – have created destination dining with a lineup of new culinary choices. The four corners of the main concourse at Vivint Smart Home Arena feature specialty menus with barbecue from R&R, hand-tossed pizzas from Maxwell’s, Mexican food from El Chubasco, and gourmet hamburgers and signature beef sandwiches from Cubby’s. 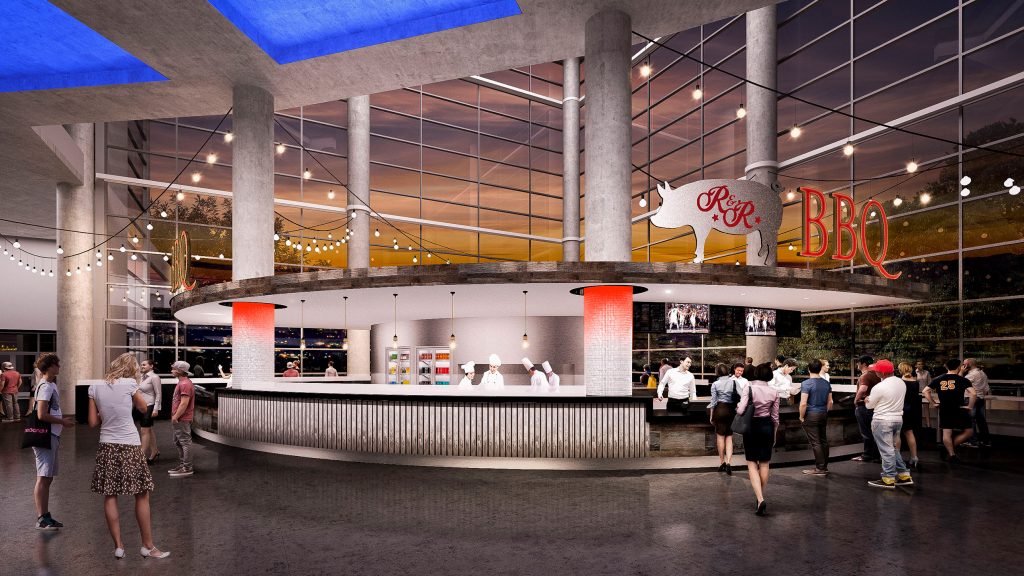 Working kitchens in the dining areas showcase the preparation of fresh food. Levy, one of America’s premiere sports and entertainment hospitality partners, has formed a joint venture with the arena to manage food and beverage experiences, and introduced Salted Honey Hospitality as its signature brand of service.

Another substantial upgrade for the arena is the formation of the Toyota Club, with gathering space for 1,700 guests. Located on level two behind the lower bowl seats, the club wraps around nearly two-thirds of the arena. The open floor layout has comfortable social spaces for a quick bite to eat or a full-service meal from an array of live cooking stations and new restaurant offerings. The club is open throughout Jazz games with eight portal entrances along with a members only main entry from the arena lobby.

The club experience at a Jazz game is unlike any other entertainment option in Utah. The WCF Insurance Club and the Silicon Slopes Club are additional specialty spaces that have been remodelled.

With its top-to-bottom approach for improvements and desire to implement sustainable practices, the renovation started on the roof with the installation of 2,700 Vivint Solar panels, covering 80,000sqft and producing the energy equivalency worth two seasons of Jazz home games.

The Jazz players also have a new ‘home away from home’ with the remodelling of the locker room complex and the addition of weight rooms, training rooms and family areas on level one.

Technology has also been deployed to enhance the guest experience through a new mobile app, high-speed public Wi-Fi, cloud-based technology and predictive analytics. More than 400 televisions are located throughout the arena, providing information, directions and a constant eye on what’s happening on the stage or court.

Vivint Smart Home Arena is the story of an arena rising to meet the expectations of its guests as a top destination for sports and entertainment events. The arena renovation is packed with amenities to create a world-class experience for our fans. There is a new energy around the building, and the improvements will be an eye-opener for people who have attended events in the past.

Located in downtown Salt Lake City, Vivint Smart Home Arena opened in 1991 as the homecourt of the NBA Utah Jazz and is well known for being one of the hardest places to play for visiting teams. With seating capacity of about 20,000, the facility is the largest, most high-tech arena within a five-state radius and was built faster than any other arena at the time of its construction in 15 months and 24 days. The basketball court is named in honour of Larry H. Miller.

Vivint Smart Home Arena is the site of a variety of sports and entertainment, including ice shows, dirt shows and concerts. The facility hosted the 1993 NBA All-Star Game, the 2002 Olympic Winter Games figure skating and short track speed skating competitions, and the NCAA men’s basketball tournament.

For more information, go to: www.vivintarena.com