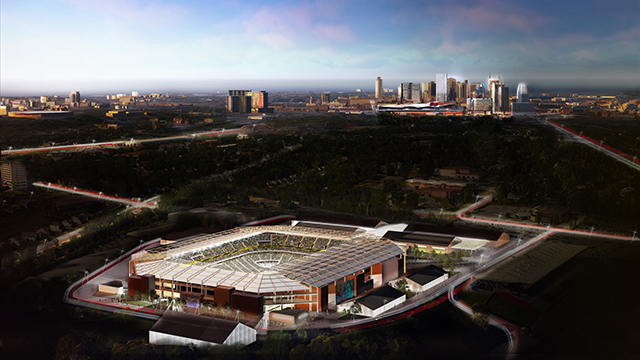 Funding has been approved for a 27,500-seat HOK-designed stadium that would be among the largest new soccer-specific Major League Soccer (MLS) stadiums built in the USA in recent years.

The Metro Sports Authority voted unanimously last Thursday to approve a US$225m bond resolution for a new MLS stadium to be built on the city’s fairgrounds site, clearing one more step before Mayor Megan Barry’s proposal heads to the Metro Council next month.

The overall price tag for the stadium is expected to be in the region of US$250m, with the sports authority to be the facility owner.

This is the best sports proposal, from the city’s perspective, that we’ve seen. The city has minimal financial risk. I think It’s a good opportunity for the city.

The stadium is an integral piece of the city and ownership group’s bid for an MLS expansion franchise. The proposed stadium will sit on the 117-acre fairgrounds site just south of downtown Nashville.

HOK designed the stadium as a multipurpose facility that can accommodate both soccer and American football should Vanderbilt University choose to move forward with a shared facility.

The stadium proposal calls for new ancillary buildings surrounding the 500,000sqft stadium, replacing a number of structures on the fairgrounds site.

Bonds for the project would only be issued if Nashville is awarded one of two MLS expansion franchises that the league plans to announce in December.

Vice Mayor David Briley has organised a public hearing on the MLS proposal that will take place October 24 at the fairgrounds.

The vote, “came after the Metro fair board earlier this week approved a resolution recommending the sports authority and council approve bonds for the project. Moving forward, the sports authority would need to still approve a lease agreement with the fair board. Bonds for the project would be issued if Nashville is awarded one of two MLS expansion franchises that the league plans to announce in December.”