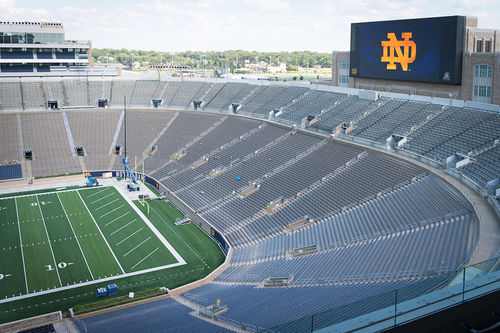 The Fighting Irish of the University of Notre Dame™ debuted their newly-refurbished stadium last month, which features Maine-made seats as part of a multi-million dollar project to enhance the fan experience and revitalise the stadium.

Enhancements to Notre Dame Stadium include outdoor club-level seating within the east and west buildings. Additionally, terraces adorn each of these buildings, allowing for a view of both campus and the playing field.

The most visible change involves the addition of a video board at the top of the south end of the venue, along with ribbon boards along the east and west sides of the stadium. Just as at Purcell Pavilion and the Compton Family Ice Arena, there will be no advertising or commercials associated with use of the video boards. The additional video boards allowed for the removal of the north scoreboard in order to enhance the view of the Word of Life mural on the Hesburgh Library.

Seating improvements included the addition of vinyl-clad benches throughout the stadium, replacing the wood bench seats, as well as an increase of the average space available for each fan from 16 inches wide to 18 inches. Other enhancements included improvements to the Wi-Fi network and existing sound system within the stadium; renovation of the restrooms, concession stands, lighting and signage; and an increase in the number of women’s restrooms.

HOK was a consultant to the architect of record, S/L/A/M Collaborative, providing design services for the sports, recreation and hospitality components of the Campus Crossroads Project, which will reposition Notre Dame’s legendary football stadium as a year-round hub for academics, athletics and student life.

Maine company, Hussey Seating, was awarded the contract for the seating replacement of the 80,000-seat stadium. Replacing the aging wooden bleachers are Hussey’s Perma-Plank, a durable roll-formed steel plank with Notre Dame Blue Perma-Cap bleacher covers. These covers are a resilient, maintenance-free, vinyl bleacher cover that will also fit over existing wood or aluminum bleachers.

Hussey Seating completed the upper bowl during the first stages of the renovations in 2016 and finished the lower bowl in August 2017. 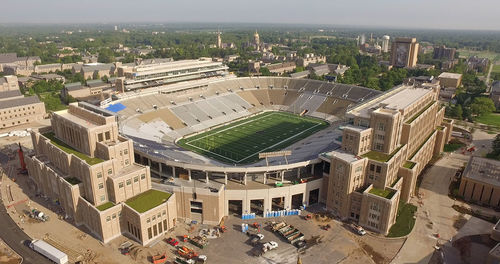 The Campus Crossroads Project is the largest building initiative in the history of the University of Notre Dame. Approximately 800,000sqft (/74,320sqm) of classroom, research, student life, media, performance, meeting, event, and hospitality space is being added via three buildings adjacent and attached to the west, east and south sides of Notre Dame Stadium. Construction began in November 2014 and the new spaces began opening last month.

Decades of campus expansion resulted in the iconic stadium becoming one of the most centrally located facilities on campus, and yet, it was used perhaps 10 times annually. Future expansion would only reinforce that fact. This plan to make the stadium a year-round hub for academic and student life is the result of 84 University representatives spending more than 3,000 collective hours studying. They were assisted by outside consultants with expertise in architecture, engineering, technology, food services, and student life. The project will take approximately 3,000,000 labour hours to complete.

On the west side, the Duncan Student Center will house student life and recreational facilities. To the south, O’Neill Hall will be the new home for the Music Department and the Sacred Music at Notre Dame program. On the east side, Corbett Family Hall will contain the anthropology and psychology departments, as well as state-of-the-art media facilities.

The exterior design is inspired by Knute Rockne’s original Notre Dame Stadium—which still stands today as the core of the facility—and is wed with materials, massing, and details taken from many of the Collegiate Gothic buildings on campus. The entire project includes sustainability practices consistent with other University projects, such as LEED certification, green roofs, and geothermal energy use.

In addition, numerous enhancements to the stadium – including improved concourse wayfinding and aesthetic enhancements, improved Wi-Fi and cellular capabilities, new seating in the bowl, and premium seating opportunities – will elevate the gameday experience for Notre Dame football fans.